Across The Wall: From Nationalism To Aggression 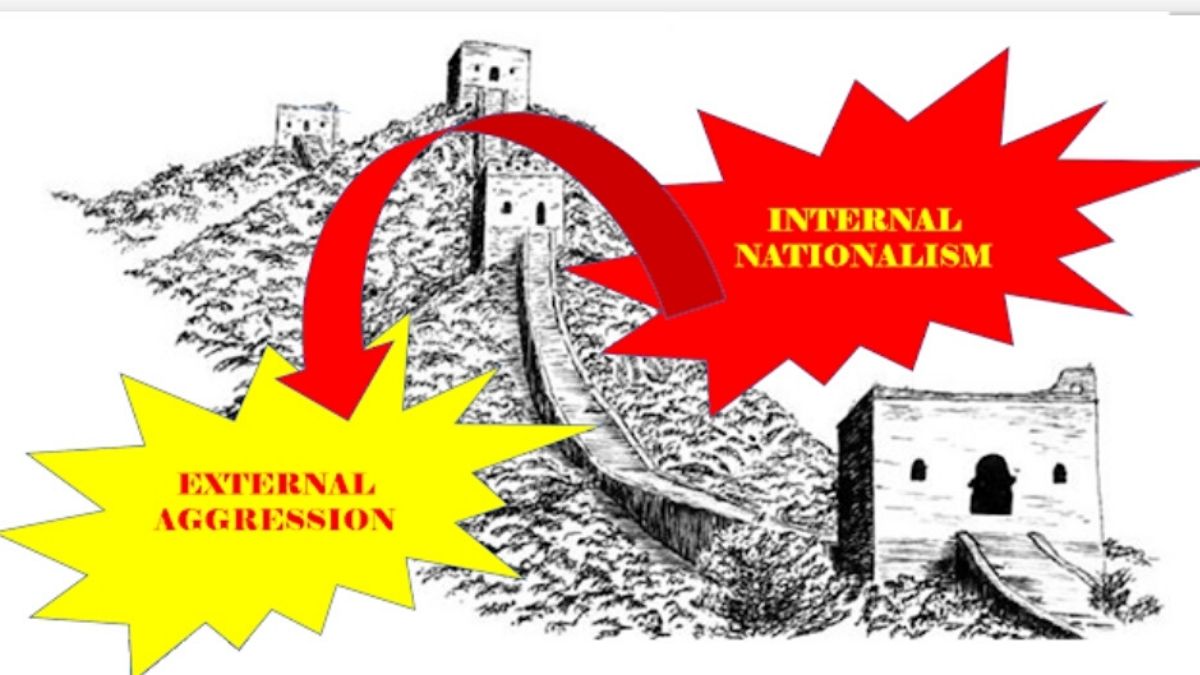 People are wondering as to where the ongoing Sino Indian Military standoffs along the LAC are heading. I am clear and confident that Indian Army will give a befitting reply under the circumstances. China’s actions are out of type and not routine.

There are three ongoing standoffs in the Northern Sector at Galwan, Fingers Area and Demchok. One standoff took place at NakuLa in the East. An instigation through Nepal at Lipulekh Pass is ongoing. It covers almost the whole LAC. Many reasons can be ascribed for this aggression against India – routine summer infringements, objection to border infrastructure improvement, Atma Nirbhar Abhiyan, tacit support to Taiwan, not joining RCEP, abrogation of Article 370, denial of investment in India. The Naku La and Galwan standoffs are out of place since they are in undisputed areas. The Fingers and Galwan area incursions are provocative. The standoff at Demchok is defensive in nature to thwart off any Indian reaction from there. The Western Highway is closest to Demchok. Overall these incursions are planned and coercive.

Let us step to the Far East. China sensed a strategic opportunity when others were battling Covid and it had come out of it. Hence China sunk a Vietnamese fishing boat and has been belligerent with Malaysia, Indonesia, Brunei, Philippines, Japanese and South Korea in the South and East China Seas and the Yellow Sea. It also heightened threats and calls of cross straits action against Taiwan when the US carriers were out of action for four weeks. The word ‘peaceful’ has been dropped from its Taiwan reunification plans. It has been carrying out extensive firing drills at sea. Now it intends to carry out major amphibious exercises in South China sea with both aircraft carriers. Intimidation and coercion.

China’s worst-case option is to get militarily engaged at its front door at Sea and rear door in Tibet thousands of Km apart in a pincer. Yet, that is exactly what it is doing through its provocation. Internally stoking high-pitched nationalism. Country under threat. Everyone is against us and are attacking us. We are strong enough to guard ourselves. However as the ante is raised, a sane voice emerges to calm things down. It happened when Qiao Ling, a known hawk, came up with advice of restraint and reasons not to invade Taiwan. Internally play the benevolent statesman.  Externally continue to coerce, bully, and frighten the target country to fall in line.

Diplomacy is supposed to calm things down and build bridges. However Chinese ‘Wolf Warrior’ diplomats in Australia, Germany, France, South Africa and other countries have done exactly the opposite. Being nasty and offensive. Similarly some voices of reason are cropping up. However the foreign minister is backing them publicly. The portrayal is tough diplomats who can hold their end up and talk down to democratic nations which are essentially weak. Stoking Nationalism.

The decoupling drive has taken shape. USA, UK, EU, Japan, India, and others have drawn up tangible time bound plans for decoupling. USA has started focused action to include withdrawal of US Government funds, blocking Huawei, blocking IPR theft and ‘Made in China 2025” plans, forcing US companies to set up facilities in the homeland. Alternative countries are being chosen. There is also talk of excluding Beijing from a new international economic order. People are talking of “de-sinicisation” and “deglobalization”. China is arguing to highlight the benefit and good effect of globalization Decoupling and relocation from China is pooh poohed. No one else can match China in Production, Quality, Efficiency, Cost, and time. How can the world live without that?  Their Efforts will end in failure. All this derision is internal show casing and stoking nationalism of Chinese superiority.

Examine the Pandemic. Bungling and hiding details including that of human to human transmission during initial stages were denied vehemently. Mention that Covid affected people could travel abroad when internal travel was banned is buried. When questions arose, China weaponized trade to intimidate and coerce nations. USA was reminded that it was dependent on China for medical supplies. Australian beef was banned. EU was arm twisted to tone down and more. When its propaganda failed it promised 2 bn USD to WHO. It seemed to cooperate by agreeing for an inquiry when the situation stabilizes. Which means never. External compromise achieved. Internally all shows highlight great leadership, China saving the world, the Serbian President kissing the Chines flag, ungrateful democratic systems like USA suffering since they are weak. China the greatest. USA in decline. China’s time has arrived. Stoking nationalism again.

The ordained Middle Kingdom mindset is the bedrock of nationalism in China. Despite that why is China revving up nationalism to such unprecedented levels? Nationalism can be stoked for many reasons to include diverting focus away from failure, covering up a miscalculation, superiority and overconfidence in own ability and exploiting a fleeting strategic opportunity. In the case of China it is a mix of all. It might have started to seize an opportunity but is probably ending up covering failure. The major contributory factors need understanding since aggression against India is part of this jingoist approach.

China is facing a job crisis of unprecedented proportions. Their PM mentioned job 38 times in his speech to the NPC. Around 6% unemployment is for the organized sector. New graduates have few jobs. Migrant labor is badly hit. Overall assessment is that 20% of the population is unemployed. Many in jobs have taken massive pay hits. It implies 20-30 million out of jobs. Unrest is on the cards. In democratic countries it could result in change of governments and that would be acceptable. Not in China where the CCP must stay in power. Hence the issue must be diverted to external threat and nationalism.

A recession and contraction of the economy is anticipated.  Growth targets are not even mentioned. The Chinese are bracing for a collapse of exports and are turning to internal consumption. That has not happened so far. People have drawn money from banks, kept it at home and are not spending. Internal consumption? Ominous sign. Chinese debt is 317% of its GDP. Most of this debt is held by government controlled financial bodies. Cannot be disposed since it is all paper transaction and hollow.  Their military budget has stood virtually still. Their R&D spend has decreased. In such conditions recourse to hyper nationalism is natural to divert attention.

Hong Kong situation is getting complex. The new national security law is a violation of the status accorded to Hong Kong by the Treaty with UK till 2047. Hence mistrust and the reaffirmation that China will not live up to any international treaty/commitment is reinforced. Hong Kong has reunited the Western democracies against China. That was fragmenting recently. Very importantly unrest and crackdowns are within Chinese Borders with potency to morph and spread. China will externalize the situation through nationalism in another incident.

Despite all the hype and hoopla surrounding China, it is set to miss all targets of the great China Dream. In fact the Virus has finished off the era of great strategic opportunity and has had China scrambling for worst case scenarios. Instability is part of this shift. Overall, nationalism to externalize the situation is attractive to China even if it means misery to people. If the situation is externalized, the CCP will stay in power. Misery to the people is not unacceptable or new in China. CCP out of power is new and unacceptable. Their media had also reported that the Indian Army efficacy was affected by the pandemic. Hence China has probably miscalculated badly to take advantage of a nonexistent situation. If it can coerce India, lot of things fall into place – markets, breaking of the anti-china alliance, showing a competitor in poor light, and sending signals to lesser countries to fall in line. We need to react accordingly.

While many scenarios can be thought of, a major conflict is virtually ruled out. There is force parity on the Himalayan ridge line. If anything, we might be better off. The Army component of PLA is less than 50% of the overall 2.3 million strength. That means force parity at macro level with Indian Army also. For a major offensive, China needs force preponderance of 6-9 in the Himalayas. It simply does not have the numbers. A minor offensive can be responded to. Indian asymmetric and non-conventional responses in Tibet and Xinjian are many if the situation arises. The border infrastructure has improved tremendously hence troop movement and reinforcements are better facilitated. When I last served there a decade and a half back, reaching Galwan and Fingers in strength involved mounting an expedition. Today one just drives in there, as per reports. The Himalayas rules out many domains. One must fight mostly on the ground. Chinese inexperience will eventually show out. This will be a protracted affair whose outcomes are unpredictable at best. Then of course the IAF has a distinctive edge. Indian Artillery has gained in strength. If the Chinese attempt to shift more troops into the area it will leave them vulnerable at the front door. The front door has greater priority and sensitivity – Taiwan, South China Sea, and overseas assets. A weakening and others will pounce. Most importantly, Armed Forces are one time wonders at present. Fire it once and it cannot be reloaded. Can china risk that?

Resolution by Force – A Non-Starter

Then there is a major issue. After 1962, China or any other country has not been able to resolve anything by force with India. Even in 1971 when USA brought USS Enterprise into the Bay of Bengal, we did not flinch. The last time China tried something funny with India at Doklam, they hit a wall and had to be given an exit route without loss of face. Any loss of face will be severe in the current conditions. In my opinion the Chinese will start talking peace once they find that that the odds are against them – which they are. They can consult their Rusted Iron Brother and learn that the India is a tough nut to crack. There are two likely outcomes. The standoff ends at a table and China withdraws to resume as an unmanned LAC or we end up with a manned LAC.

The Revenge of the Virus

The Virus has a bearing on the whole affair. The longer the virus lasts the farther will be the start of Chinese recovery and more will be the Chinese instability. The Virus has shown no signs of abating nor is it amenable to CCP dikatats. There is no doubt that the Virus has affected democracies more than China. However, democracies have learned to live with it, reopen their economies, start their path to progress to the new normal despite the Virus. China, on the other hand has done only one thing. Shut down drastically at the hint of an outbreak. The people and the government do not know how to exist with it. The new normal for China is a draconian shut down every time the virus makes its presence felt. Some part of the Chinese jigsaw will always be shut hereafter and its recovery will always be incomplete. The virus from Wuhan seems to be having the  last laugh – it has put its master , China , in international isolation.

Lt Gen PR Shankar was Indian Army’s Director General, Artillery. He contributed significantly to the modernisation and indigenisation of artillery. He is now a professor in the Aerospace Department of IIT Madras and is involved in applied research for defence technology