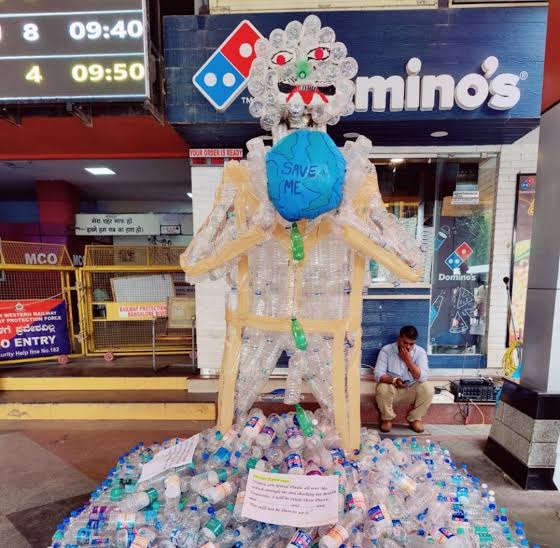 In all the metropolitan cities of India, waste management has been one of the biggest challenge, especially in public places like bus stands, railway stations and airports. The South Western Railways in Bengaluru has conducted a unique management drive for waste disposal at the railway stations to spread awareness about the issue. The drive drew PM Narendra Modi’s attention and he appreciated the efforts made by the South Western Railways through Twitter.The staff of Krantivira Sangolli Rayanna(KSR) railway station collected the plastic waste that was littered around the railway station and made a sculpture out of the plastic waste on Monday. A placard at the sculpture read, “This sculpture is made of thousands of plastic water bottles, which were collected in the last 12 hours. All these plastic bottles were thrown in and around the railway station.”The sculpture, which is made of plastic bottles is demon shaped and is grabbing attention of public as it is places at the entrance of the busy railway station. A post on the official Twitter handle of South Western Railways read, “Sculpture made from plastic & pet bottles at KSR Bengaluru Station to create awareness on proper disposal of plastic waste (Sic).”Prime Minister Modi too was impressed by the efforts of the railway officials and called it a commendable idea. He wrote, “Such efforts are not only innovative and commendable but most importantly remind us of our basic civic duty of keeping our surroundings and public places clean (sic).”