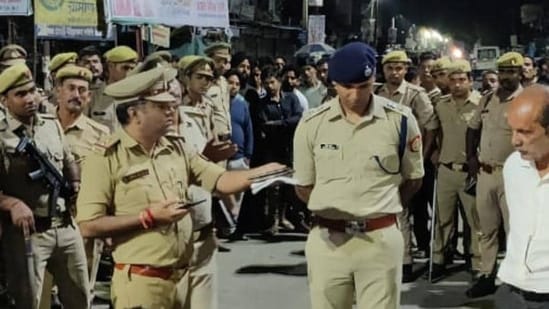 Six people have been arrested in connection with the death of two minor sisters from the scheduled caste community who were discovered hanging from a tree in the Nighasan police station limits of Lakhimpur Kheri district on Wednesday evening.

According to SP Lakhimpur Kheri Sanjiv Suman, one local villager, Chhotu Gautam, and five youths from a nearby village have been arrested in the case. Junaid, Sohail, Hafezul Rehman, Karimudeen, and Adil were identified as residents of neighbouring Lalpur village. The police official briefed the media on the arrests and the sequence of events, stating that Sohail and Hafeezul Rehaman raped and murdered the girls while Chhotu acted as a facilitator. According to the police, the girls had an affair with Junaid and Sohail.

Kareemudeen and Adil, the remaining two accused, assisted the other three in disposing of the bodies.

During a police encounter, Junaid was reportedly shot in the right leg in retaliation.

SP supplement Arun Kumar Singh previously stated that an FIR had been filed against Chhotu and three unidentified youths under Indian Penal Code sections 302 (murder), 323 (voluntarily causing hurt), 452 (criminal house trespass), and 376. (for rape). Sections 3 and 4 of the Protection of Children from Sexual Offenses Act (POCSO) were also included. According to Singh, the FIR was filed based on the sequence of events described by the girls’ mother and the allegations levelled by her.

Local villagers and the girls’ families accused three men of kidnapping and murder and staged a protest near the village’s Nighasan crossing. The mother of the girls claims that three kids from a nearby village on a bike kidnapped the two sisters while they were cutting fodder near a hutment.

The Uttar Pradesh government came under fire from opposition leaders after the deaths of two minor sisters. Congress general secretary Priyanka Gandhi Vadra questioned the “increase in heinous crimes against women” in Uttar Pradesh, claiming that “false advertisements in newspapers and on television” do not improve the law and order situation.

“The incident of murder of two sisters in Lakhimpur (UP) is heart-wrenching. The relatives say that those girls were abducted in broad daylight,” she tweeted in Hindi.

“Giving false advertisements in newspapers and TV every day does not improve law and order. After all, why are heinous crimes against women increasing in UP?”

In the nude photoshoot case, Ranveer claims that the images posted online were tampered with