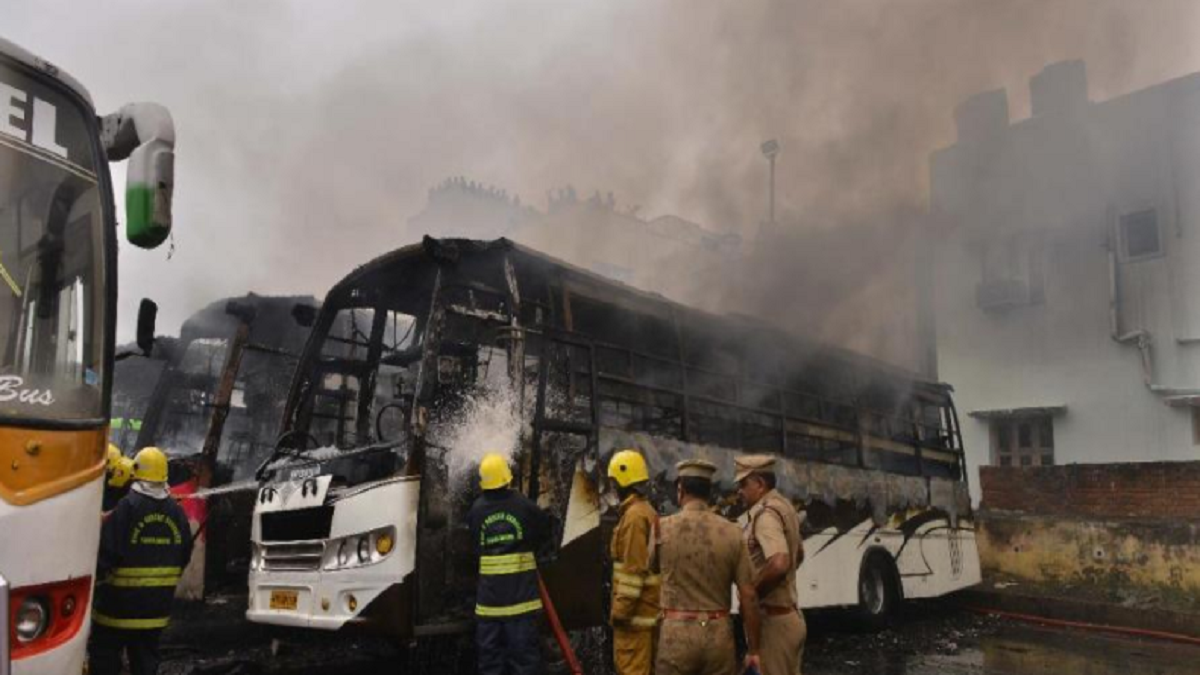 Five buses went up in fire mysteriously on Sunday afternoon. The buses remain parked in the yard for the past five months due to restrictions in operating interstate and intrastate buses without proper maintenance or security.

Around 50 buses were parked in the Koyambedu bus terminus when the locals noticed thick smoke emulating from the parking yard and informed the fire department. Fire engines were rushed to omnibus terminus from Koyembedu and Anna Nagar fire stations and over five water tankers were used to douse the fire. The entire operation lasted for more than 30 minutes and out of the five buses three completely burnt down despite the efforts of the fire service personnel.

Though the reason behind the fire accident is not known immediately, fire department personnel believe that there are no reasons for the buses to catch fire on their own as these were not operated in the last five months. Officials added that only investigation will reveal the truth. They are suspecting the involvement of miscreants as the area is not accessed by the bus operators.

Due to the surge in the Covid-19 cases in Tamil Nadu, the state government had prohibited installing of idols in public places or taking out a procession for the immersion of idols. This decision was vehemently opposed by BJP and other pro-Hindu groups.

Even after repeated requests and BJP state president meeting the CM and requesting to allow Vinayagar Chaturthi celebrations, the government stuck to its stand and turned down the requests. Pro- Hindu organisations like Hindu Munnani openly dared the government that they will install 1.5 lakh idols as planned for the celebrations. Even the appeals made before the High Court were not fruitful but the court allowed the individuals to immerse the idols in water bodies barring Marina Beach in Chennai.

Hindu Munnai members installed idols in few pockets of Chennai, Coimbatore and in a few other districts. All the idols which were installed in public places were seized by the police and over 20 people were arrested for violating the government order. They even tried to take out processions.

War of words broke out between the ADMK and the BJP over the government’s decision to prohibit Vinayagar Chathurthi celebration and was seen as a flash point between both the alliance partners.