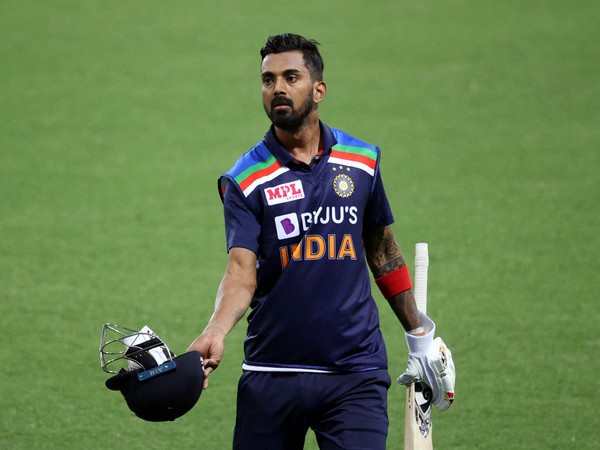 Ahmedabad (Gujarat) [India], March 16 (ANI): Batting coach Vikram Rathour on Tuesday said that three failures will not change the fact that KL Rahul is the best Indian batsman in the shortest format.
Opening batsman KL Rahul has recorded scores of 1,0 and 0 in the first three T20Is against England. Virat Kohli played an unbeaten inning of 77 to guide India to 156/6, but the total did not prove enough as Jos Buttler and Jonny Bairstow made light work of the chase to hand England a victory by eight wickets in the third T20I. Buttler and Bairstow remained unbeaten on 83 and 40 respectively.
“Anybody can have a lean phase, in the last year, KL has been our best batsman in the T20 format. He is averaging more than 40 with a strike rate of more than 145. Three failures do not change the fact that he is maybe our best batsman in this format. He has done really well for us in the past year, this is the time we need to support him as a team, absolutely sure he will come back,” said Rathour while replying to a query by ANI during a virtual press conference.
Answering a question about Kohli possibly being a long-term option to bat at number four in the shortest format, Rathour replied: “Nothing is long-term, we are just experimenting. This is the last series before the World Cup. This could be the last T20 games we could be playing as a group so we are just experimenting a little, we are trying new options, we will see where Virat has to bat. He is so experienced that he can bat at any number. We will see closer to the World Cup where we want Virat to bat.”
When asked whether it is getting difficult for India to assess what score is good enough while batting first, Rathour said: “It is a difficult surface to assess what will be a good score, it is little sticky when you start batting, the ball stops. Today also, we saw some variable bounce, it is a tough surface to bat first and assess how many runs need to be scored. We have to play two games now, hopefully, in the next game, we can do better if we bat first.”
Rathour also said that having too many options is not a problem as the team management is aware of what is the best playing XI in the shortest format.
“That’s a good problem, it’s great that we have this kind of bench strength. People are doing well, we have a lot of players who can fill up the places, but again we know as team management, we understand what is the best playing XI, and what eleven we need to back. We should stick to our best XI and hopefully it will come good,” said Rathour.
With the win in the third T20I, England has now gained a 2-1 lead in the five-match series. Both teams will now meet in the fourth T20I on Thursday which will be played at the same venue. (ANI)