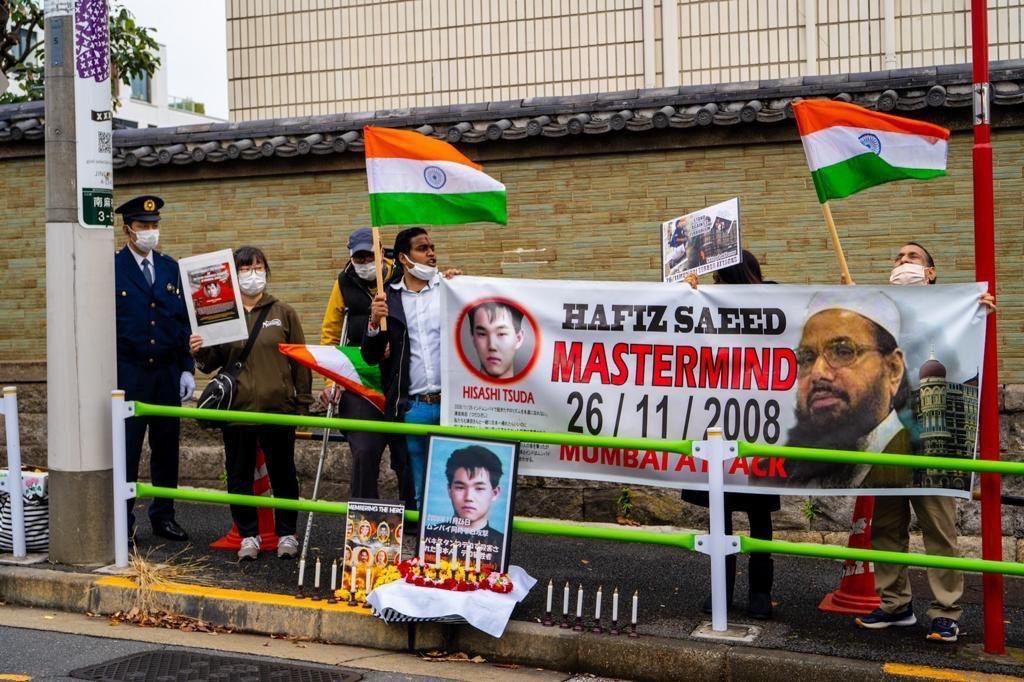 As the Mumbai terror attack completes 14 years, people are protesting calling for justice. Hundreds of people gathered in front of the Pakistan Embassy in Tokyo to hold protests and paid tribute to 166 victims killed by Pakistan-supported terrorists.
People demanded justice and emphasised that the main perpetrators, planners, and masterminds of the despicable and inhuman act continue to wander freely in Pakistan, accusing Pakistan of harbouring and protecting terrorists. The protesters demanded that Pakistani authorities prosecute Hafiz Saeed, the leader of Lashkar-e-Taiba. The demonstrators displayed pictures of Hafiz Saeed and Hisashi Tsuda on banners and flags of India.
“Hafiz Saeed Mastermind 26/11/2008 Mumbai attack,” the message on the banner read. People chanted slogans like “Bharat Mata ki Jai”, “We want justce” and “26/11 terrorists must be hanged,” while calling for action against terrorists. Protesters also paid tribute to Hisashi Tsuda, a Japanese citizen who was one of the victims of the terror attacks in Mumbai.
In the meantime, a group of Belgian-based members of the Indian diaspora arranged a memorial service for the 26/11 Mumbai terror attacks at the Schuman roundabout in front of the European Commission in Brussels. On Saturday, the gathering was staged under the slogan “Solidarity Against Terrorism.” Members of the Indian diaspora excitedly attended the event despite the poor weather.
In addition to expressing sympathy to the victims of the Mumbai terror attack, the attendees urged the whole community to hold those responsible for the crime accountable by holding this gathering. They informed the international organisations that, regardless of where they resided, Indian Communities were made up of peace-loving individuals who would always reject terrorism and injustice.
Participants commemorated the 26/11 terrorist attacks in Mumbai by carrying Indian flags and various banners. Notably, the three-day siege in Mumbai started on November 26, 2008, when ten terrorists from the Lashkar-e-Taiba (LeT) organisation murdered 166 people, including 18 security personnel, and injured over 300 others.
According to External Affairs Minister S Jaishankar, India is collaborating with a number of nations whose citizens perished in the 2008 Mumbai terrorist attack. He also added that this will ensure that the actual perpetrators do not get away.
Jaishankar said, “It’s an occasion where the entire country remembers it. I want to underline how strongly we feel about it and determined we are to complete the process of justice.”
EAM Jaishankar added, “Today is the anniversary of the 26/11 terror attack in Mumbai. Even after so many years, the people who planned and oversaw it have not been punished. They have not been brought to justice. This is something which we give utmost importance to.”