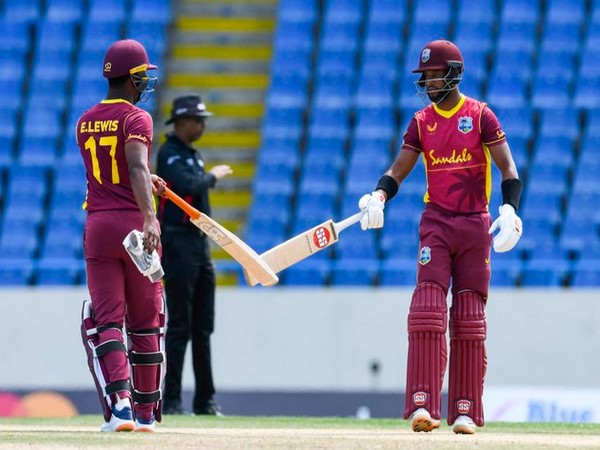 St John’s [Antigua], March 11 (ANI): Shai Hope and Evin Lewis played knocks of 110 and 65 respectively as West Indies defeated Sri Lanka by eight wickets in the first ODI of the three-match series on Wednesday (local time) here at the Sir Vivian Richards Stadium.
Chasing 233, Windies got off to a fantastic start as openers Hope and Lewis put on 143 runs for the first wicket. Sri Lanka had no answers for the duo and both Windies batters put on 143 runs inside 29 overs.
Sri Lanka did manage to dismiss Lewis (65) and Hope (110), but in the end, Darren Bravo (37) and Jason Mohammed (13) guided the hosts to an eight-wicket win with 18 balls to spare.
Earlier, a spirited bowling performance helped the West Indies bundle out Sri Lanka for just 232 here in the first ODI. Opting to bat first, Sri Lanka openers Danushka Gunathilaka and Dimuth Karunaratne provided the visitors with a steady start as the duo put on 105 runs for the first wicket inside 20 overs. However, the complexion of the match changed dramatically as Windies skipper Kieron Pollard took the limelight.
First, he produced a stunning caught and bowled to send Karunaratne (52) back to the pavilion, and then Gunathilaka (56) was dismissed in the most bizarre fashion. Gunathilaka was adjudged out after the umpires found him obstructing the field and this decision did not amuse any as Sri Lanka head coach Mickey Arthur was seen arguing with the match referee.
After Gunathilaka’s dismissal, Pathum Nissanka (8), Angelo Mathews (5), and Dinesh Chandimal (12) were sent back to the pavilion in quick succession, reducing Sri Lanka to 151/5 in the 32nd over.
Ashen Bandara (50) kept the scoreboard moving at one end, but none of the other batsmen stood with him at the crease for a long time and in the end, Sri Lanka was bundled out for 232 inside 49 overs.
Brief Scores: Sri Lanka 232 (Danushka Gunathilaka 56, Dimuth Karunaratne 52, Jason Holder 2-39); West Indies 236/2 (Shai Hope 110, Evin Lewis 65, Dushmantha Chameera 2-50). (ANI)