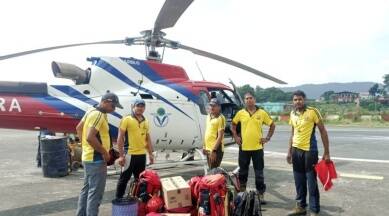 According to Uttarakhand’s chief minister, Pushkar Singh Dhami, up to 28 people could be trapped in an avalanche that struck Draupadi’s Danda-2 mountain summit on Tuesday.

The imprisoned people, who are all students at the Nehru Mountaineering Institute in Uttarkashi, are the subject of rescue operations. An avalanche reportedly struck the team this morning around 9:00.

At the earliest, rapid relief and rescue operations are being carried out by the district administration, NDRF, SDRF, Army and ITBP personnel along with the team of NIM to rescue the trainees trapped in the avalanche in Draupadi’s Danda-2 mountain peak,” tweeted the chief minister, Dhami.

A team from the SDRF has hurriedly arrived at the Sahastradhara Helipad in Dehradun to rescue the trainees caught in an avalanche for rescue activities.

CM Dhami claimed that he had called Rajnath Singh, the defence minister, and asked for the army’s assistance in accelerating the rescue effort.

He has assured us that he will give us every possible help from the centre. A rescue operation is being conducted to bring out everyone,” Dhami said.
Meanwhile, Defence Minister Rajnath Singh also took to Twitter and expressed his anguish over the loss of lives and consoled the bereaved families who lost their family members.
“Deeply anguished by the loss of precious lives due to the landslide which has struck the mountaineering expedition carried out by the Nehru Mountaineering Institute in Uttarkashi. My condolences to the bereaved families who have lost their loved ones,” Rajnath Singh said in a tweet.
“Spoke to CM Uttarakhand, Shri @PushkarDhamiand took stock of the situation. Rescue operations are underway to help the mountaineers who are still trapped. I have instructed the IAF to mount the rescue and relief ops. Praying for everyone’s safety and well-being,” Singh said.