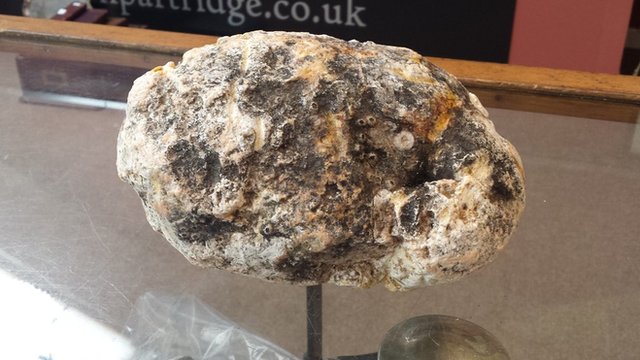 The Uttar Pradesh Police Special Task Force arrested four members of a gang from Lucknow that was smuggling ambergris.

During the raid, the STF found 4.12 kg of whale vomit in their possession which costs Rs 10 crore.

Meanwhile, the sale of whale vomit is illegal under the Wildlife (Protection) Act of 1972. Whale vomit is a sought-after component of perfumes.

Taking to Twitter UPSTF tweeted, “On 05.09.2022, four members of a gang involved in smuggling of Ambergris banned under the Wildlife Protection Act were arrested from Gomtinagar Extension Area police station in Lucknow with 4.120 kgs of Ambergris worth Rs.10 crore.”

Moreover, “whale vomit,” is also known as “grey amber” and “floating gold,” which is one of the strongest natural occurrences in the world.

Reportedly, earlier in July this year whale vomit worth Rs 28 crore was spotted by a group of fishermen in Kerala and they give it over to local authorities after which they received praise from everyone.

Several people have been taken into custody for selling ambergris illegally this year. This solid, waxy substance is smuggled because it is more expensive than gold.

However, in the digestive system of sperm whales ambergris is produced which is utilized in cosmetics and medications. Ambergris is also known as whale vomit.