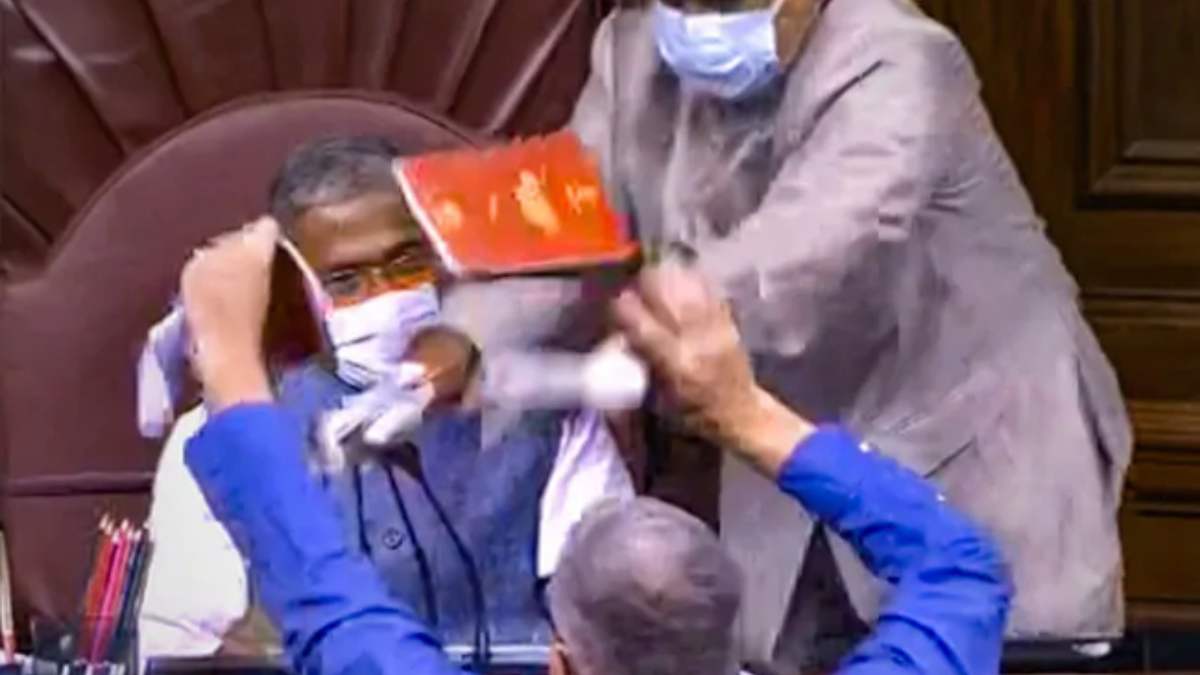 Pandemonium ruled in the upper house of Parliament when two crucial farm bills — the Farmers’ Produce Trade and Commerce (Promotion and Facilitation) Bill, 2020, and the Farmers’ (Empowerment and Protection) Agreement on Price Assurance and Farm Service Bill, 2020 — were passed by voice vote.

After the passage of the bills, Prime Minister Narendra Modi called it a water- shed moment in the history of Indian agriculture, which will ensure complete trans- formation of the agriculture sector as well as empower crores of farmers. “For decades, the Indian farmer was bullied by middlemen but this bill will liberate the farmers with such adversities. It will add to the impetus to the efforts to double the income of farmers and ensure greater prosperity for them,” said Prime Minister Modi. To dispel doubts from farmers’ minds, the PM emphatically added that the system of MSP will remain and government procurement will continue.

However, the passing of the two farm bills was far from smooth. TMC MP Derek O’Brien was seen waving a copy of the rulebook agitatedly before Deputy Chairman Harivansh Narayan Singh’s face. Moments before the bills were passed, he tweeted, “They cheated. They broke every rule in Parliament. It was historic day in the worst sense of the word. They cut RSTV feed so the country couldn’t see. They censored RSTV. Don’t spread propaganda. We have evidence. But first watch this.”

SAD MP Naresh Gujral too launched a scathing attack on the government and said, “I want to tell farmers that Parliament is giving me two minutes because our party MP quit the government to protect farmers’ rights… now farmers feel that their interests are being sold to corporates and big business houses. Don’t think that the farmers of Punjab are weak.” Manoj Jha of the RJD said that if the bill is passed then it will be like “writing the obituary of the farmers”. “This won’t be restricted to Haryana and Punjab, it will go to Bihar,” he commented.

Meanwhile, Congress MP Ahmed Patel said that the BJP is “researching the INC manifesto, and now must understand how to interpret it… We want to ease agri-trade only after providing five safeguards for farmers. We challenge the BJP to introduce these”.

The majority of Opposition parties were of the opinion that the bills should be sent to the select committee. Former PM and JD(S) MP H.D. Deve Gowda also questioned the need for passing the bill during a pandemic and asked the PM to explain the short- and long-term benefits of the bills and how they will help in doubling farmers’ incomes.

Agriculture Minister Narendra Singh Tomar said that the discussion on the bills was going in the right direction and would be passed with full majority. After the bills were passed, BJP president and RS MP J.P. Nadda said, “This is a historic occasion and under the leadership of PM Modi, we have been able to pass this bill. This bill will help the farmers to break the shackles of 70 years of exploitation.”

Criticising the mayhem which took place in the Rajya Sabha, Nadda said that it was deplorable and the way things unfolded is a matter of shame for Opposition parties. “It shows that they have no faith in democracy,” he said. He also reiterated that MSP has been offered to farmers in the past, is in force now and will remain so in the future and that government procurement will continue. Apart from Nadda, all top Cabinet ministers also tweeted in support of the bills.

Later, Vice President M. Venkaiah Naidu held a meeting with Harivansh Narayan Singh and Pralhad Joshi at his residence to discuss the ruckus which took place in the house and the possible action to be taken against the dissenting members.