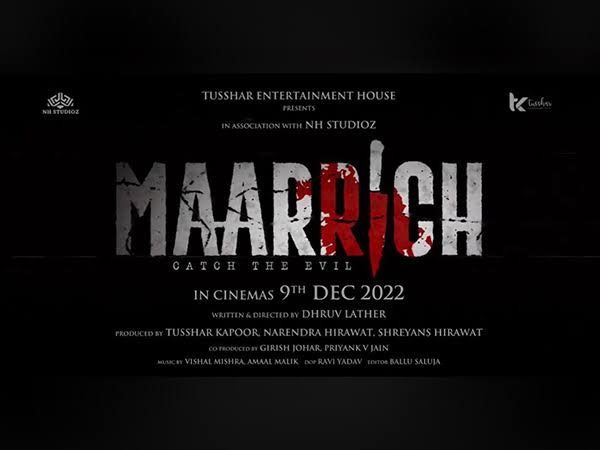 The official trailer for the upcoming mystery-thriller movie “Maarrich” was released on Friday.

Production company Tusshar Entertainment House uploaded the trailer to Instagram, captioning it, “2 brutal murders, 6 suspects, and a fearless cop on a hunt to find the killer!. The chase to catch evil begins. Watch the “Maarrich” trailer now. #CatchTheEvil Maarrich in cinemas 9th December, 2022.”

The anticipated murder mystery movie “Maarrich,” directed by Dhruv Lather, is scheduled to open in theatres on December 9, 2022.

In addition to Tusshar, Naseeruddin Shah also has a significant role in the movie.

Talking about the film, Tusshar earlier said, “This film is very close to my heart for multiple reasons. ‘Maarrich’ is my second film after ‘Laxmii’ as a producer, and I am also going to be reuniting with Naseeruddin Shah Saab after a very long time. The film has challenged me as an actor on many levels as it’s very different from the work that I have been associated with earlier, I hope the audiences like this new shade of mine. Super excited to bring Maarrich to the audiences in cinemas on 9th Dec.”

“My second movie as a producer after  ‘Laxmii’ is ‘Maarrich,’ and I’ll be reuniting with Naseeruddin Shah Saab after a very lengthy separation. As the movie is very different from the work I was previously associated with, it has presented me with many acting challenges. I hope the audience enjoys this new side of me. I’m incredibly happy to introduce Maarrich to moviegoers on December 9th.”

Tusshar Kapoor’s second movie as a producer is “Maarrich,” following the horror comedy “Laxmii,” starring Akshay Kumar, which had its world debut only on Disney+ Hotstar.

In the meantime, Tusshar will be making his big-screen acting comeback with “Maarrich” after a four-year absence. Balaji ALT.

Naseeruddin Shah, on the other hand, will also be seen in the upcoming dark comedy film “Kuttey” alongside Arjun Kapoor, which is slated to release on November 5, 2022.