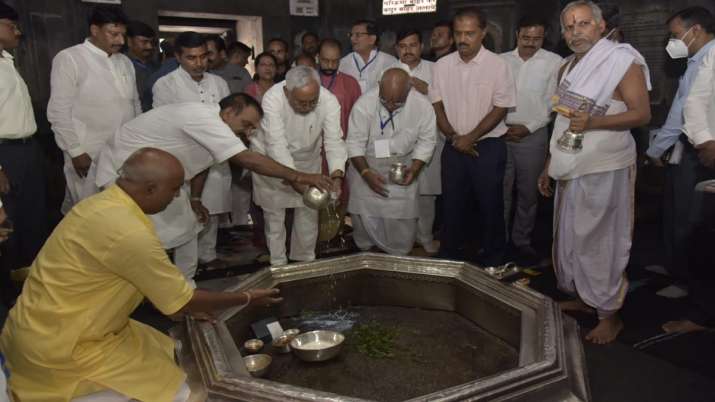 The BJP’s Gaya district unit conducted a purification ceremony of the Vishnupad temple here amid a row over the entry into the sanctum sanctorum of a non-Hindu minister of the new Bihar government.

The row erupted after Bihar minister of Communication and Information Technology Mohammad Israil Mansuri, during a visit to Gaya with chief minister Nitish Kumar, entered the Vishnupad temple’s sanctum sanctorum.

“Entry of the non-Hindu minister was done intentionally to hurt the sentiments of Hindus,” Sharma said.

Sharma said that the minister had gone inside despite instructions put up outside the temple wall that non-Hindus wouldn’t be allowed entry.  A complaint was also filed in the Muzaffarpur chief judicial magistrate court on Monday by a social activist against chief minister Nitish Kumar, Mansuri, and four others.

Danraj Sharma accused CM Nitish Kumar of insulting the Hindu faith and said that the Hindu community will never forgive him.

“Nitish Kumar knowingly took Mohammad Israil Mansoori inside the temple. He was there inside the ‘Garbhgriha’ (sanctum sanctorum) for so long. All this, despite the fact that it is written outside the premises that non-Hindus aren’t allowed inside. This is a complete insult to the Hindus. Lord Vishnu will never forgive him. His political end is near. Because of all this, we performed the Shudhikaran Pooja today,” Sharma told the press.

“CM Nitish Kumar knows that entry of non-Hindus is not permitted inside the ‘Garbhagriha’. He did it deliberately to mock Hindus. It’s part of a conspiracy. He should apologise to Hindus,” said Jaiswal.

Nitish Kumar took office as Chief Minister on August 10, after leaving the National Democratic Alliance (NDA) and forming a government with the Rashtriya Janata Dal (RJD) in a coalition known as the “Mahagathbandhan.” He had accused the BJP of trying to destroy its ally parties. RJD leader Tejashwi Yadav also took an oath as the Deputy Chief Minister.