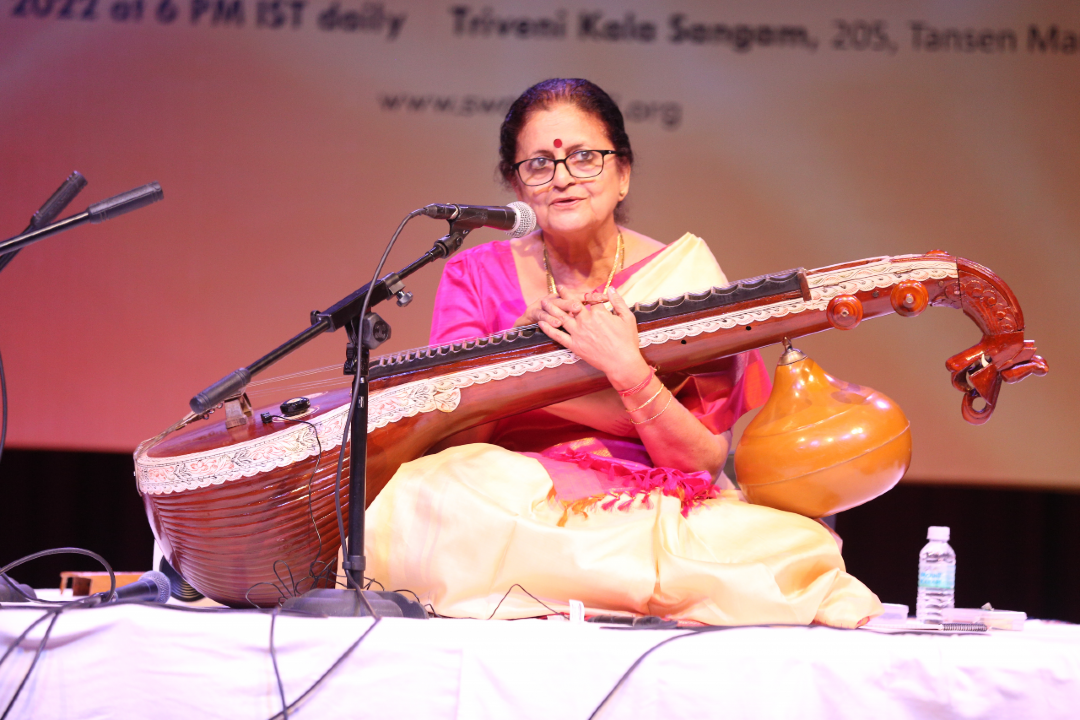 With the intent to nurture budding artists and Indian music Swaranjali a Delhi based art and cultural society organises concerts for students several times in a year. The organization is a collective of students of Indian classical music and dance, aimed at providing them a platform to exchange knowledge about the various disciplines, styles and encourage collaboration. On the occasion of Azadi ka Amrit Mahotsav, Swaranjali Delhi hosted a two days Indian classical music event called ‘Colours of India’ curated by Subrata De. The event highlighted a galaxy of artists from various states who performed on 24th and 25th September at Triveni Kala Sangam. The event on Saturday featured eminent carnatic veena player Vidhushi Jayalakshmi Sekhar with Trichy Dr. K. Murali on Ghatam and Kumbakonam N. Padmanaban on Mridangam from Chennai. This was followed by a vocal recital from Delhi based artist Ravi Pal with Pradip Kumar Sarkar on tabla and Lalit Sisodia on harmonium. The last event of the day included Soumitra Thakur on sitar from Delhi with Durjay Bhaumik on tabla accompaniment. The event on 25th featured Subhasis Bose from Kolkata who played Hansaveena with Susamoy Mishra on tabla accompaniment. This was followed by a tabla solo recital by Shri Amitava Sen of Jamshedpur with Juned Khan on Sarangi and then the concluding performance was given by Vidhsuhi Dr. Tanuja Nafde on vocal from Nagpur, accompaniment by Lalit Sisodia on Harmonium with Debasish Adhikari on Tabla. In a candid conversation sitar artist Soumitra Thakur said, “It was an honour to have performed for Colours of India 2022, an evening of Indian Classical Music organised by Swaranjali Delhi. Despite of heavy lashes yesterday in Delhi there was a very good turn up in the audience and the audience consisted of all music learners of Delhi. I played Raag Bageshree, where I started with Alap, Jor and Jhala and then played 3 compositions. I was accompanied on the tabla by maestro Durjay Bhaumik. The event was exceptionally curated by sitar maestro Subarata De and his team. My heartiest congratulations to all the members of the society Swaranjali for organizing such a successful event.” Every year Swaranjali hosts Gharana Festival, Pravasi Bharatiya Sangeet Nrittya Mahotsav, Shraddhanjali, Murchhana Festival to encourage budding artists.