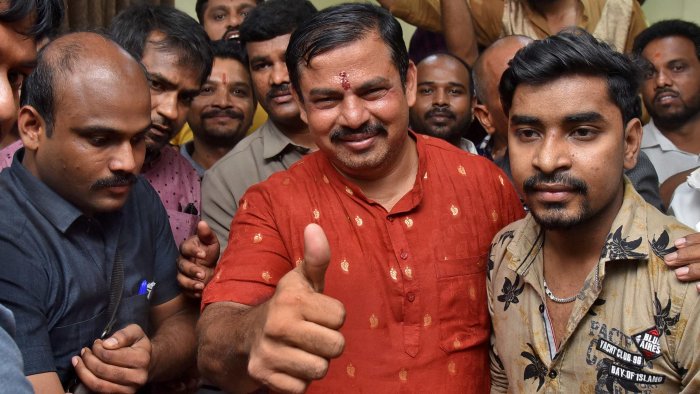 Suspended BJP legislator T. Raja Singh was arrested again on Thursday, apparently in connection with “old cases”. Hyderabad police served a notice to the legislator under section 41 of CrPC.

Amid the ongoing turbulence in Telangana following protests against suspended BJP leader T Raja Singh for his alleged derogatory remarks against Prophet Muhammad, the security near the Charminar was strengthened on Thursday.

This came in the wake of a massive protest here on August 23. Earlier, a large crowd of protesters gathered at Shalibanda in Hyderabad over the alleged remarks of the suspended BJP leader. The police took the situation under control after a lathi charge.

Hours before his detention for alleged remarks on Prophet Mohammed, suspended BJP leader accused Telangana Minister KT Rama Rao of pursuing vote bank politics and said that he had targeted only Munawar Faruqui, not any religion in his previous video.

Singh also slammed Asaduddin Owaisi, alleging that the AIMIM chief “had a hand in igniting communal violence” and that “police have become a puppet of Owaisi”. Protests erupted in Telangana following the alleged remarks by the suspended BJP leader on Prophet Mohammed. Singh was arrested on Tuesday and was released following court orders. He was detained today by police.

In the latest self-made video, Singh claimed he had protested against the conduct of the programme of comedian Munawar Faruqui in Hyderabad, and had urged Minister KTR not to allow the event to take place. However, he alleged that KTR allowed the programme to take place dismissing his request “due to the vote bank politics”.

“What is the reason behind the communal atmosphere that is there in Telangana today? Various things are

He claimed that he had “not taken the name of Prophet anywhere in that video” and had only targeted Faruqui.

No proof of use of Pegasus spyware, says SC appointed committee