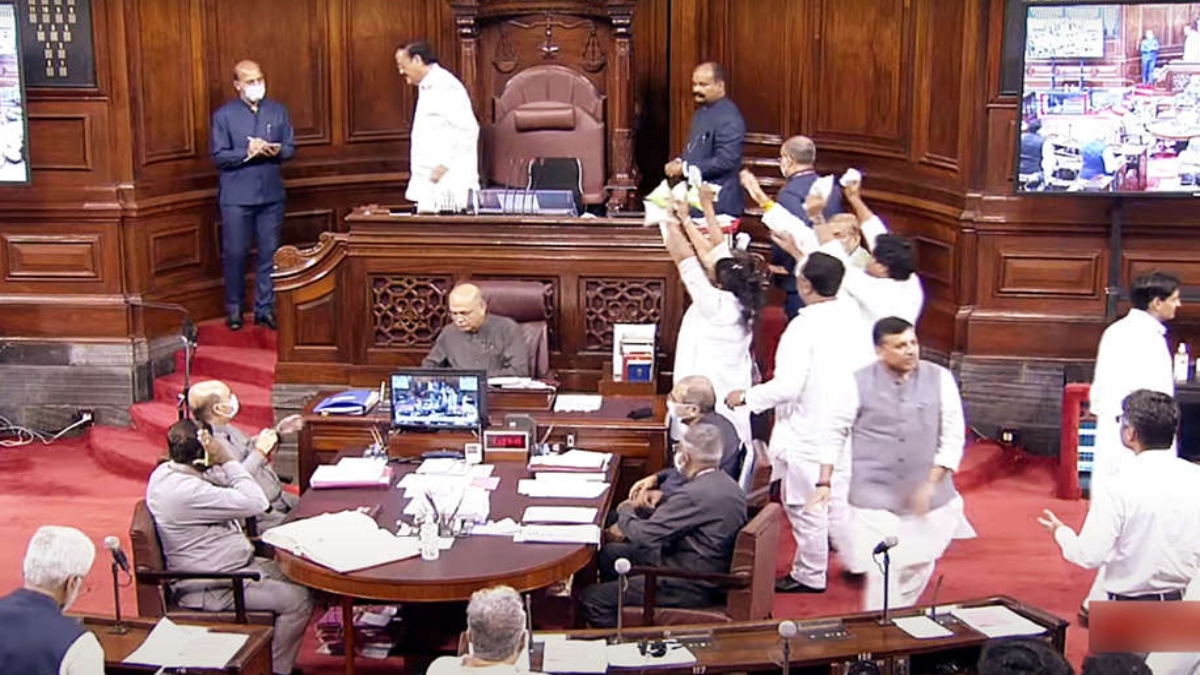 The Rajya Sabha on Wednesday was adjourned for the day as the Opposition continued to create a ruckus on increased GST on food items and rising inflation issues. The Upper House will resume again at 11 am on Thursday. Earlier in the day, opposition parties disrupted the proceedings following which the Upper House was adjourned till 2 pm.

Shortly after Leader of Opposition in the Parliament Mallikarjun Kharge began addressing the issue amid chaos, Upper House Chairman Venkaiah Naidu adjourned the House till 2 pm. The Upper House was adjourned without any business as the Opposition raised issues for an immediate discussion.

The Lok Sabha also witnessed ruckus and sloganeering by Opposition parties following which it was adjourned till 2 pm.

Both the Houses of Parliament are witnessing repeated adjournments following the ruckus by the Opposition leaders since the commencement of the Monsoon session on 18 July.

On the repeated adjournments of both the Houses of the Parliament by the Opposition, Union Minister Smriti Irani on Wednesday took a dig at Congress leader Rahul Gandhi, saying that Wayanad MP who has been politically unproductive is now hell-bent on ensuring to bring down the productivity of Lok Sabha. Irani specifically attacked Rahul Gandhi, saying, “A gentleman who has made his political collogue to ensure that productive debate does not take place in Parliament had a chequered Parliamentary history. As the Amethi MP he never posed any questions in Parliament once he abandoned Amethi and went to Wayanad his attendance in the Winter Session of Parliament in 2019 was merely 40 per cent.”

The BJP MP remark came ahead of the third day’s proceedings in the Monsoon Session, the BJP hit out at the Opposition, accusing it of “disrespecting Parliament, bringing down its productivity”.

Speaking on the bill amid interruptions by Opposition members who wanted to raise the issue of price rise, External Affairs Minister S Jaishankar said the Act prohibits unlawful activities in respect of biological, chemical and nuclear weapons and their delivery systems. He said the bill will strengthen India’s credentials and global image.INTERVENTION HELPED COOL OFF ONION, TOMATO PRICES: GOVT

The all-India retail price of tomato has registered a 29% decline over the last month as arrivals of the staple vegetable into the mandis improved with the onset of monsoon rains, a Ministry of Consumer Affairs, Food, and Public Distribution statement said. Besides, the retail prices of onions are also largely under control, trading at 9 per cent below last year’s level. Onion and tomato are two key staples used in Indian kitchens.

Beating past records, the Central government has procured 2.50 lakh tonnes of onion as a buffer for the 2022-23 season. The buffer size of onions for the current year is 0.50 lakh tons higher than the 2.0 lakh tons procured during 2021-22. The onions that were procured from the current rabi harvest season are meant for price stabilization in case the rates go up significantly during the lean supply season.

There have been several instances in the past when prices of onion shot up sharply, thereby needing urgent government interventions — including imposing stock limits on traders or restrictions on exports. Rabi onion harvested during April – June accounts for 65% of India’s onion production and meets the consumer’s demand till the Kharif crop is harvested in October-November.

“The procurement for the buffer has helped in preventing mandi price of onion from crashing this year despite a record production of 317.03 lakh tons reported by Department of Agriculture & Farmers’ Welfare,” the statement said.