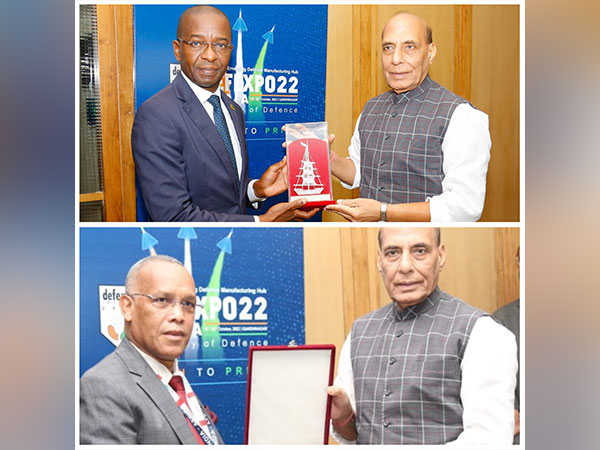 Indian Defence Minister Rajnath Singh held a bilateral meetings with his counterparts from Mozambique and Madgascar on the sidelines of DefExpo 2022. The Defence minister tweeted,”Glad to interact with the Defence Minister of Mozambique, Mr Cristovao Artur Chume on the sidelines of #DefExpo2022.” Rajnath singh stated that he had a fruitful discussion with Madagascar Defence Minister Lt. General, Rakotonirina Leon Jean Richard. Earlier, Singh was giving a speech at the DefExpo 12 event called “Invest for Defense.” From this edition forward, the event has been added to the Defense Expo.

The Ministry of Defence claims that the purpose of the event was to encourage domestic and international original equipment manufacturers to invest in the country’s defence industry. In order to make doing business in the defence sector easier, it will also highlight the needs of the armed forces and government policy improvements.

“We have to create healthy environment for our investors that will not only give them good returns but also give them recognition in domestic and global markets,” Singh said.

To boost the domestic domestic sector, the Minister said the government has allocated capital acquisition for defence procurement.

“The Government is aiming to increase Defence production from 12 billion US dollars to 22 billion US dollars by the year 2025. We are making all efforts to protect our domestic industry from unfair foreign competition in the domestic market. Simultaneously, we are making efforts to get market access for domestic business in foreign countries so they can capture markets outside India,” he said. He further added,”Our defence industry is going through an important phase. Our industry has showcased its capabilities by manufacturing fighter aircraft, aircraft carriers, main battle tanks and attack helicopters. The current era is a golden period of the Indian defence sector.”