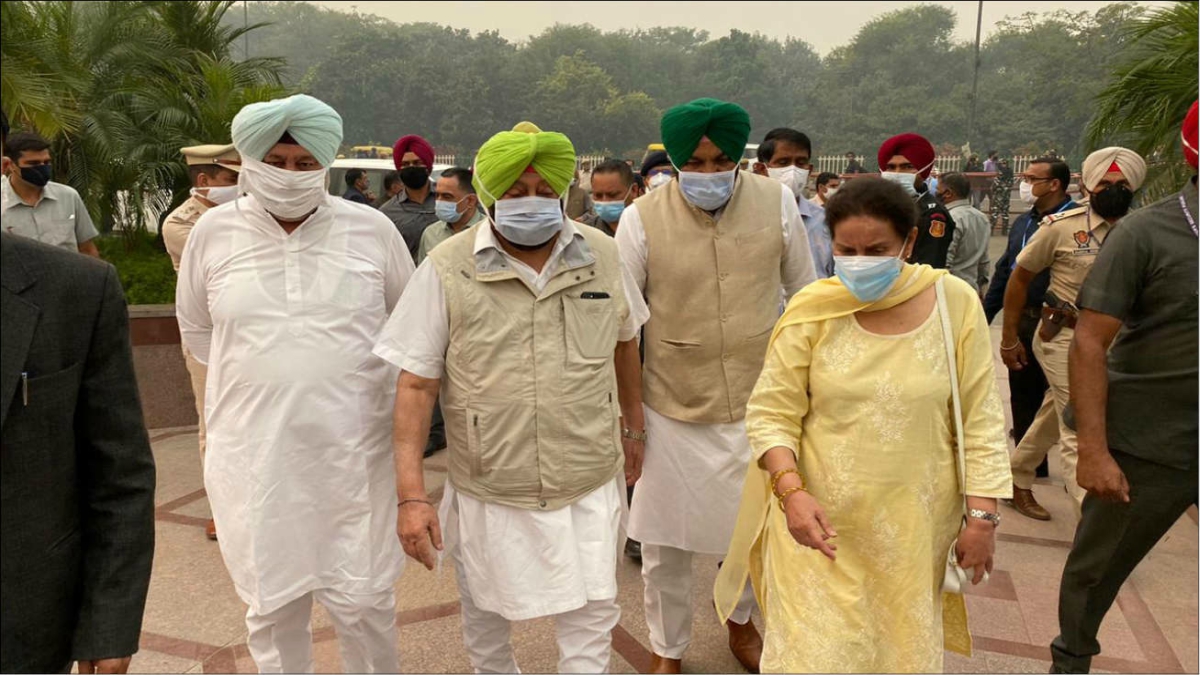 Punjab Chief Minister Captain Amarinder Singh on Wednesday launched a ‘mission’ from Delhi’s Rajghat “to save Punjab and its farmers”. Slamming the Centre for its ‘step-motherly treatment’ towards the state, he said that the Governor has still not forwarded the state farm amendment bills to the President weeks after they were presented to him following their unanimous passage in the Vidhan Sabha.

He said that the Punjab Governor was still “sitting over” another Bill (Punjab State Legislature (Prevention of Disqualification) Amendment Bill, 2019) of his government submitted a year ago. Captain Amarinder proceeded to Jantar Mantar from Rajghat to kickstart a relay dharna of Punjab Congress MPs and MLAs.

He was joined by Lok Insaf Party legislator Simranjit Singh Bains, as well as Punjabi Ekta Party MLAs Sukhpal Khaira and Shiromani Akali Dal (Democratic) MLA Parminder Singh Dhindsa. The Aam Aadmi Party (AAP), he said, had been pressured not to join the relay dharna, as their government in Delhi had not passed amendment bills to protect the farmers. “Though they had earlier planned to hold a relay dharna at Rajghat they had to shift to Jantar Mantar as Delhi Police imposed Section 144 at the memorial of the Father of the Nation,” Amarinder said.

After paying respects to Mahatma Gandhi at Rajghat, the Chief Minister in media interaction lamented that the President had declined to give him time to draw his attention to their grave concerns.

Accompanied by Congress MPs from Punjab, who alone were given permission by Delhi Police to visit Rajghat along with him, the Chief Minister said the state had not been paid GST dues since March and its constitutional guarantee of Rs 10 crore was also pending. He added that the Disaster Relief Fund had also been stopped by the Centre. “We don’t have money, our coal stocks are over,” he said, asking “how can we survive in this situation?”

The CM said he had spoken to Railway Minister Piyush Goyal, who had asked for a guarantee of safety for goods trains. He said “that was not even necessary as the farmers themselves had allowed movement of supplies, except for two private plants where they were still blocking the lines to the coal shutters.”

Replying to a question, the CM said the Akalis had indulged in a farcical drama over the Central legislations for farmers to protect their political interests. They will be back with the Bharatiya Janata Party (BJP) before the next Assembly elections in Punjab, he predicted.

Rejecting outright allegations of `anti-nationalism’ against Punjab’s farmers, Amarinder Singh said he was not in Delhi to confront the Centre but to fight for justice for the poor farmers, whose livelihood is at stake due to the central farm laws.

Asserting that “we are here not to disturb peace but to preserve it,” the CM said he and other MLAs from Punjab were forced to come to Delhi as the President had declined their request for a meeting on the plea that the state amendment Bills were still lying with the Governor.

The Chief Minister said it was his duty to apprise the President of the country of the situation on the national and food security front. As far as the state’s Bills were concerned, he expressed the hope that the President will give full assent to them, following the precedent of the then President Pranab Mukherjee, who had assented the Bills passed by BJP-ruled states under Article 254 (II) on suggestion from Arun Jaitley.

He reiterated his warning that any move by a government to tinker with religion or livelihood of the people was bound to trigger resentment and anger. The farmers are protesting because the new laws of the central government will destroy them, he said. He said that as Home Minister, he was aware of the threat at the borders, with Pakistan smuggling drugs and weapons for terrorists and gangsters into Punjab through 1-3 drones every day. If trouble erupts in Punjab, the entire nation’s security would be at stake, he added.