Politics over Chhath puja intensifies in Delhi - The Daily Guardian 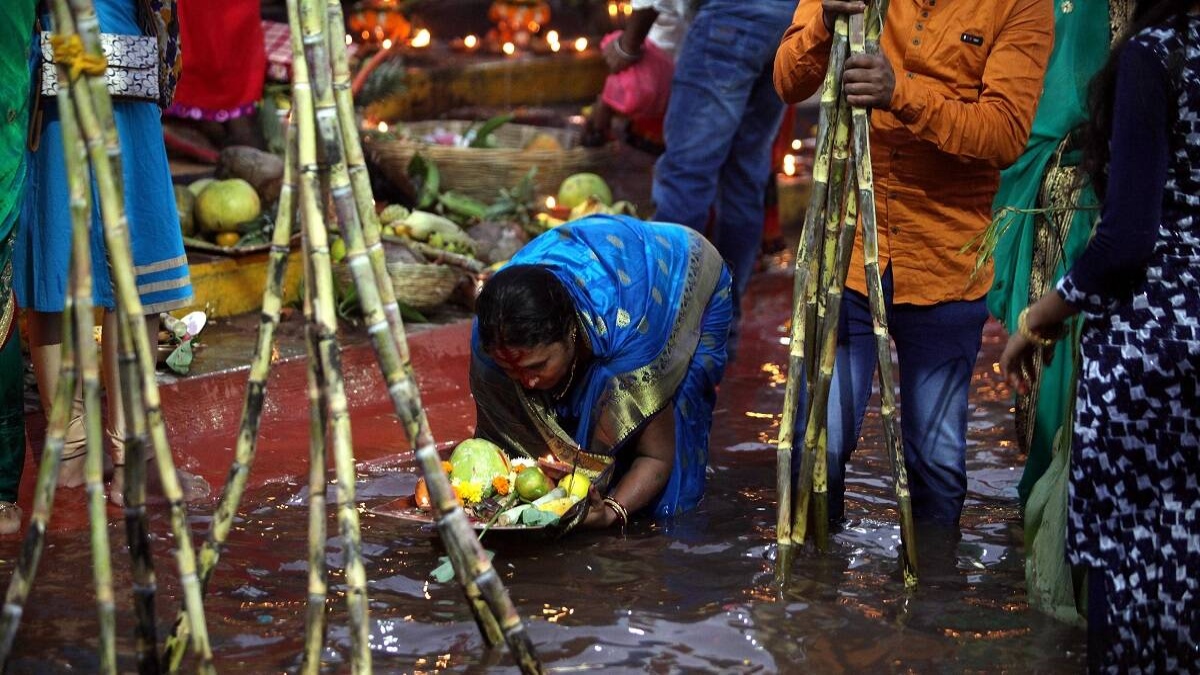 As devotees were seen taking their holy dip on the polluted and frothy Yamuna River in Delhi, the politics over Chhath Puja celebrations intensified in Delhi with both the BJP and the Aam Aadmi Party (AAP) engaging themselves in a war of words over pollution and puja restrictions in the National Capital.

The BJP has blamed the Arvind Kejriwal led AAP government in the national capital for putting in Covid restrictions and banning Chhath devotees to come and offer their prayers across the Yamuna riverbank. The BJP has also blamed the AAP government for the increase in the pollution levels in the Yamuna which has turned a large part of the river’s water into poisonous froth floating on the water surface in the river, making it unfit for human activities.

However, despite the increasing pollution levels in Yamuna, devotees were seen taking the holy dip on Monday and Tuesday as per traditions and customs to begin their fast of 36 hours before they offer their prayers to the Sun God on the evening of 10 November and the morning of 11 November.

Tiwari’s boat ride was live telecasted on his social media page, which highlighted how toxic foams were seen floating across the river in the Kalindi Kunj area. “The Arvind Kejriwal government has failed the people of Delhi. We have now come to know why this Kejriwal government has restricted Chhath Puja in the ghats here on the Yamuna. It is to hide his failure as the CM who failed to clean the river, it was to hide these visuals of the polluted river from the media and the people. Arvind Kejriwal has been exposed today. His government has done nothing for the last seven years.” Manoj Tiwari said.

West Delhi BJP MP Parvesh Sahib Singh Verma defied the Delhi government’s ban of Chhath puja celebrations on the ghats and riverbank of the Yamuna and led a delegation of Purvanchalis to one of the ghats on Yamuna to offer prayers.

The Delhi Disaster Management Authority (DDMA) has put in restrictions to celebrate Chhath puja on the banks of river Yamuna citing Covid-19 concerns. “If Chhath puja is not celebrated on the ghats, where will it be celebrated? It is the duty of the government to ensure ghats are cleaned, but Kejriwal only wants to hide his incompetence.” Verma said.

The AAP has also hit out at the BJP and has blamed the BJP for playing politics over festivals and people’s emotions. AAP’s Purvanchal unit chief and MLA Sanjeev Jha said that the BJP has been playing “dirty politics” to score their brownie points. “The AAP government has not put any restrictions on the Chhath Puja, it is the DDMA who has put the restrictions. The DDMA is headed by the Lieutenant Governor of Delhi, and he is controlled by the BJP, so therefore everyone knows who is playing politics. On the other hand, the AAP government has created 800 ghats for Chhath Puja across Delhi along with providing them with every facility. The BJP is doing politics because MCD elections are due to be held next year and they want to win the sympathy of the Purvanchali voters.” Sanjeev Jha told The Daily Guardian. Raghav Chadha, Vice Chairman of Delhi Jal Board has also hit out at the BJP, saying that the foam on river Yamuna is a “gift to Delhi” by the BJP ruled Haryana and Uttar Pradesh. He said, “The foam which we see on the Yamuna is near the Okhla barrage area, which comes under the UP irrigation department and it is the responsibility of the UP government to clean it, but like every year they failed this year too.”

MAMATA REJIGS CABINET, KEEPS FINANCE, HOME AND HEALTH TO HERSELF

Gehlot writes to PM for further cut in excise duty on petrol, diesel