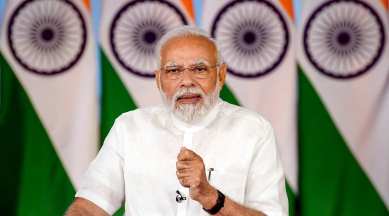 Prime Minister Narendra Modi will embark on a short trip to Karnataka and Kerala on September 1-2, said officials on Thursday.

The visit will include PM Modi marking his presence at Sri Adi Shankara Janma Bhoomi Kshetram, the holy birthplace of Adi Shankaracharya, at Kalady village near Cochin Airport at around 5. 15 PM today. After that, at around 6 PM, the Prime Minister will lay the foundation stone and dedicate to the nation various projects of Kochi Metro and Indian Railways worth over Rs 4,500 crore. On September 2, the Prime Minister will commission India’s first indigenous aircraft carrier INS Vikrant at Cochin Shipyard Limited in Kochi.

In what will mark a significant step towards self-reliance in the defence sector, Modi will commission the first indigenously designed and built aircraft carrier as INS Vikrant.

Thereafter, the Prime Minister will inaugurate and lay the foundation stone of projects worth around Rs 3,800 crore in Mangaluru.

During the event, he will also unveil the new Naval Ensign (Nishaan), doing away with the colonial past and befitting the rich Indian maritime heritage.

The Prime Minister will inaugurate the Phase I extension of the Kochi Metro Rail Project from Petta to SN junction. The total cost of the project is over Rs 700 crore. Kochi Metro Rail project will be one of the most sustainable metro projects in the country with nearly 55 per cent of its energy needs being met by solar power.

“The Prime Minister will lay the foundation stone for the Phase -II stretch of the Kochi Metro rail project from JLN stadium to Infopark, having a length of 11.2 kilometres and covering 11 stations. The total estimated cost of this project is around Rs. 1,950 crore. The proposed Phase II corridor of the Kochi Metro Rail Project is aimed at catering to the growing transportation needs of Kochi City and is planned in such a way that it connects the District Headquarters, Special Economic Zone and IT Hub of the city with the existing metro rail network,” read a statement by Prime Minister’s office.

SCHOOLS, COLLEGES SHUT IN 4 TN DISTRICTS DUE TO HEAVY RAIN