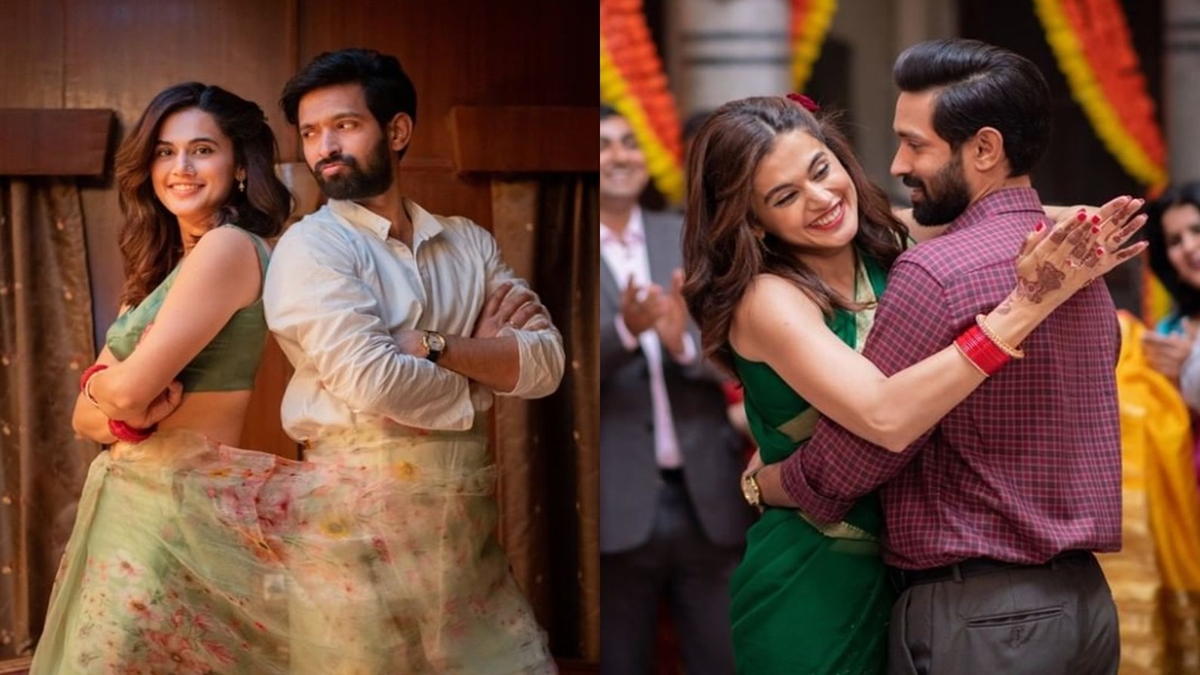 Haseen Dillruba, the latest offering from Netflix India, begins on a note of suspense. Just as the film’s female protagonist Rani (Taapsee Pannu) is about to enter her house, there is a huge explosion which kills her husband Rishu (Vikrant Massey). The misogynistic police officers don’t think twice before arresting Rani for plotting to kill her husband with the help of her lover Neel (Harshvardhan Rane). Since there is no murder weapon and the lover has escaped the scene, they grill Rani as hard as they can. They seem least interested in arresting the lover. After all, he is a man in a patriarchal society. But an example needs to be made out of the woman. So the case in charge, Inspector Rawat (Aditya Srivastava of CID fame), doesn’t leave any stone unturned. Writer Kanika Dhillon’s narrative follows a nonlinear structure with the events leading to the explosion unfolding in flashbacks as narrated by Rani to the inspector. When she refuses to plead guilty, the inspector even gets his female officers to brutally torture her. And when all his efforts fail he also forces her to take a polygraph test. But, all the while Rani proves to be the epitome of stoicism. Having passed the ultimately test of patriarchy, almost everyone around her gradually begins to see her with respect that was never accorded to her prior to the torture.

Haseen Dillruba is produced under the banner of Aanand L Rai’s Colour Yellow Productions and Bhushan Kumar’s T-Series with Rai, Kumar, Himanshu Sharma and Krishan Kumar serving as co-producers. The duo of Rai and Sharma is responsible for films such as Tanu Weds Manu, Raanjhanaa, and Tanu Weds Manu Returns. Now, there’s a great passage early on during the flashbacks when Haseen Dillruba’s screenplay stations itself in the familiar Rai-Sharma territory. It suddenly becomes a film about marriage that an average Indian viewer craves for. After all, it’s a time tested formula in a diverse and colorful country loves to see. It is no secret that festivities are an innate part of our lives. And marriage functions are the grandest of them all. For us, marriage is just not a union of two individuals but it’s an alliance of two families. It’s an occasion that gets everyone excited—be it the children, the young, or the old—for it is perceived as the greatest celebration of life. In short, the marriages are a singularly viable business. For Indian filmmakers, it’s a bankable subject like no other and no one understands this better than the Rai-Sharma duo. So, it’s really no surprise that Haseen Dillruba works best when it operates in the familiar Rai-Sharma territory. But, the moment its screenplay drifts into the Hitchcockian domain of mystery and suspense, it begins to lose its edge. It would really be interesting to find out how much influence the Rai-Sharma duo exercised on the film.

Now, a major trouble with the film is that Vinil Mathew’s direction fails to match the fast tonal shifts as well as the temporal and spatial fluctuations of Dhillon’s ambitious screenplay. It feels as if there is a huge gap between the screenplay and the director’s interpretation of the text. Speaking of the screenplay, Kanika Dhillon is known to borrow ideas from literary classics. While a 17th century French folklore called “Bluebeard” served as base for her screenplay of Judgementall Hai Kya, for Haseen Dillruba she looks towards Roald Dahl’s short story ‘Lamb to the Slaughter” for inspiration. Also, there are striking similarities to Michael Cristofer’s 2001 film Original Sin starring Angelina Jolie and Antonia Banderas. Some may also find a few similarities to Bryan Singer’s 1995 film The Usual Suspects. And the character of Rani is a huge fan of a local writer of pulp thrillers named Dinesh Pandit. So there’s actually a lot going on. The end result is a half-baked mishmash of ideas and genres

The film’s strongest point is the performances of the three lead actors. While the interesting pairing of Taapsee Pannu and Harshvardhan Rane holds a lot of promise, the screenplay somewhere lets them down. But, the duo certainly deserves another movie together given the promise they show here. It is Vikrant Massey who surprisingly owns Haseen Dillruba. From starting his career in television to playing hero’s sidekicks (Lootera and Half Girlfriend) to stints at character driven roles (Death in a Gunj, Lipstick Under My Burkha, and Chhapaak) to playing a boy next door character in Ginny Weds Sunny to portraying a well fleshed out protagonist with anti-heroic shades in Haseen Dillruba, Massey has indeed come a long way. During his performance, he goes through an entire gamut of emotions that reminds one of a young Shah Rukh Khan at the beginning of his career. Massey can simply use Haseen Dillruba as a vehicle to catapult himself to newer heights of stardom. But he must continue to show the same consistency with his selection of roles.

SHAH RUKH KHAN TO HAVE TWO RELEASES IN 2022