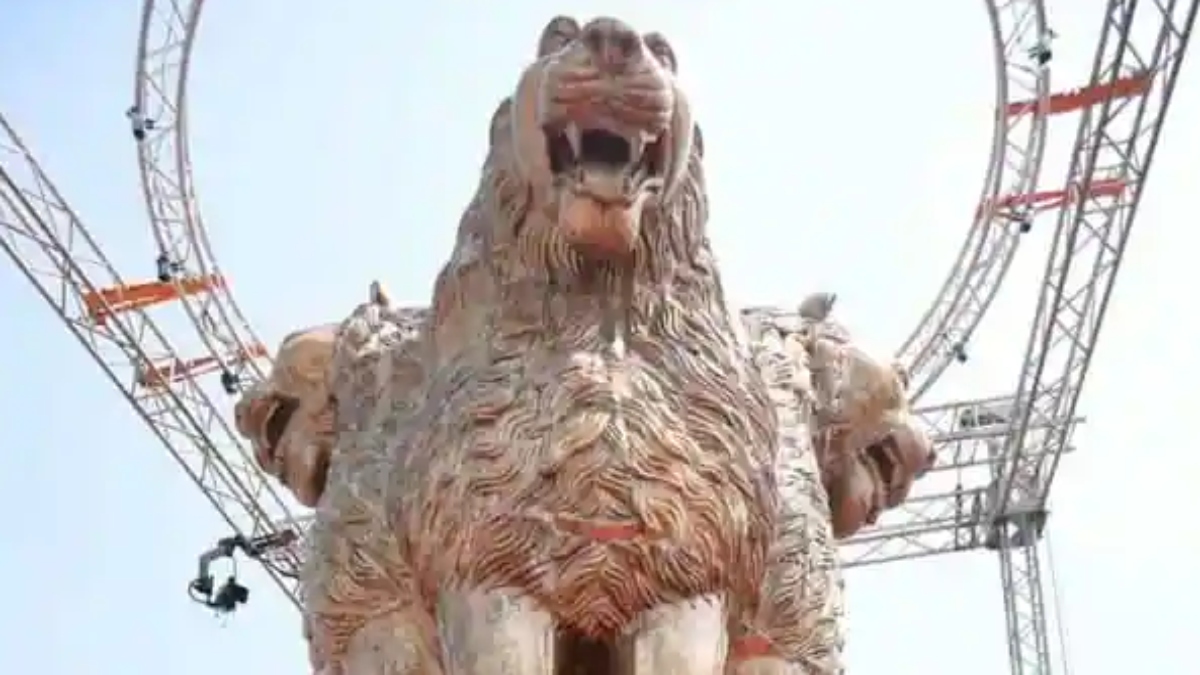 A day after Prime Minister Narendra Modi unveiled the national emblem atop the new Parliament building, opposition parties on Tuesday accused the BJP government of distorting the emblem and demanded immediate course correction.

Slamming the distortion of the emblem, Leader of the Congress in the Lok Sabha Adhir Ranjan Chowdhury tweeted on Tuesday, “Narendra Modi Ji, please observe the face of the Lion, whether it is representing the statue of Great Sarnath or a distorted version of GIR lion. Please check it and if it needs, mend the same.” Referring to the sharp criticism the new emblem drew from activists and politicians a day after it was unveiled by PM Modi on Monday, Chowdhury said in another tweet that the unveiling event held on Monday had “already drawn a flurry of questions including constitutional propriety, let alone democratic values”.

His party colleague and AICC General Secretary Jairam Ramesh tweeted, “To completely change the character and nature of the lions on Ashoka’s pillar at Sarnath is nothing but a brazen insult to India’s National Symbol!”

The Trinamool Congress (TMC) called the newly unveiled emblem “an insult to the national symbol”. Taking to Twitter, TMC Rajya Sabha member Jawahar Sircar shared two different images, juxtaposing the original Sarnath lions with the new emblem, and termed the latter as “snarling, unnecessarily aggressive and disproportionate”. Thus Twitted Sircar, “Insult to our national symbol, the majestic Ashokan Lions. Original is on the left, graceful, regally confident. The one on the right is Modi’s version, put above the new Parliament building – snarling, unnecessarily aggressive and disproportionate. Shame! Change it immediately.”

However, the most damning criticism came from the Rashtriya Janata Dal (RJD). “The original artefact is an epitome of grace and the replica of the original version is expressive of the man-eating tendency of devouring human beings, their forefathers and the whole country. Every emblem shows the inner tendencies of human beings. Through these symbols, the man shows the commoners what his real character is,” said the RJD on party’s official Twitter handle.

The prime minister had on Monday unveiled the national emblem atop the central foyer of the new Parliament building. The new emblem is made of bronze, weighs 9,500 kg, and is 6.5 m in height. It is supported by a steel structure weighing around 6,500 kg.

However, a day after the unveiling of the new emblem, a roaring controversy erupted over how the lions in the emblem look.

Noted historian Professor Irfan Habib also termed it as an unnecessary meddling with the national symbol. “Meddling with our national emblem was totally unnecessary and avoidable. Why should our lions look ferocious and full of angst? These are Ashoka’s lions adapted by independent India in 1950,” tweeted the Professor Emeritus.

Defending his government over the issue, Union Housing and Urban Affairs Minister Hardeep Singh Puri said in a tweet, “Sense of proportion & perspective. Beauty is famously regarded as lying in the eyes of the beholder. So is the case with calm & anger. The original #Sarnath #Emblem is 1.6 mtr high whereas the emblem on the top of the #NewParliamentBuilding is huge at 6.5 mtrs height.”

In the meanwhile, BR Mani, former ADG of Archaeological Survey of India (ASI), said that the original pillar was 7–8 feet, while the national emblem above the Parliament House is almost three times high. “Asoka pillar excavated in 1905 has been copied to be installed above Parliament House. I will not call claims of opposition leaders baseless or meaningless but it is not right to make political commentary on it,” Mani said.

The former ADG of ASI further said that he believed that what has been made was a good copy of the Sarnath lions of Asoka.

Wickremesinghe to be sworn in as interim President of Sri Lanka