OMAR, MEHBOOBA CLAIM THAT THEY HAVE BEEN PUT UNDER HOUSE ARREST - The Daily Guardian 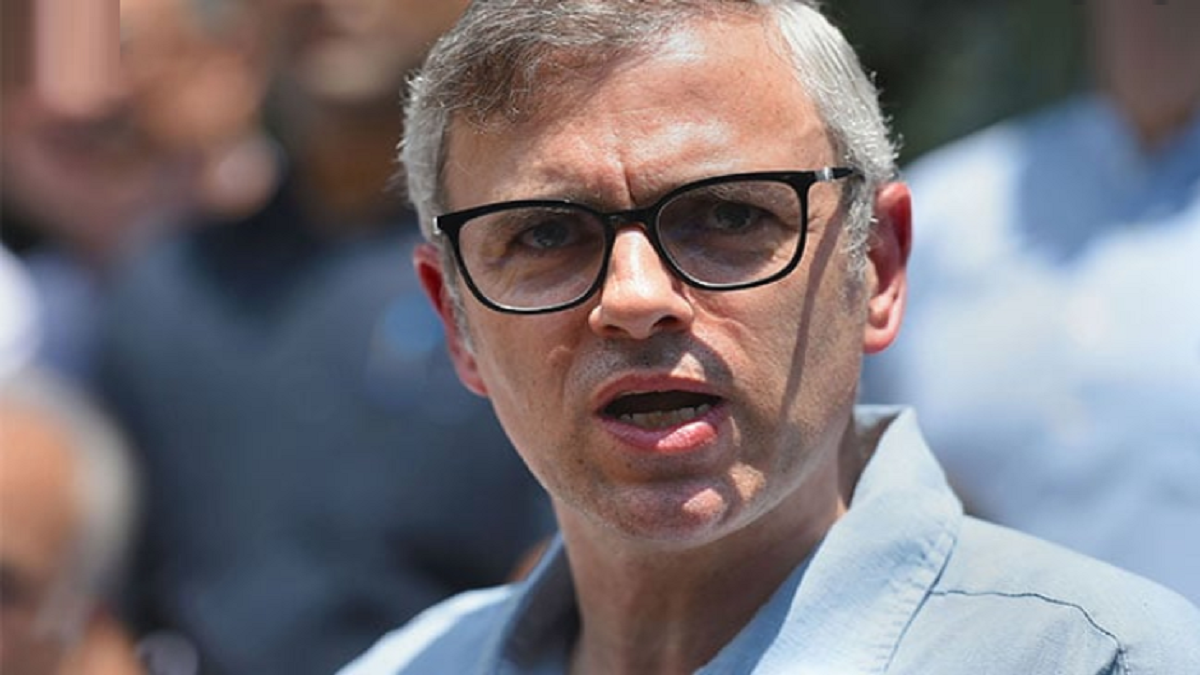 Former Chief Minister and vice president of National Conference took to Twitter on Sunday claiming that he along with his father who is sitting MP from Srinagar has been disallowed to move out by police. Omar in his tweets also uploaded pictures of police vehicles put outside his gate at Gupkar Road Srinagar.

Taking a jibe at BJP, he said that this is the “‘Naya Kashmir” with new norms on the ground. In his tweet, he said, “This is the ‘Naya/new J&K’ after Aug 2019. We get locked up in our homes with no explanation. It’s bad enough they’ve locked my father (a sitting MP) & me in our home, they’ve locked my sister & her kids in their home as well”.

Reacting to his tweets J&K police said that due to the adverse inputs on the ground all the VIP movement was discouraged and added that they were pre-informed about such move. J&K administration has not responded to the tweets of both Omar Abdullah and Mehbooba Mufti.

“Today is 2nd Anniversary of dreaded Lethpora terror incident. There shall be no ROP on the ground. Due to adverse inputs, movement of VIPs/Protected persons has been discouraged and all concerned were informed in advance not to plan a tour today (sic),” the Srinagar Police tweeted.

Omar claimed that even his sister and her kids were detained in their house and his home staff were not allowed to move in by police. In another tweet he said, “Chalo, your new model of democracy means that we are kept in our homes without explanation but on top of that the staff that works in the house aren’t being allowed in and then you are surprised that I’m still angry & bitter”.

Mehbooba Mufti was detained on Saturday at her Gupkar residence as she uploaded a video talking to policemen stationed outside her gate why she was stooped to move out. Mehbooba said that she was scheduled to visit the family of Athar Mushtaq who was killed in the alleged fake Srinagar encounter and recently his father Mushtaq Ahmad was booked under UAPA for holding a protest in his native village of Pulwama to get back the dead body of his son for a decent burial.

“Placed under house arrest as usual for trying to visit the family of Athar Mushtaq killed allegedly in a fake encounter. His father was booked under UAPA for demanding his dead body. This is the normalcy GOI wants to showcase to the EU delegation visiting Kashmir”, Mehbooba said in her tweet.

After the encounter police refused to give the bodies to families as it is now a norm that these local militants are buried by police in Sonmarg hills in order to avoid any law and order problem. 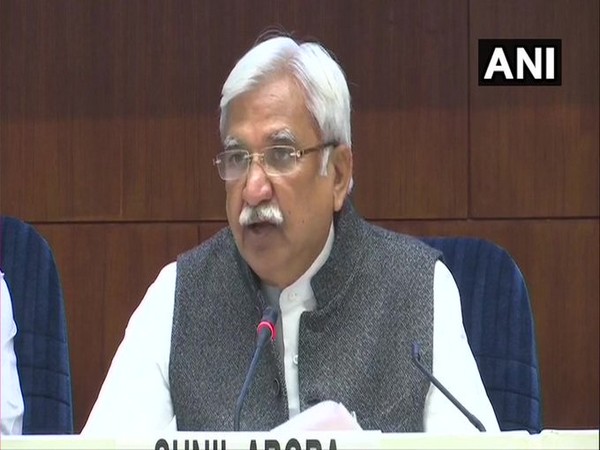 New Delhi [India], February 26 (ANI): As many as 824 assembly constituencies shall be going for polls in four states- Kerala, Tamil Nadu, West Bengal, Assam and Puducherry (Union Territory), said Chief Election Commissioner of India Sunil Arora on Friday.
Tamil Nadu assembly elections to be held in a single phase on April 6, Kerala also goes to polls on April 6; Assam assembly elections to be held in 3 phases- 1st phase of polling- March 27, second phase polling- April 1 and third phase of polling- April 6; Puducherry elections to be held on 6th April.
Counting of all votes will be held on May 2.
“Nearly 18.68 crore electors will vote at 2.7 lakh polling stations for 824 seats in four assembly elections,” Sunil Arora said addressing media persons here today.
He also said the Bihar Assembly polls last year in November amid the COVID-19 pandemic was a watershed moment and proved to be a litmus test for the Election Commission of India (ECI).
Addressing mediapersons Arora said, “In the thick of the pandemic, ECI started test trials with elections of 18 seats to Rajya Sabha. After that, came the challenge of the Bihar elections, it was indeed a watershed moment for ECI. It proved to be a litmus test. Voting turnout was 57.34 per cent exceeding the 2015 Assembly polls and 2019 Lok Sabha polls in the state.”
He applauded the frontline workers, healthcare workers and ECI officials for performing election duty during the COVID times last year.
All poll officials will be vaccinated against Covid-19 before elections,” Arora said
“Our tributes to the COVID warriors, doctors, paramedics, nurses, researchers, scientists and all our officials on election duty who are located on the frontline,” said Arora.
Emphasising on security issues, Arora said, “Adequate CAPFs deployment shall be ensured during elections. All critical, vulnerable polling stations have been identified and an adequate number of CAPFs will be deployed.”
“A total of 824 assembly constituencies shall be going for polls during these elections. 18.68 crore electors will cast vote at 2.7 lakh polling stations in Tamil Nadu, West Bengal, Kerala, Assam and Puducherry,” added Arora.
He also announced guidelines for the upcoming elections.
These include– door-to-door campaigning to be restricted to five persons including the candidate, Polling officials to be vaccinated, separate norms for suspected COVID-19 patients.
The terms of the legislative assemblies of five states — West Bengal, Tamil Nadu, Assam, Kerala and Puducherry — will come to an end either in May or in June this year.
Elections for the Legislative Assembly of West Bengal that comprises 294 seats will be held soon as the current tenure ends on May 30. (ANI)

‘Majboot PM’ ensures that if he promises 100 paise to people, it reaches them: Rajnath Singh 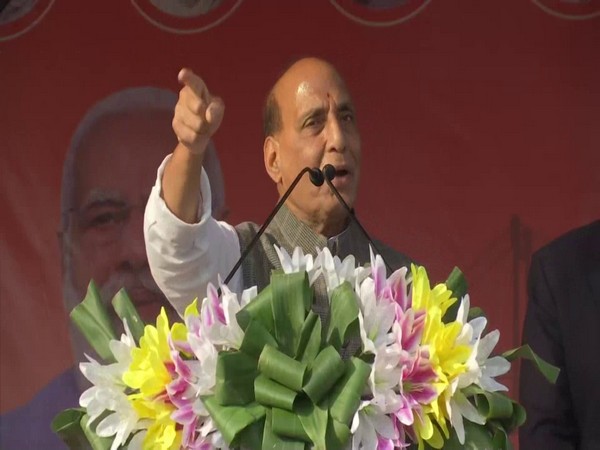 Dakshin Dinajpur (West Bengal) [India], February 26 (ANI): Raising doubts about the implementation of the Pradhan Mantri Jan-Dhan Yojana (PMJDY) in West Bengal under Chief Minister Mamata Banerjee, Defence Minister Rajnath Singh said that he does not know whether “Didi allowed the opening of Jan Dhan accounts”, but the ‘Majboot PM’ Narendra Modi makes sure that if people are promised 100 paise under the scheme, then the said amount reaches them.
“I don’t know if Didi allowed the opening of Jan Dhan accounts in West Bengal but when the scheme was brought, our former PM Rajiv Gandhi said out of 100 paise sent, people got 14 paise. Modi Ji said he’s not ‘majboor PM’ but ‘majboot PM’, and made sure 100 paisa reaches people,” said Union Minister Rajnath Singh while addressing a public rally in Balurghat of the poll-bound West Bengal.
He targeted the ruling Trinamool Congress (TMC) for giving more importance to politics above people and not implementing the Central government’s schemes in West Bengal.
The Union Minister also assured the people that if the BJP comes to power in the state, then the party shall not run the government on the basis of caste and religion and follow the principle “Justice to all, appeasement of none”.
“We’ll not run govt on basis of caste and religion but on basis of justice and humanity. ‘Justice to all, appeasement of none’ will be our principle. TMC has put politics above people. It’s the reason they don’t allow the implementation of Centre’s schemes in State,” remarked Singh.
The minister stated that large gatherings of people at BJP rallies in West Bengal indicate that they want to get rid of Mamata Banerjee and bring the BJP.
“People are gathering in huge numbers at our rallies in West Bengal. It shows that people of State have made up their minds to oust Mamata didi and bring BJP,” he added. (ANI) 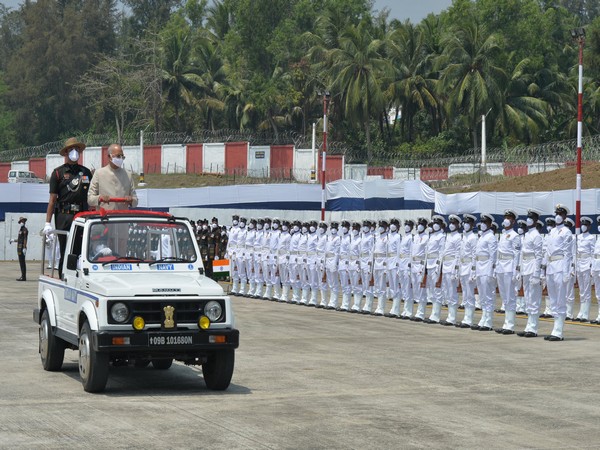 New Delhi [India], February 26 (ANI): President Ram Nath Kovind accorded a guard of honour on his arrival at Port Blair on Friday.
The Rashtrapati Bhavan informed that President Kovind is visiting the Union Territory of Andaman and Nicobar Islands for the first time as the President of India. He is expected to stay there for a period of 4 days.
“The President of India, Ram Nath Kovind, will visit Andaman and Nicobar Islands from February 26 to March 1, 2021,” read the press release by the President’s Secretariat. (ANI) 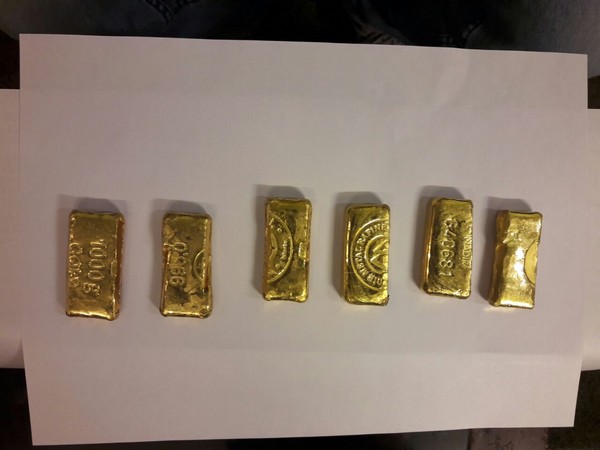 New Delhi [India]. February 26 (ANI): Delhi airport customs on Friday seized 1.5 kg gold in the form of paste worth Rs 65.44 lakh from the toilet of an aircraft and arrested one passenger in this connection.
The Delhi Airport Customs conducted the search after a special input.
“Based on specific input Delhi Airport Customs recovered 1.5kg gold valued at Rs 65.44 lakhs concealed as chemical paste in the toilet of aircraft of 6E022 that arrived from Dubai on 24/2/21. One passenger arrested under section 104 of the Customs Act. Further investigation is going on,” said Delhi Customs.
The accused had come to India from Dubai. The matter is being investigated further. (ANI)

Violence has defined the tenure of Mamata Banerjee: Smriti Irani 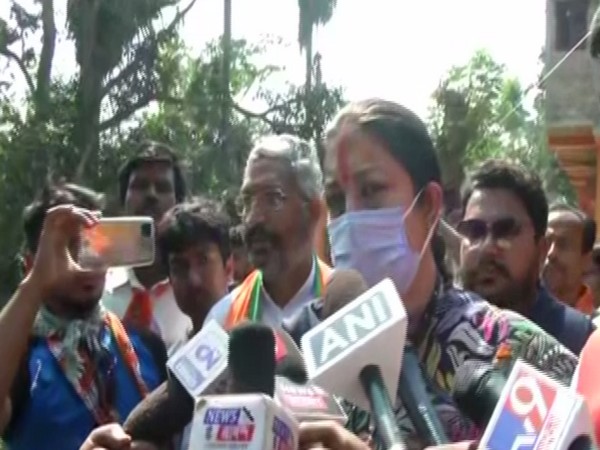 By Joymala Bagchi
Kolkata (West Bengal) [India], February 26 (ANI): Union Minister and Bharatiya Janata Party (BJP) leader Smriti Irani on Friday said that violence has defined the tenure of the Mamata Banerjee-led Trinamool Congress government in West Bengal.
Irani, during her visit to the poll-bound state, said, “Violence has defined the tenure of Mamata Banerjee. Democratic voices across Bengal have decided that they will make sure that TMC this time loses the assembly elections.”
She further stated, “We are grateful that the people of Bengal are coming out in large numbers to support us either in the Yatras or programs that are being conducted by our senior leadership. This indicates that this time in West Bengal the lotus will bloom.”
Violence was reported in Kolkata on February 24 when a clash broke out between Trinamool Congress and Bharatiya Janata Party when BJP’s Parivartan Yatra reached Amherst Street.
“Mamata Banerjee has nothing to say about development. The BJP has taken an oath to lead West Bengal towards development,” Irani remarked.
Irani started her roadshow from police para, Dhalai Bridge, Pachpota, in South 24 Parganas on a campaign vehicle. However, after a short while, she got down and rode a scooter.
The fight to power is getting intense in Bengal especially between TMC, BJP and Left-Congress alliance with each party trying to reach the masses, highlighting each other’s failures and projecting an assurance.
West Bengal is gearing up for the upcoming assembly elections for 294 seats this year. The tenure of the current govt in the state is coming to an end on May 30. (ANI)

Mumbai (Maharashtra) [India], February 26 (ANI): Reliance Industries on Friday thanked Mumbai Police for the prompt action it took after explosive materials were found in a vehicle outside group chairman Mukesh Ambani’s residence on Thursday.
“We are thankful to the Mumbai Police for their quick and immediate action. We are confident that the Mumbai Police will complete a thorough investigation quickly,” the Reliance Industries Limited spokesperson told mediapersons.
“Some amount of Gelatin was found in the vehicle. The vehicle was seized by the police. The offence has been registered under relevant sections of the IPC and Explosive Substances Act. A letter was found in the vehicle. As the investigation is in the preliminary stage, we cannot share contents now,” the Mumbai Police PRO told ANI.
According to sources, the handwritten “threat letter” in “broken English” was addressed to Mukesh Ambani and his wife Neeta Ambani.
The suspect who parked the car (near Mukesh Ambani’s house yesterday) was seen in CCTV footage but has not been identified as he was wearing a face mask and his head was covered with a hoodie, said Mumbai Police.
Mumbai Police has deployed its personnel outside Ambani’s house after explosive materials were found near his residence on Thursday.
A car carrying unassembled explosive materials was found abandoned at Carmichael Road in South Mumbai on Thursday evening, near the house of Reliance Industries chairman Mukesh Ambani.
The bomb squad and police teams are conducting a probe.
According to the Mumbai Police, a Bomb Detection and Disposal Squad (BDDS) examined the vehicle and found gelatin, a substance often used to make explosives. (ANI)