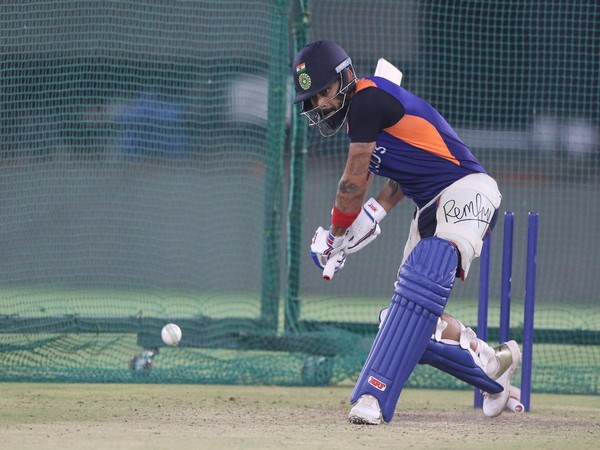 Ahmedabad (Gujarat) [India], March 11 (ANI): Ahead of the T20I series opener against England, India skipper Virat Kohli on Thursday said his “mission” remains the same despite the change in format.
Taking to Twitter Kohli shared some pictures from the training session and captioned the post, “New week, new format, same mission. Let’s get it.” 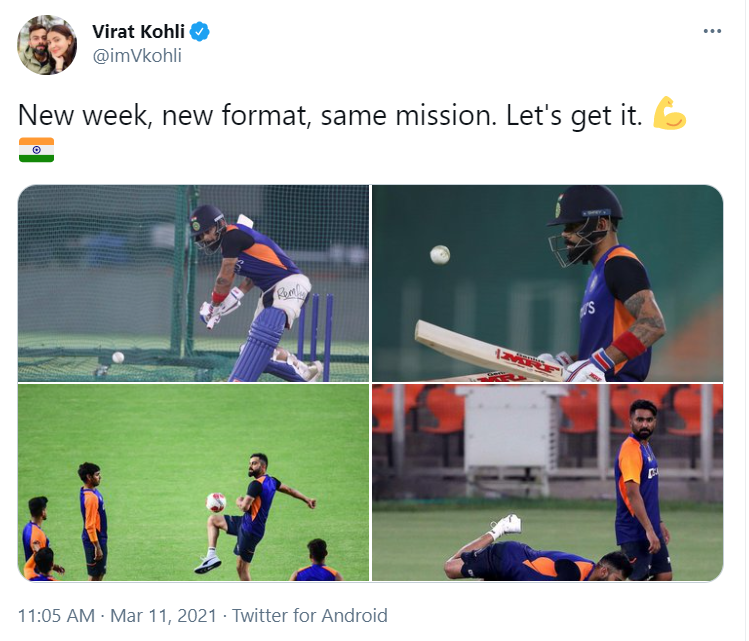 India are high on morale after clinching the four-match Test series 3-1 and making into the World Test Championship (WTC) final against New Zealand.
India and England will face off in five T20Is, beginning Friday and this series will give every squad member an opportunity to show their metal against the Three Lions.
The Men in Blue have some newbies in their squad and all of them have high potential to start firing from game number one. The likes of Suryakumar Yadav, Rahul Tewatia, and Ishan Kishan have impressed in the Indian Premier League (IPL) and it has finally seen them being rewarded with a place in the Indian lineup. Who between Suryakumar and Shreyas Iyer play at the number four will be an interesting watch as one would ideally think that the team management will back senior Shreyas going into the series opener.
Both Suryakumar and Ishan have the capability of striking from ball one, but Iyer’s experience and that might work in his favour as India have a power-hitting middle-order with Rishabh Pant and Hardik Pandya to come in.
Rohit Sharma and Kohli would be batting at number one and three, and it only needs to be seen whether India sticks with KL Rahul or they try out Shikhar Dhawan in the first few T20Is.
Batting coach Vikram Rathour has already said that the team plans to know their best XI by the end of this England series, so it can be expected that Kohli would field the XI which he thinks would be best for the T20 World Cup.
Jasprit Bumrah and Mohammed Shami have been rested for this series and right now Natarajan’s participation in the series looks doubtful. The hosts have a problem of plenty to pick and choose from the likes of Deepak Chahar, Shardul Thakur, and the returning Bhuvneshwar Kumar.
Bhuvneshwar who is a yorker specialist at the backend might just get a nod because of his skills which have paid dividends for his IPL franchise SunRisers Hyderabad. Yuzvendra Chahal is a sure shot starter, it just needs to be seen who is given the nod as the second spinner between Axar Patel, Rahul Tewatia, and Washington Sundar. (ANI)