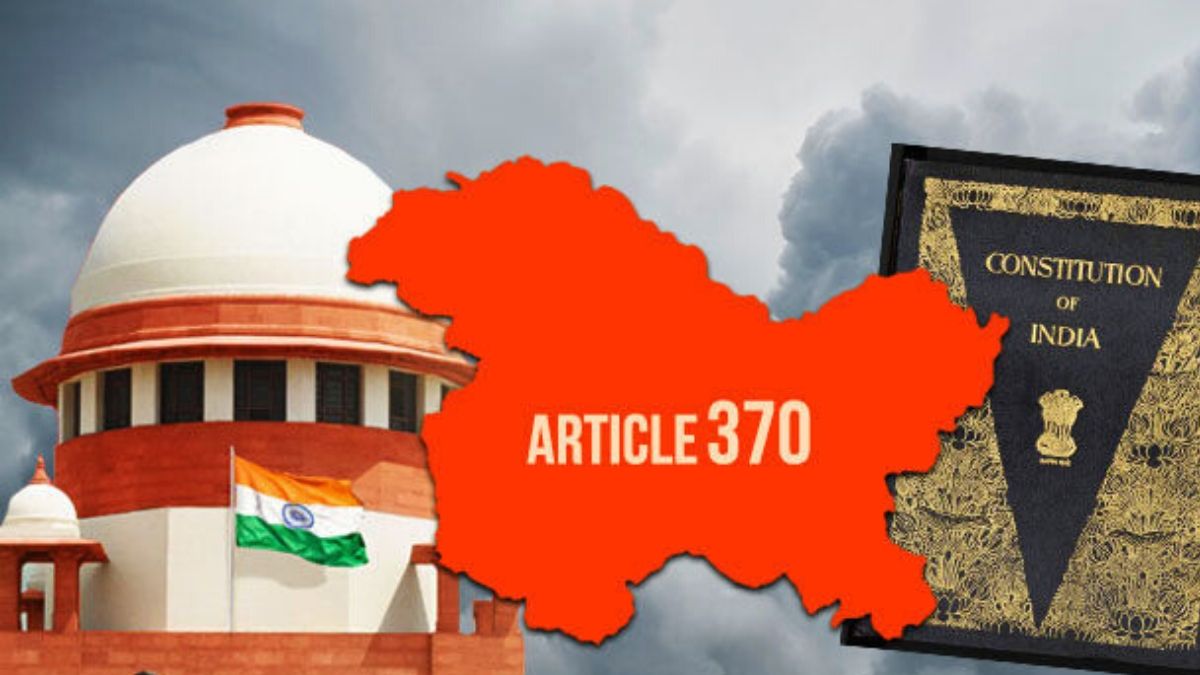 However, the danger of a de facto Muslim state surviving under the pretext of tactical contingencies looms large. Neutralisation of Article 370 and reorganisation of Jammu and Kashmir into two Union Territories have been fundamentally decolonising acts accomplished by the Modi government.

Running Jammu and Kashmir as a constitutionally protected Muslim sphere of influence never accomplished the defeat of two nation of theory. It, in fact, nourished it and ensured continuation of Pakistan movement on the territory of India. Article 370 was a colonial albatross hanging round the neck of India. The phenomenal changes in Jammu and Kashmir have proven the alarmists wrong. Those who predicted Jammu and Kashmir will fall apart and violence will spiral out of control must be dumbfounded by the turn of events.

Bureaucrats handling the situation on the ground must be no less surprised. The Governor of the erstwhile state of Jammu and Kashmir Satpal Malik has recently revealed that the Chief Secretary of the state had opined that around 1,000 people might lose life after the removal of Article 370. Nothing of that sort happened. Rebellious street mobilisations and civil unrest did not happen.

The civilian contingents that would often move in to disrupt anti-terror operations in areas with heavy presence of security personnel disappeared. Terrorist violence steeply went down. How did it happen? We cannot deny the administration at the helms the credit for managing a potentially explosive situation with deftness. We can also look for other reasons for the separatist paralysis.

One reason can be tactical retreat by the separatist establishment after coming face to face with the inability of Pakistan to escalate the situation, adverse international situation and a determined government to take them on. This can explain the steep fall in terrorist violence but not the absence of civil unrest and anti-India mobilisations. The series of responses which Government of India deployed on the ground consisted of one extraordinary measure never deployed before — putting almost the entire local political leadership of Kashmir under detention.

Not only was the leadership of Hurriyat incarcerated but also the top leadership of the two regional political parties — National Conference and Peoples Democratic Party — and many others put under arrest. It is this measure that certainly proved to be a reason for the civil unrest not taking off. There is no dearth of evidence to show that the political mainstream in Kashmir has been actually performing as the overground of separatism.

Rendering the symbiotic knot between the Islamic fundamentalist separatism and the political mainstream dysfunctional acted as a force multiplier. Knocking off the overground crippled the underground. This stark reality that the political mainstream tomtommed as the democratic secular face of India in Jammu and Kashmir acted as the separatist overground for decades has to be recognised and internalised. Otherwise the new phenomenal changes in Jammu and Kashmir will fail in bringing peace and prosperity.

And this is the most difficult challenge because governance in Jammu and Kashmir has been, over the years, essentially designed to be halfway separatist in content. Indian state deployed halfway-separatism as a tactical-strategic device with the misplaced belief that in a Muslim-majority Jammu and Kashmir it will help in neutralising the separatist psyche and appeal for Pakistan.

That nationalism will come through the separatist route and secularism will grow by empowerment of Muslim communal identity politics has been a strategic perversion that has afflicted the policymaking on Jammu and Kashmir. Pakistan and pan-Islamic fundamentalist regimes have used halfway separatist governance as a subversive space over the years. Article 370 along with halfway separatist governance in Jammu and Kashmir has been a cardinal expression of the Nehruvian vision of handling the only Muslim-majority state of India.

This vision transformed Jammu and Kashmir into a springboard for Pakistan’s nefarious designs. The most critical follow up after the annulling of Article 370 is to dispense away with halfway separatist governance lock, stock and barrel. The new order in Jammu and Kashmir cannot survive and grow on the soil of the old order. The new order has to be given a fresh ground to sprout. It is in this area the governments in the Union Territory of Jammu and Kashmir and in the Centre seem to be faltering.

The bureaucrats that practised halfway separatism as a strategic imperative seem to be particularly out of place in the new changed situation. They are still holding on to the formulations of the previous order as a matter of habit as well as intellectual unwillingness to recognise that halfway separatism all along acted as a subversive space rather than an anti-separatist device.

Government of India has dealt with firmness many critical situations in the erstwhile state of Jammu and Kashmir in the past. Unfortunately follow up of crisis management was invariably mishandled more often than not. Sheikh Abdullah was arrested in 1953 to thwart an imperialist conspiracy. The new Prime Minister of Jammu and Kashmir Bakshi Ghulam Mohammad had to secretly threaten Government of India with his resignation when he came to know that parleys were being started with Sheikh Abdullah.

The new government in the state had not even settled in and the move to talk to Sheikh was sending very weak signals. The threat of “independent Jammu and Kashmir” by Sheikh Abdullah had clearly brought to the fore that the NC was claiming a separate national identity for Jammu and Kashmir on the basis of Muslim-majority character of its population. The eminent scholar of Jammu and Kashmir’s political and constitutional history, M.K. Teng, succinctly states that the NC claim was “in no way different from the ideological content of the Muslim movement for Pakistan”.

The Muslims of Jammu and Kashmir as per this outlook were “a separate nation and therefore could not form a part of the secular polity of India, in which the state would not be committed to the precedence of Islam and the Muslim majority of its population”. After Sheikh’s volte face, why did Government of India not abandon the belief that Muslimisation of the state did not conflict with Indian secularism. Why is Government of India still clinging to the same old belief? The defeat of Pakistan in 1971 war didn’t bring a lasting victory because Government of India continued to nourish Jammu and Kashmir as a Muslim state.

A protracted process of self-defeat started at Simla Conference immediately after the war and reached its completion when Sheikh Abdullah was brought back as a victorious Caesar in 1975 and state of Jammu and Kashmir handed over to him. The wrong premise that mere democratic empowerment could neutralise commitment to communal separatism formed the basis of this move. The politics of drift away from India started as soon as Sheikh assumed the reigns of the state.

We might see one more cycle of self-initiated defeat after the epochal acts of taking Article 370 out of equation and reorganising the state of Jammu and Kashmir into two Union Territories if fundamental corrections are not made in the policy structure on Jammu and Kashmir. Deciding to conduct the new delimitation in Jammu and Kashmir on the basis of 2011 Census may constitute the beginning of this new cycle of self-defeat. 1991 Census operations were not conducted in Jammu and Kashmir because of bad internal security situation. Situation in 2001 and 2011 was no different. It had in fact deteriorated.

Pan-Islamism had entered into the political arena in a big way. Vaid Vishnudutt Sharma, top leader of BJP in Jammu and Kashmir, tried to apprise the then Union Home Minister of the ruling NDA of the dangers of conducting Census operations in the state in 2001 through a subverted and crippled administrative apparatus. A halfway separatist government was at the helms in the state led by a political leadership which was on a prowl to wreck the status quo from within.

His concern was not heeded to. What happened in 2001 and 2011 Census operations can be summed up as: The number of voters in Jammu was 1.41 lakh more than Kashmir around 2001; Kashmir’s population was shown to have increased by 14,11,000 in 10 years from 2001 to 2011; average population growth of Jammu province was 31% between 1971 and 2001, it dropped to 21% in 2011. Only something catastrophic or extremely subversive must have happened to explain this. The decision to declare the new delimitation in the Union Territory of Jammu and Kashmir based on 2011 census figures is certainly guided by the same mindset which for decades clung tenaciously to the use Muslimisation as a prescription for addressing Muslim alienation.

The issue of sharp spurt of population in Kashmir province at a time when it should have actually gone down owing to almost total religious cleansing of Hindus from there is not an ordinary issue. The apprehensions that the steep percentage fall in Jammu happened through a process of a manipulated census cannot be dismissed. If manipulation and fudging is established, then using of Census as a lethal instrument to create legislative hegemony and impetus for demographic expansion will stare us in the face.

Its implications go beyond creation and perpetuation of a particular type of hegemony. It represents a form of a subversive war in which democratic space is used to destroy democracy. The success of whatever will be done in Jammu and Kashmir after introduction of the phenomenal changes will be primarily decided by two realities. One, will the non-Muslims particularly the Hindus of Jammu and Kashmir continue to be expendable or they get their freedom as equal citizens of India free from the servitude of Muslim precedence?

If Government of India recognises the genocide inflicted on Hindus of Kashmir and addresses their return and rehabilitation in the context of permanent reversal of their genocide, and if measures are initiated to liberate Hindus of Jammu from a demeaning and debilitating Muslim hegemony, then the new changes in Jammu and Kashmir will bring forth a future of prosperity, promise and peace. Second, will Government of India abandon halfway separatist approach to deal with Muslims in Jammu and Kashmir?

If it does, then those Muslims who want to live with India in unfettered freedom on the principle of equality will be also liberated. All through since the days of accession of Jammu and Kashmir with India such Muslims have remained equally expendable for the state of India.