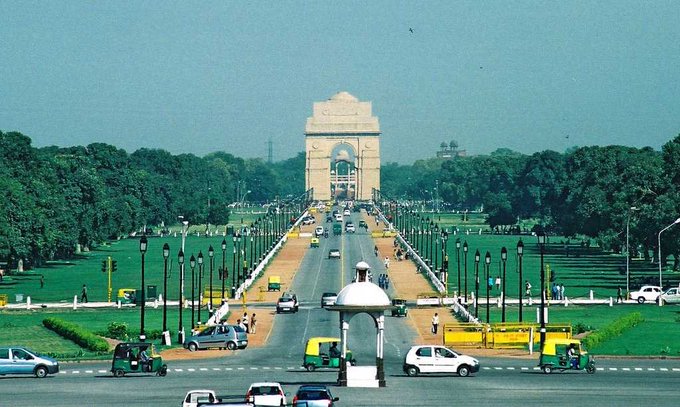 New Delhi Municipal Council (NDMC) passed a resolution to change the name of ‘Rajpath’ to ‘Kartavya Path’ on Wednesday.

While addressing a press conference Union Minister Meenakshi Lekhi said, “Today’s meeting was a special meeting for NDMC and the resolution was passed to change the name of Rajpath to Kartavya Path. The history of this region is that this entire region was constructed by the imperial powers and post independent which is called Janpath today was called Queen’s way in earlier times and it got changed to Janpath but the Rajpath was called King’s way and continues to remain as Rajpath. Now post-independence we chose the system of democracy. The idea of democracy is not to rule over others but the idea is to a participatory nature and people need to be bound by the duties.”

“We carried forward colonial mindset after Independence. Rajpath conveys you have come for ‘Raj’. PM said that country is celebrating Azadi ka Amrit Mahotsav and we have to end imperialistic policies, and symbols. So, the name of Rajpath has been changed to Kartavya Path,” Lekhi added.

Earlier Rajnath was known as Kingsway where every year Republic Day is celebrated.

Meanwhile, on the occasion of Independence Day Prime Minister Narendra Modi had given a ‘panch pran’ (five vows) call to citizens during ‘Azadi Ka AmritKaal’ and one of the resolves was “duty of the citizens”.

“You have to concentrate on your resolve and strength. And we must take up the responsibility of fulfilling all the dreams of the freedom fighters by embracing those ‘Panch Pran’ by 2047 when the country celebrates 100 years of independence,” PM Modi said.

“The second pran (pledge) is that in no part of our existence, not even in the deepest corners of our mind or habits should there be any ounce of slavery. The third pran (pledge) is that we should feel proud of our heritage and legacy. The fourth pran, which is equally important, is unity and solidarity. The fifth pledge is the duty of the citizens, in which even the Prime Minister, and Chief Minister cannot be excluded as they are also responsible citizens and have a duty towards the nation. This virtue is going to be the vital life force if we want to achieve the dreams we have for the next 25 years,” PM Modi said.

Moreover, PM Modi also talked about the fifth resolution and said every individual should have success in life.

“While trying to understand all the countries in the world that have made progress; every country that has achieved something, even in personal life, few things emerged. One is a disciplined life, and the other is devotion to duty. There should be a success in the life of the individual, of the society, of the family, of the nation. This is the fundamental path and the fundamental vital force,” PM Modi said.

“It is the job of the government to make efforts to provide 24 hours electricity but it is the duty of the citizen to save as many units as he can. It is the responsibility and efforts of the government to supply water to every field, but a voice should come from each of my fields that we will move forward by saving water by focusing on ‘per drop more crop’,” Prime Minister Modi added.

The reason behind Barack Obama’s return to the White House