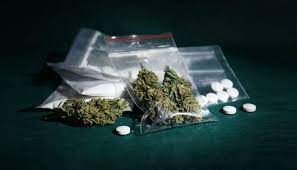 A joint team of Assam Rifles and Excise & Narcotics Department, seized a large amount of drugs worth 1.18 crore in Aizwal, a district in Mizoram. In the incident, the officials held four people.
The statement further stated that the 18 soap packs (236 grammes) of heroin worth Rs. 1.18 crore and a car were found in the Falkland neighbourhood of World Bank Road, Aizawl, by the Aizawl Battalion of 23 Sector Assam Rifles.
According to the statement, the operation was carried out by a joint team from the Assam Rifles and the Excise & Narcotics Department, Aizawl, based on specific intelligence.
The found heroin is estimated to have cost Rs 1.18 crore, and the confiscated goods, vehicle, and detained individuals were given to the Excise & Narcotics Department in Aizawl for further legal action.
For the state of Mizoram, the continued smuggling of illegal substances is a serious source of concern. The Northeast Sentinels, as the Assam Rifles are appropriately known, have successfully launched such operations against smuggling activities.
On November 11, 2022, the Mizoram police’s Criminal Investigation Department (CID) detained two people in Aizawl and confiscated a sizable amount of the recreational drug methamphetamine, valued at Rs 58 crore. According to police, a squad from CID (SB) seized 2 lakh methamphetamine tablets, totaling 19.223 kg, from a vehicle in the Luangmual neighbourhood of Aizawl after acting on a specific intelligence tip from a sister agency.
In a similar incident on November 22, 2022, the local police in Aizwal received information about the drugs by some unknown people on the roadside near the Mizoram University road. After thorough search in the area, the police recovered a big sack containing 22 black polythene parcels which were kept in the bushes.