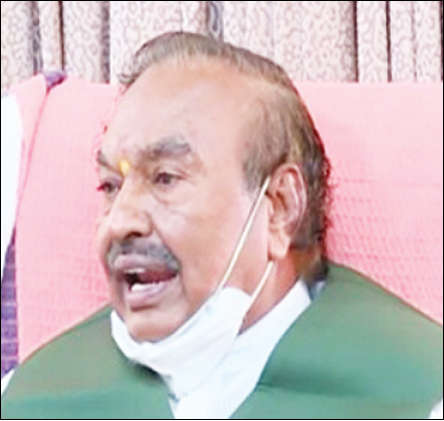 Karnataka BJP MLA KS Eshwarappa filed a complaint to the police after receiving a threat letter saying that his tongue will be cut if he calls Tipu sultan “Muslim Goonda” once again.

The message was reportedly sent to his residence. A heated row erupted in Karnataka after the Independence Day banners in the state featured Tipu Sultan and Hindutva icon V D Savarkar.

Eshwarappa said that he has never called all Muslims ‘Goondas’, and he’s not scared of such threats.

Talking to reporters on Tuesday, the Congress leader had said, “Eshwarappa keeps making accusations about the Congress. BJP will make a mistake and put the blame on Congress.”

A curfew has been imposed under Section 144 in parts of the Shivamogga district after a group of Tipu Sultan followers allegedly attempted to remove a poster of RSS leader Veer Savarkar installed at Ameer Ahmed circle on the occasion of Independence Day. Later, two groups from different communities clashed.

On August 16, the Bangalore Metro Rail Corporation Limited (BMRCL) entered into controversy by putting on display a painting of VD Savarkar at the Kempegowda Metro Station in Majestic.

The painting, hung next to the stairs of the west entrance of the station, has Chandrashekhar Azad and Udham Singh in the foreground with Savarkar on the top left corner. It had gone unnoticed for days. However, as the row over Savarakar led to violence in Shivamogga, a passenger questioned the decision to celebrate a controversial person who allegedly evoked outrage.