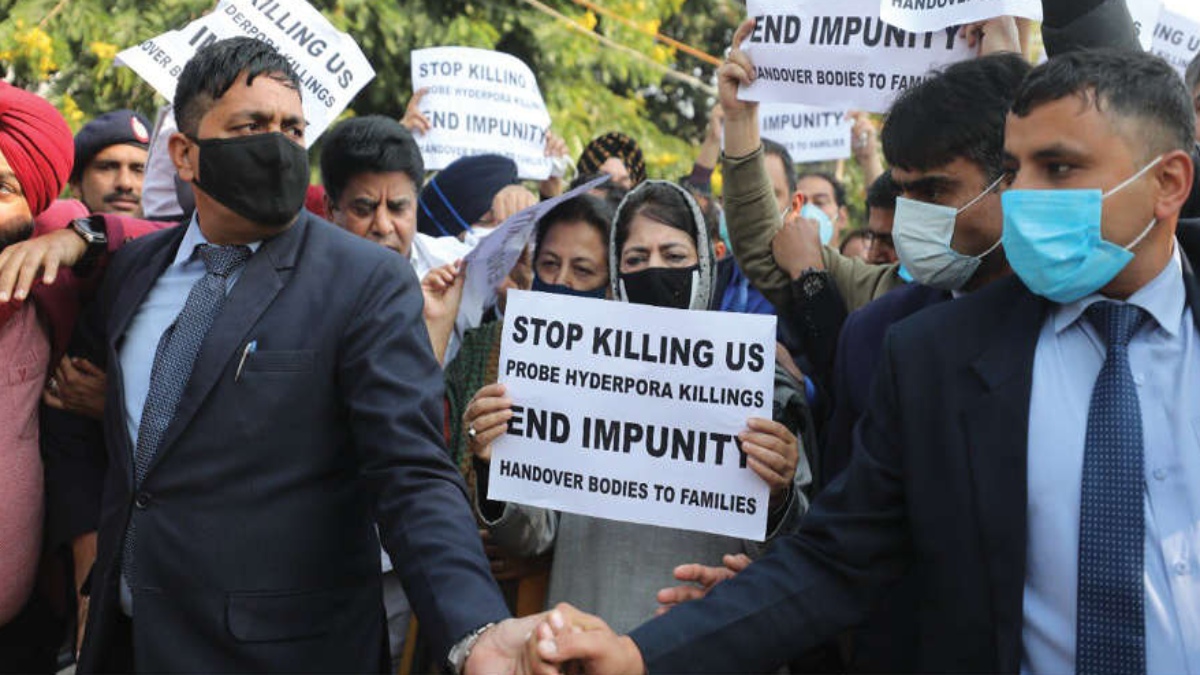 Peoples Democratic Party (PDP) chief Mehbooba Mufti along with other party leaders held a protest in Jammu on Wednesday against the alleged killing of civilians in Hyderpora encounter.

The demonstration was held outside the PDP office. She claimed that three civilians have been killed in the encounter that took place on Monday. “I am protesting because this government kills civilians in the name of militancy. Nobody knows if militants are being killed. Three civilians have been killed recently. The government refuses to hand over their dead bodies to the families despite the latter’s demand,” Mufti told mediapersons.

On Tuesday, the PDP chief demanded a judicial inquiry into the Hyderpora encounter in Jammu and Kashmir.

“It is unfortunate that three civilians were killed in the (Hyderpora) encounter. It has become a fashion to brand civilians killed in encounters as OGWs. They have no proof to show that they were Over Ground Workers (OGWs). Such incidents cause more anger among people against us. We want a judicial inquiry into this incident. Strict punishment should be given to the guilty,” she had said.

An encounter between security forces and terrorists had broken out in the Hyderpora area of Srinagar in Jammu and Kashmir on November 15 after input was received by police regarding the presence of terrorists in an illegal call centre in a private building in the area.

In an official statement, the Jammu and Kashmir Police said that two terrorists identified as Haider, a foreign Pakistani terrorist and his associate Amir Ahmad resident of Banihal (a hybrid terrorist), were killed in the encounter.It further stated that the owner of the building namely Altaf Ahmad as well as the tenant namely Mudasir Ahmad were also called to accompany the search party. Mufti was put under a house arrest after she tried to go to the press colony Srinagar, where the victim’s families were protesting.