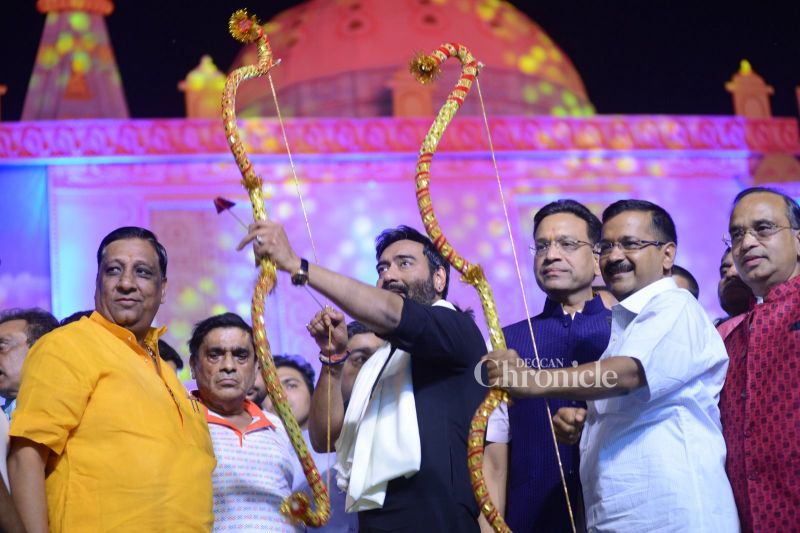 Bustling noises of cheers and laughter echo on the grounds of Lav Kush Ramlila as the annual festivities of Dussehra make their way onto people’s calendars every year. The past two years, due to the Covid-19 pandemic, were a blow to small-scale businesses and vendors. But this year’s Navaratri has brought back the good old charm of festive love and celebrations.
Among many who spread joy is a man who brings smiles to people’s faces with his merry-go-round and giant ferris wheels.
Known to have been one of the best in business for 40 years, Mohammed Aslam gives the magical touch to Lav Kush Ramlila every year with fun amusement rides.
“I have worked with the Lav Kush Ramlila committee since 1992 and plan to keep working with them because I get a lot of respect here,” said Mohammed Aslam as he expressed his gratitude.
Like many business establishments that suffered at the hands of Covid-19, he emphasised how the pandemic played a spoilsport for his business in the past two years as well. “The past two years, in fact, were quite stressful in terms of business. Not just me, my staffers were also distressed due to the lockdown,” he said.
However, a few minutes later, he exuberantly expressed how well the business is picking up and that he was extremely happy to see Ramlila making a comeback this year.
Mohammed Aslam, a resident of Daryaganj in Delhi, conducts many fairs across the Hindi heartland but says he is happiest during Ramlila because of the joy and brotherhood that the festival binds people with.
Every year, the Lav Kush Ramlila is held at the Lal Qila (Red Fort) and thousands of people gather at the place to eagerly watch the pages of the Ramayana come to life.
Not just that, gorging on amazing street food delicacies, taking an adrenaline-pumping fun ride, and just soaking in the festive mood with loved ones, make it an exciting place for people from all walks of life – age, gender, and religion no bar. This year’s speciality, however, lies in the beauty of the backdrop of the Ram Lila – a replica of the famous Ram Mandir in Ayodhya.
Talking about the schedule this year, Ramlila began on September 26, and will culminate with a special appearance of ‘Baahubali’ superstar Prabhas on 5 October.