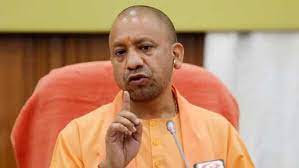 The heat quotient of the high-stakes Mainpuri elections is going to go up further as UP Chief Minister Yogi Adityanath enters the campaign with his first public meeting in Mainpuri scheduled to take place on 28 November.
The Bharatiya Janata Party (BJP) has already unleashed its army of MLAs and ministers to fight the Samajwadi Party in its traditional bastion. CM Yogi will address a public meeting at Karhal’s Narsingh Yadav Inter College.It is expected that Yogi Adityanath will try to influence the minds of the people of Mainpuri continuously until 3 December. The tension of Akhilesh Yadav, who is facing political heat in the Mainpuri by-election, is going to increase after the arrival of Yogi. In fact, CM Yogi Adityanath is holding his first public meeting from Akhilesh Yadav’s constituency.In such a situation, the SP president will have to put more emphasis on Karhal, which is considered an SP stronghold.
Earlier, Uttar Pradesh Deputy Chief Minister Keshav Prasad Maurya held two meetings in Mainpuri. Deputy CM Brijesh Pathak has been holding meetings in Mainpuri for two consecutive days to turn voter moods in the BJP’s favor. Aside from that, Party President Chaudhary Bhupendra Singh and General Secretary Organization Dharampal Singh are doing everything they can to sway the workers.
The Lok Sabha by-election in Mainpuri is a high-profile one. The seat is witnessing a main contest between BJP candidate and former MP Raghuraj Singh Shakya and Dimple Yadav, the wife of Samajwadi Party president Akhilesh Yadav. Earlier, this by-election was considered easy for Dimple Yadav.
The Bharatiya Janata Party has changed all the pre-poll predictions by fielding veteran leader Raghuraj Singh Shakya here.
At present, both parties are putting their full force into the campaign. The late Mulayam Singh Yadav was a continuous MP from here. However, in the last Lok Sabha elections, Mulayam’s victory margin was very low. Since then, it was believed that after Mulayam, Mainpuri would not be easy for the SP.