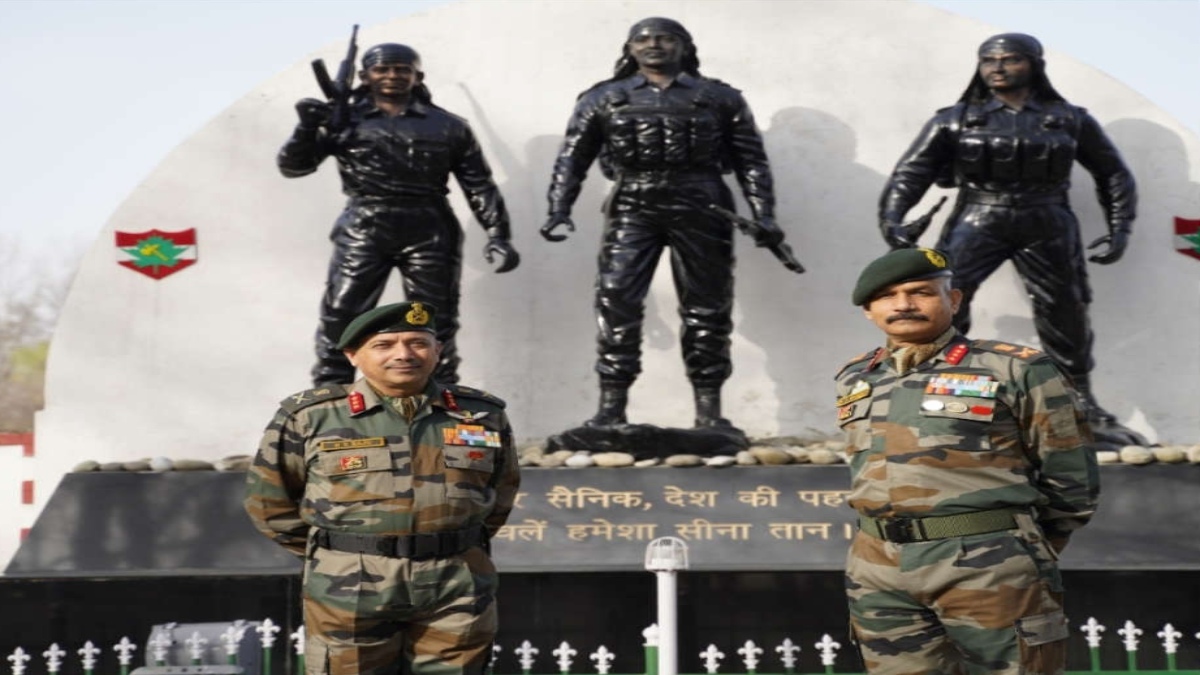 Lt Gen B.S. Raju handed over command of the strategic Kashmir-based 15 Corps to Lt Gen D.P. Pandey earlier this week. The General commanded the Corps in critical phase in 2020 where Kashmir was confronted with the twin challenges of terrorism and Covid-19. Lt Gen Raju’s tenure over the last one year is defined by an improved security environment prevailing both on the Line of Control and in Kashmir. With the civil administration and security forces synergising their efforts to bring normalcy back to Kashmir, terrorism is on decline with assessed residual terrorist numbers being the lowest in a decade.

On the Line of Control, his approach combined a forward heavy deployment enabled by a dense electronic and surveillance grid. Pakistani cease fire violations were dealt punitive responses resulting in operational ascendancy by the Indian Army. To complement relentless and successful counter-terrorist operations, Lt Gen Raju ensured an improved Soldier-Citizen connect. This effort included many successful events all over the Kashmir Valley, co-opting the Awaam in various sports, culture, arts, education, skilling and health initiatives.

The Army effectively used its deployment grid, especially in far-flung areas to be the first respondent in case of need. Grass-root interactions such as intra-dialogue within the youth and ‘Day with Company Commander’ received overwhelming response. Gen Raju strongly propagated for a second chance to the misguided youth, as he believes this to be critical to achieving lasting peace in J&K. The Army has taken proactive steps to connect with the youth including those who have picked up the weapons against the state. There has been a collaborative effort along with society members, families and other stake holders to encourage and facilitate return of the misguided youth from the path of terrorism. The effort has got an encouraging response, success in terms of surrenders and support from all sections of the society, and will get additional impetus in the coming months.

Having served as Uri Brigade Commander, GOC of Victor Force and now as GOC Chinar Corps, Gen Raju reinforced and institutionalised high professional standards and ethical conduct in combat operations. He moves to assume higher responsibilities as Director General of Military Operations of the Indian Army. On the occasion of Republic Day, Lieutenant General B.S. Raju was awarded the prestigious Uttam Yudh Seva Medal (UYSM), in recognition of this contribution in taking Kashmir on a positive trajectory on the path of lasting peace.

In his farewell message, Gen Raju complimented all ranks of Chinar Corps for their dedication and hard work, he also thanked JKP, CAPFs, Civil administration and the Awaam for their relentless support in the joint efforts towards peace and prosperity in J&K. He conveyed his greetings and best wishes to the Awaam of Kashmir and the entire Chinar Corps fraternity.

INDIAN NAVY IN THE INDO-PACIFIC 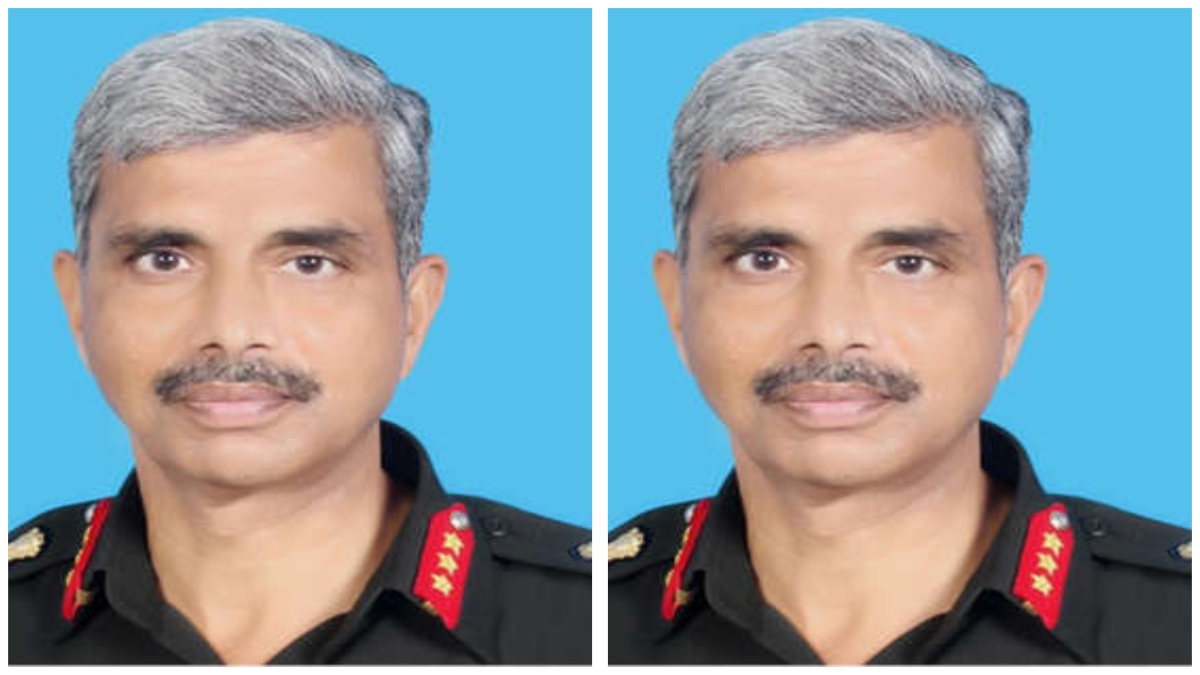 Indian Army’s Mathura headquartered 1 corps has got a new Corps Commander. Lt Gen Manoj Kumar Katiyar has been appointed as the new 1 Corps Commander. 1 Corps is a military field formation of the Indian Army. Lt Gen Manoj Kumar Katiyar is an alumnus of Sainik School Ghorakhal. After his military training in National Defence Academy, Khadakwasla and Indian Military Academy, Dehradun, he was commissioned in 23rd Battalion of the Rajput Regiment in June 1986. He commanded his battalion twice; along the Line of Control in J&K and along the Line of Actual Control in Arunachal Pradesh. He commanded an Infantry Brigade along Western Borders and an Army HQ reserve Mountain Division.

The General Officer has done all important courses to include Defence Services Staff Course and attended the National Defence College. He is also a Distinguished Graduate of National War College, USA. He has been an instructor in Indian Military Training Team in Bhutan and a Directing Staff at Defence Services Staff College. His staff appointments include a Grade 1 post in Military Operations Directorate and Brigadier General Staff appointments in a Corps HQ and a Command HQ. His previous appointment was of Director General Staff Duties in Army HQ. 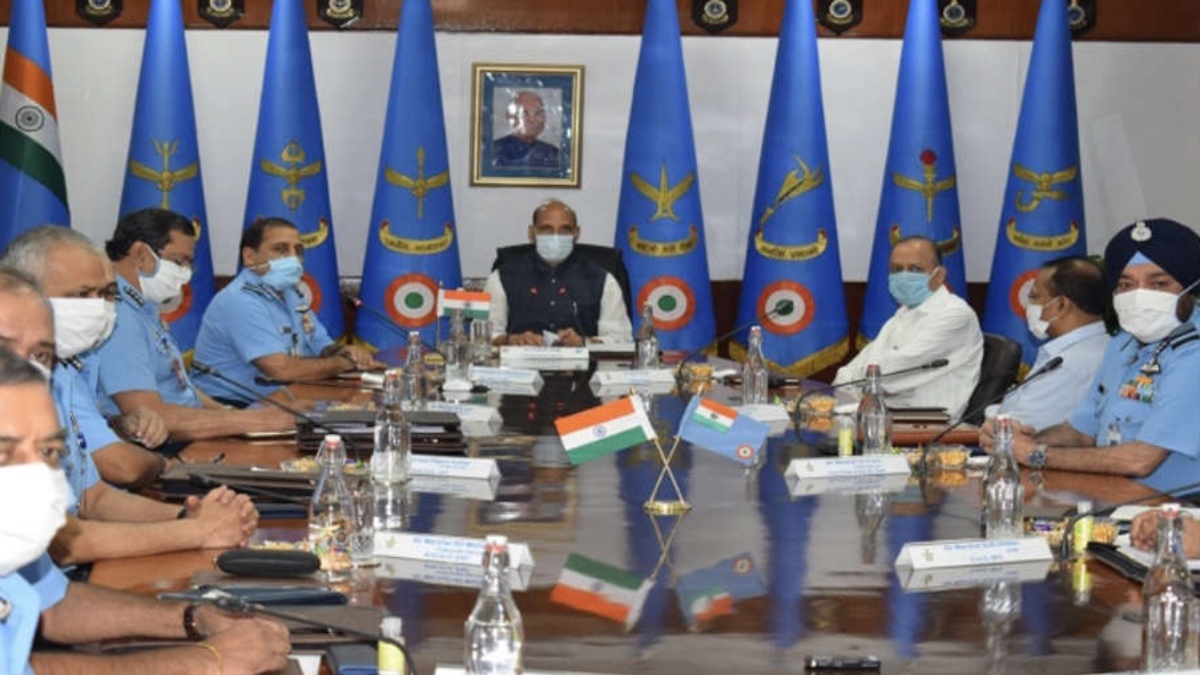 First bi-annual IAF Commanders’ Conference for the year 2021 will be inaugurated by Defence Minister Rajnath Singh on 15th April at Air Headquarters (Vayu Bhawan). The conference of apex level leadership is aimed at addressing the issues of IAF’s operational capabilities in the times to come. A series of discussions would be conducted over a period of three days to address strategies and policies related to capabilities that would give IAF a significant edge over its adversaries. Various welfare and Human Resource measures to improve HR and administrative efficiency will also be discussed.

Air Force Commanders’ Conference is a bi-annual conference held at Subroto Hall, Air Headquarters, Vayu Bhawan. The Conference provides a forum to the senior leadership of the IAF to discuss critical issues pertaining to Operations, Maintenance and Administration. The conference is attended by the Air Officers Commanding-in-Chief of all Commands of IAF, all Principal Staff Officers and all Director Generals posted at Air HQ. 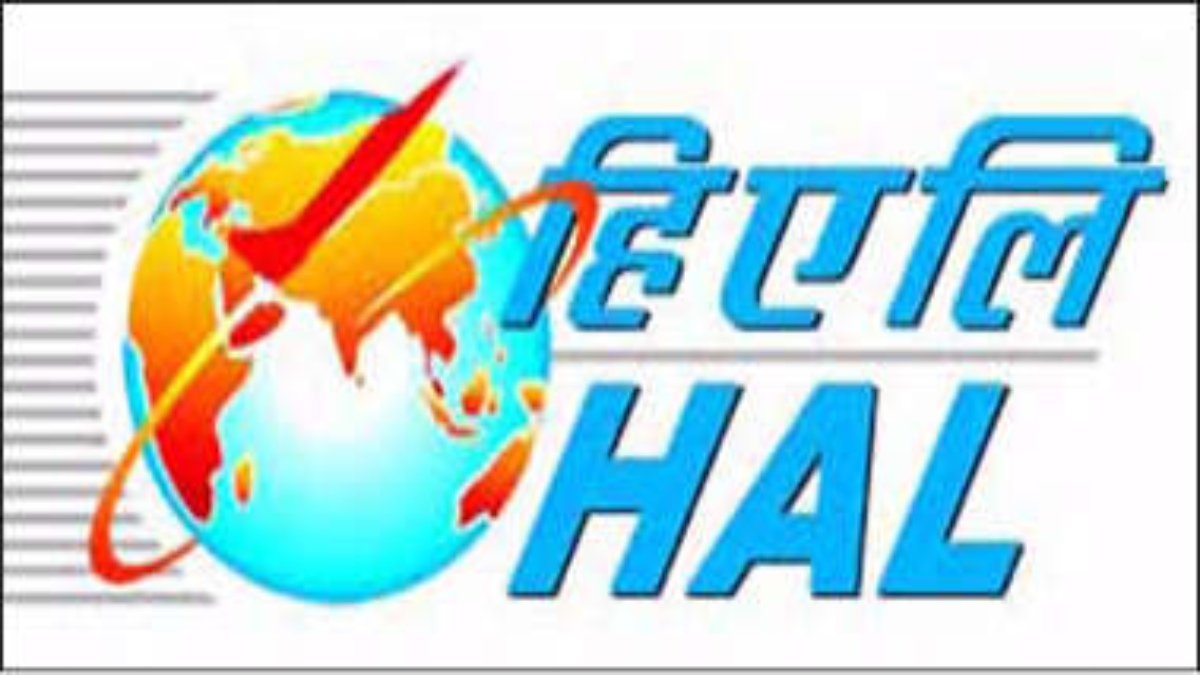 HAL has bagged the first place for Innovative Training Practices 2019-20 at the 30th National Award ceremony held recently at New Delhi by Indian Society for Training & Development (ISTD). “We are honoured to receive such a coveted award. This is a recognition of our relentless efforts to strive for excellence in the area of training and development”, said Mr Alok Verma, Director (HR). Apart from using the in-house talent, HAL has tied up with the best management and training institutes to impart the right training to the professionals.

HAL Management Academy having a sprawling lush green campus of nearly 16 acres with state of the art facilities in Bengaluru is a Centre of excellence for Aerospace Technology and Management professionals. It offers specific courses blending the rich experience and domain expertise with industry exposure to provide trained manpower in aerospace sector. ISTD, established in April 1970, is a national level professional & non-profit society registered under the Societies Registration Act, 1860. It has a large membership of individuals and institutions involved in the area of training and development of Human Resource from Government, Public and Private Sector Organizations & Enterprises; Educational and Training Institutions and other Professional Bodies. The Society is affiliated to the International Federation of Training and Development Organizations (IFTDO), Geneva and Asian Regional Training and Development Organizations (ARTDO), Manila. 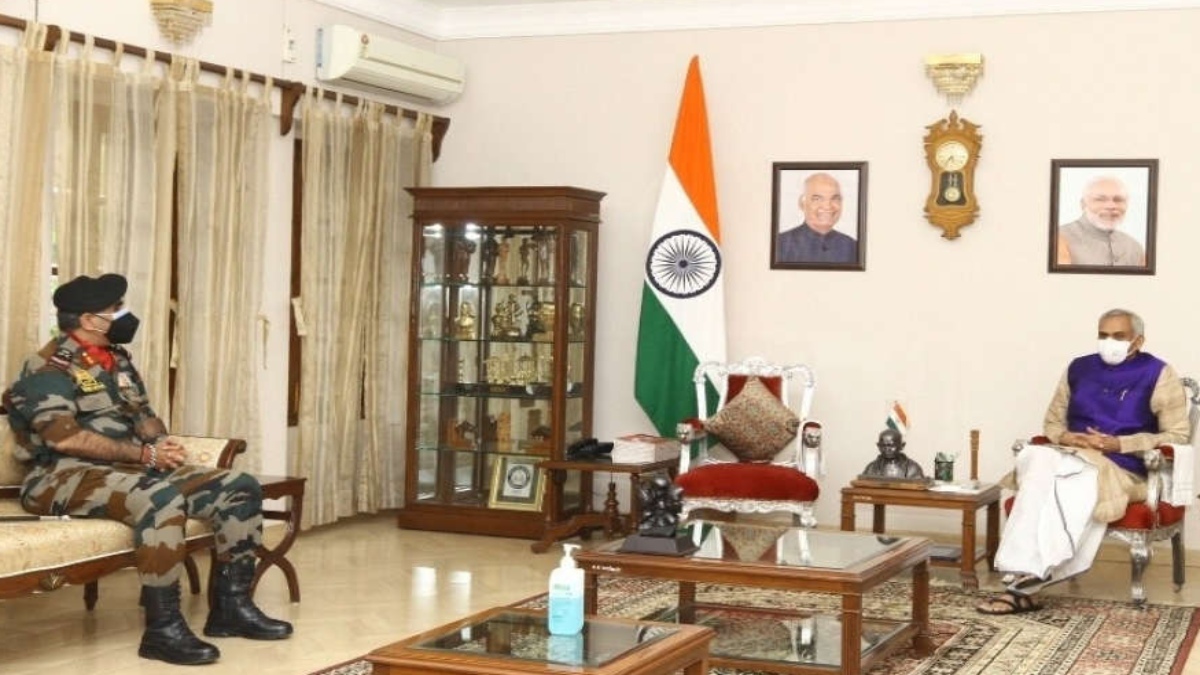 The Governor appreciated the hard work put in by the Officers and staff of Gujarat Directorate in shaping the future of the Cadets of Gujarat and making them model citizens of the country. He also commended the good work done by the cadets through their Social Service and Community Development programmes such as Blood Donation, creating awareness amongst the populace about Covid-19, Swachhta Abhiyan and other activities. He wished the Officers, Staff and Cadets of Gujarat Directorate all the best in their future endeavours also. 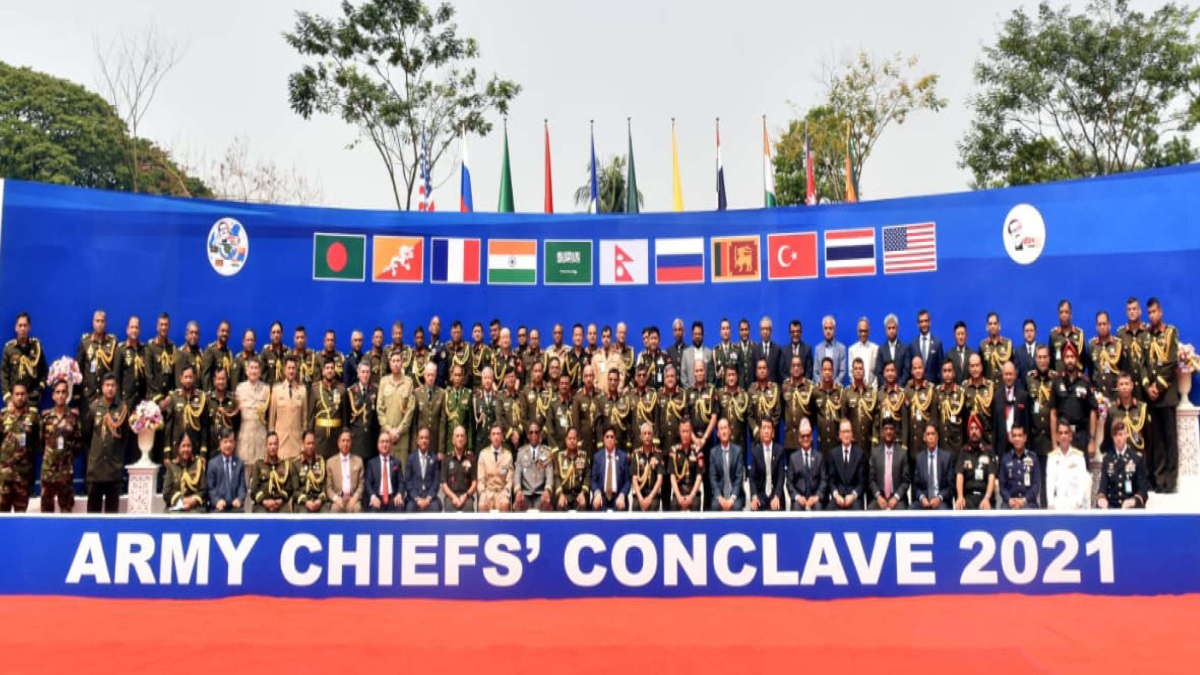 Four day long ‘Teeka Utsav’ (Vaccine festival) is being organised by the Government of India in the country from 11 to 14 April. The vaccine festival is commencing with the birth anniversary of social reformer Jyotiba Govindrao Phule and shall culminate on 14 April coinciding with birth anniversary of Dr BR Ambedkar. In order to inoculate maximum number of eligible people against Covid amid a worrying surge in cases and to support TEEKA UTSAV, 44 Assam Rifles under the aegis of 22 Sect AR/ IGAR(E) made its continuous and deliberate efforts to curtail the upsurge of COVID cases in its area of responsibility by conducting vaccination drives for troops and promulgating information through awareness campaigns for the public in Tamenglong district.

In the present situation where number of positive cases and mortality rate due to COVID is high on daily basis, 44 Assam Rifles battalion headquarter and its COB at Dikuiram reached out to locals to spread the message and appeal locals to get vaccinated as many eligible people as many possible and target zero vaccine wastage. The company commander while addressing the people on the occasion of birth anniversary of Mr Jyotiba Govindrao Phule, the pioneer of women education in India, appealed the public to let their girls study and pursue her dreams. Mr Jyotiba and his wife Savitribai Phule had opened the first school for girls in India way back in Aug 1948. Thus we collectively shall contribute towards social reform and follow the aims of Beti Bachao, Beti Padao campaign. He also conveyed that COVID Appropriate Behaviour (CAB) should be strictly enforced among the local populace.

With an aim to promote CAB, requirement of necessary precautions in the pandemic situation and the necessity of vaccination for the eligible persons was promulgated through various platforms. The unit employed posters, banners, lecture, audio messages through Drones in local languages. The drone based sound bite system was used to disseminate information about proper wearing of masks, hand hygiene, maintaining physical distance and timely vaccination. ‘Dawai Bhi, Kadai Bhi’ message was effectively and profusely spread. The CMO, Tamenglong battalion appraised the public that during this vaccination festival the vaccination drive in coordination with civil medical staff shall be taken to interior areas of Akhui, Azuiram and Dikhuiram.

The aim to educate the locals about the importance of maintaining a healthy day to day life style along with routine exercise/ yoga and good food habits to cope up with current situation shall continue for the said period of the Teeka Utsav. The attendees to these awareness campaigns would be greatly benefitted by the information pertaining to COVID free health. The battalion is endeavouring to incorporate various civil administration authority, church authorities, CSOs, Youth leaders and public opinion makers to further spread the awareness about vaccine.

Exercise Shantir Ogrosena-2021, a 10-day-long multinational military exercise, which started on 4 April, culminated on Monday at Bangabandhu Senanibas (BBS), Bangladesh. Troops from four countries participated in this exercise with observers from the US, UK, Russia, Turkey, Kingdom of Saudi Arabia, Kuwait and Singapore. The aim of the exercise was to strengthen defence ties and enhance interoperability amongst neighbourhood countries to ensure effective peace keeping operations. The Armies of all participating nations shared their wide experiences and enhanced their situational awareness through robust information exchange platforms.

The exercise culminated with a validation phase and closing ceremony organised on the theme of Robust Peace Keeping Operations jointly undertaken by contingents of Indian Army, Royal Bhutanese Army, Sri Lankan Army and Bangladesh Army, preceded by an Army Chiefs Conclave. General M.M. Naravane, Chief of the Army Staff witnessed the validation phase of the exercise. He had also delivered a Keynote Address on “Changing Nature of Global Conflicts: Role of UN Peacekeepers” on Sunday. The COAS also interacted with the senior officers of the participating nations and Military Observers from other countries. The contingents displayed highest standards of professionalism during the exercise and also displayed their skills in volleyball, firing and cultural activities.