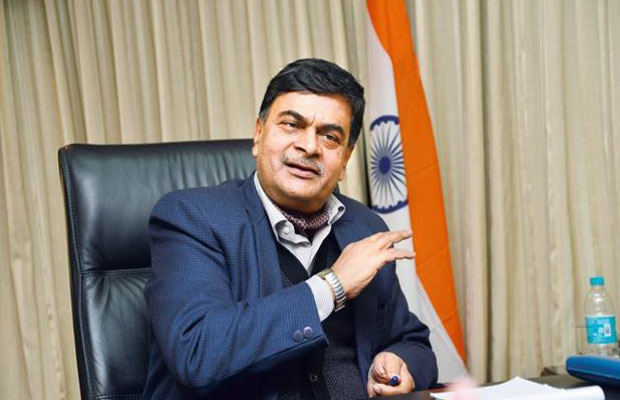 A high level Inter-Ministerial meeting under the co-chairmanship of R.K Singh , Union Minister of Power & NRE and Bhupender Yadav, Union Minister of Environment, Forest & Climate Change was held today to review the progress of biomass co-firing in thermal power plants along with Parali management in NCR and adjoining states.
The meeting was held in the backdrop of the onset of the harvesting season for Kharif crops in the country. Secretaries of Ministries of Power and MOEF&CC, senior officials from MoA&FW, Chief Secretaries of governments of Punjab, Haryana & UP, Chairman-Commission of Air Quality of NCR along with officials of these ministries as well as heads of all power utilities in the NCR region attended the meeting. The meeting also drew participation from important government bodies like CAQM, CEA, CPCB etc.
R.K. Singh emphasised that orders for procurement & use of biomass pellets in TPPs must be expedited and at least 5% Co-firing is to be ensured.
Singh highlighted that power utilities should make all out efforts to complete the procurement process for existing tenders as soon as possible. He further underlined that till the time supply from the long term tenders is not started, power utilities should start procurement for the short term via alternate methods like commission agents as the harvesting season has already started.
R.K Singh also stressed that measures should be taken for expeditious setting up of manufacturing facilities for torrification of biomass pellets in different locations to overcome the challenges of supply of biomass’s pellets.
Singh further suggested that Principal Secretary (Environment) from each State should act as nodal person for Biomass cofiring in the state.
Singh emphasised that the ministry would put penal provisions on those thermal power plants that do not comply with the MoP’s policy on biomass co-firing. Sufficient emphasis was given on the fact that the health and safety of the citizens was topmost priority and no one has the right to put innocent lives in danger.
Bhupender Yadav, Union Minister of Environment, Forest and Climate Change welcomed the suggestions. He further communicated that Ministry of Power ( MOP) may think of giving Must Run status for the thermal power stations co-firing biomass. He praised the initiative by MOP in mission mode and remarked that all should support Biomass Mission objective, which is a Mission of Hon’ble Prime minister of the country.
It is to be noted that while till FY 2020-21, only 8 power plants had co-fired biomass pellets, the corresponding number has increased to 39 as on date. In the NCR region, 10 TPPs have started co-firing. As on date, 83066 MT of biomass has been co-fired in 39 thermal power plants across the country totalling to a capacity of 55390 MW. In NCR region, the biomass co-fired is 22,696 MT out of which 95% has been done by NTPC. Further, 99% of the PO in place has been contributed by NTPC Ltd. It was suggested that other GENCOs should follow the footstep of NTPC for successful implementation of Biomass co-firing in the country.
On the biomass pellet procurement side, a large no. of tenders have been floated by several power plants. Around 106 MMT of biomass tenders are at various stages of the tendering process. Out of these, order has already been placed for 43.47 Lac MT of biomass tenders by 35 power plants while tendering process is ongoing for 1064 Lac MT.
It was informed that 25 number of offline and online training cum awareness programmes for various stakeholders in the sector including farmers, pellet manufacturers and power plant officials were held. While in the FY 2021-22, 10 such programs were held in a period of six months, 15 events have already been held in a period of six months in this Financial Year.
During the review, it was observed that the target of 5% co-firing of biomass along with coal in TPPs in the country was still far off. However, most power plants have issued long term tenders and the situation is expected to improve when the supply will start in those tenders. Direction was given to all thermal power plants in NCR region to install biomass pellet manufacturing plants (torrefied / non-torrefied) in their premises, including the private power companies. GENCOs may also explore to put up plant through Consortium. It was further highlighted that the non-compliance in this regard would be viewed very strictly.
CAQM was also communicated to start considering penal provisions on Thermal Power Plants which are not taking enough steps to curb emissions and not co-firing sufficient quantity of biomass. CPCB informed that financial incentives are to going to be provided for setting up pellet manufacturing plants in the NCR region.
Ministry of Agriculture apprised that the central government has distributed Rs 600 crore worth of machinery to the Custom Hiring Centres of state governments under its scheme which can be used for stubble collection.