INFILTRATION, FLOODS WILL BE A THING OF PAST IN ASSAM IF BJP IS RE-ELECTED: AMIT SHAH - The Daily Guardian 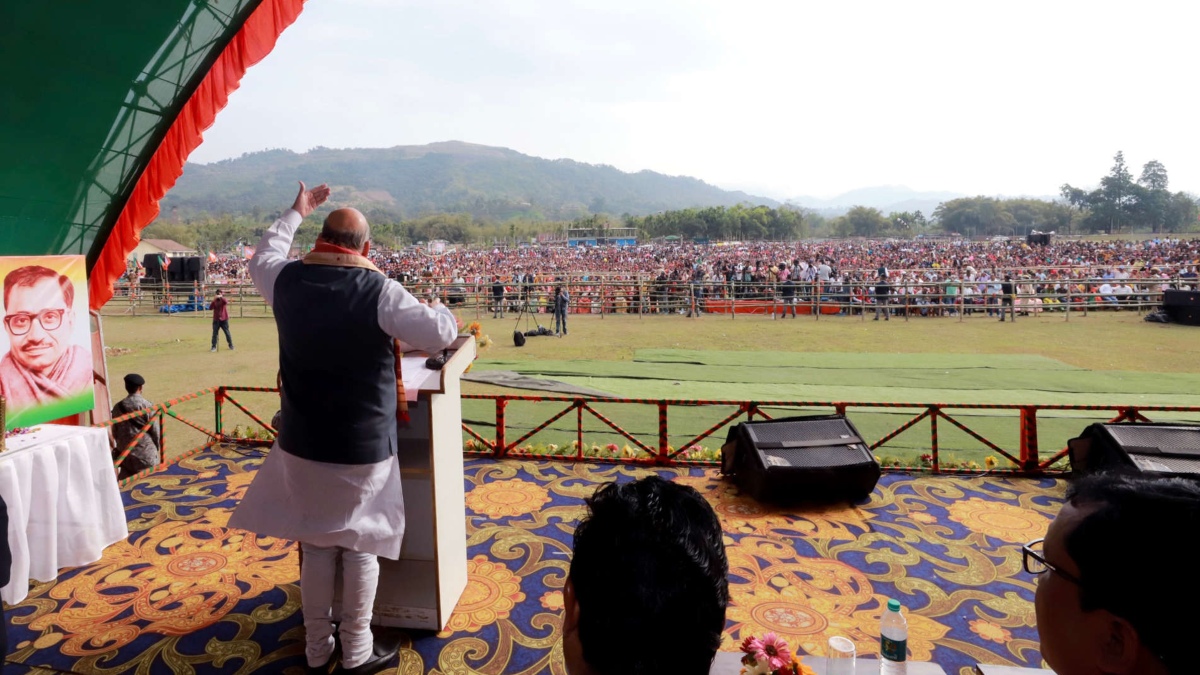 Infiltration will be a thing of the past in Assam if the Bharatiya Janata Party (BJP) is voted to power again, said Union Home Minister Amit Shah on Sunday while hitting out at Congress leader Rahul Gandhi for his party’s alliance with Badruddin Ajmal’s All India United Democratic Front (AIUDF) in the upcoming assembly elections in the state.

“Can Rahul Gandhi, who has taken the support of Badruddin Ajmal, protect Assam from infiltration? Can Assam be safe with Badruddin? Give us (BJP) another five years and infiltration will be a thing of the past in the state,” Shah told the large gathering at a campaign rally in Margherita of Assam’s Tinsukia district. He further hit out at the Congress for their alliances in other poll-bound states and said that Gandhi’s party can ‘stoop to any low to win’.

“Congress sees votes in infiltrators, but we don’t do vote-bank politics. In Kerala, they have partnered with the Muslim League that divided the nation. In Bengal, it is Furfura Sharif (Indian Secular Front), and here it’s Badruddin Ajmal. This party can stoop to any low to win,” he said.

“In some days, it will be decided who will run Assam for the next five years. On one hand, there is Prime Minister Narendra Modi, Chief Minister Sarbananda Sonowal, and Himanta Biswa Sarma’s leadership. And on the other hand, Rahul Gandhi and Badruddin Ajmal’s leadership. Tell us who can develop Assam?” the Home Minister asked.

The Union Home Minister visited the district as part of the marathon election campaign he is undertaking across poll-bound states.

Addressing another rally in Nazira, Shah promised the people of Assam a flood-free state. “Give the BJP another 5 years and Assam will become a state free of floods. There will never be another flood here,” Shah said.

“Five years ago, we promised to free Assam from terrorism. I want to ask the people of Nazira, have any youth died due to such movement in Nazira? Voting for Congress means a vote for Badruddin Ajmal, and voting for him will fill Assam with infiltrators. Do you want a party that will fill Assam up with infiltrators or a party that throw them out? Only the BJP can do this,” he added.

“The opposition can fight, but they cannot raise any corruption allegation against Sarbananda Sonowal and Hemanta Biswa Sarma. After 2014, PM modi gave Assam Rs 1,55,300 crore for its development, while during (former PM) Manmohan Singh’s tenure, Assam was given Rs 80,000 crore,” he said.

Shah also said, “The Congress was in power for so long, but never gave late Assamese singer-composer Bhupen Hazarika a Bharat Ratna. The BJP feels that every state must walk ahead with its culture, language and traditions. Assam’s cultural heritage will be taken forward by the govt that will be formed under the leadership of PM Modi.”

The Assembly elections in Assam for 126 seats will be held in three phases starting from 27 March.