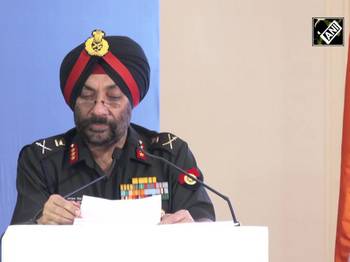 Pointing out that now the Army was also using high-energy technology to construct its buildings for operational usage, the topmost engineering officer of the Indian Army on Wednesday said the country was on the cusp of an infrastructure revolution in view of the developments in the sector.
Speaking at a conclave in Goa, the Indian Army’s Engineer in Chief, Lt. Gen. Harpal Singh, said, “The Military Engineering Services, an infrastructure arm of the Corps of Engineers of the Indian Army, is taking up niche technologies to bring in faster and quality construction all around.” “India’s first 3D concrete printed permanent married accommodation for soldiers was constructed by co-opting a start-up by the Military Engineering Service in a matter of three weeks. More such efforts are on the anvil,” he said.
Citing the Gati Shakti National Master Plan in Oct 2021 launched by Prime Minister Narendra Modi, he said with schemes like multimodal connectivity, the country was heralding a new chapter in governance.
“This initiative brought in 16 Ministries, including Railways and Highways, on a single digital platform for integrated planning and coordinated implementation of infrastructure connectivity projects,” the officer said.
He stated that the initiative will incorporate the infrastructure schemes of various ministries and state governments like Bharatmala, Sagarmala, inland water transport, dry/land ports, UDAN, etc.
“Therefore, we can see that we are already on the cusp of an infra revolution,” he said.
Speaking on the issue of waste management, Singh said this is one of the key problems of modern society due to the ever-expanding volume and complexity of domestic and industrial waste and their implications on health and the environment.
“Some of the new initiatives in this sector are waste level sensors and AI-based robotic recycling methodologies, as well as solar-powered trash compactors, etc. We can also look at waste-recycled concrete, road making with waste plastics, etc., as well as plasma gasification approaches,” he said.
He stated that plastic pollution was a serious issue that everyone could relate to, and that our civil engineers were working to find solutions. One such idea is to use plastic waste in road making. India has begun testing this idea when they build plastic roads.
He said, however, there are concerns regarding micro plastics and the fact that they will leach into the soil and pollute it, harming the ecosystems. With better application and integration, though, this concept could be a big-time game-changer.
He said, similarly, the use of photovoltaic glazing on roofs, windows, and other building materials can help replace traditional glass material usage, and become beneficial for civil engineers as they can invest in and implement more sustainable construction materials into their overall plans. Enhanced conversion of plastics into fuels by using pyrolysis processes will be a great step forward, he said.