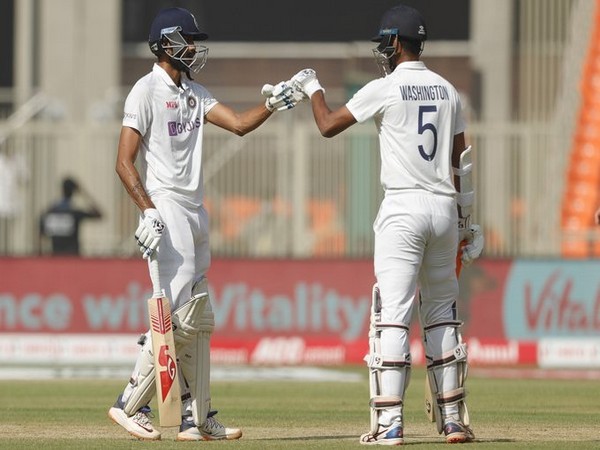 Ahmedabad (Gujarat) [India], March 6 (ANI): Bowling all-rounder Washington Sundar on Saturday missed out on what would have been a well-deserved maiden hundred, remaining unbeaten on 96 while he saw his batting partners fall at the other end as India was bowled out for 365 in their first innings on Day Three of the fourth Test against England here at the Narendra Modi Stadium.
With the efforts of Sundar and Rishabh Pant (101), India has managed to take a lead of 160 runs and England would now be looking to provide rear-guard action in order to delay the inevitable.
Resuming Day Three at 294/7, overnight batters Sundar and Axar Patel saw off the first hour with ease and the duo scored runs at a brisk pace, piling on further misery on the tired England bowlers. The first hour saw India scoring 50 runs.
Both the batters extended their partnership to 106 runs, but with seven runs from his maiden half-century, Axar (43) was dismissed via a run-out in the 114th over of the innings. In the very next over, Ishant Sharma (0) was out lbw by Ben Stokes and India was reduced to 365/9 with Sundar still four runs away from his maiden ton.
In the same over, Stokes clean bowled Mohammed Siraj (0), thus bringing an end to India’s first innings.
Apart from Pant and Sundar, Rohit Sharma also contributed with valuable 49 runs.
England, after winning the toss, had scored 205 runs in their first innings before they were bundled out in the third session of Day One of the final Test.
Brief Scores: England 205; India 365 (Rishabh Pant 101, Washington Sundar 96*, Ben Stokes 4-89). (ANI)