HOW 75TH INDEPENDENCE DAY WAS CELEBRATED AT RED FORT 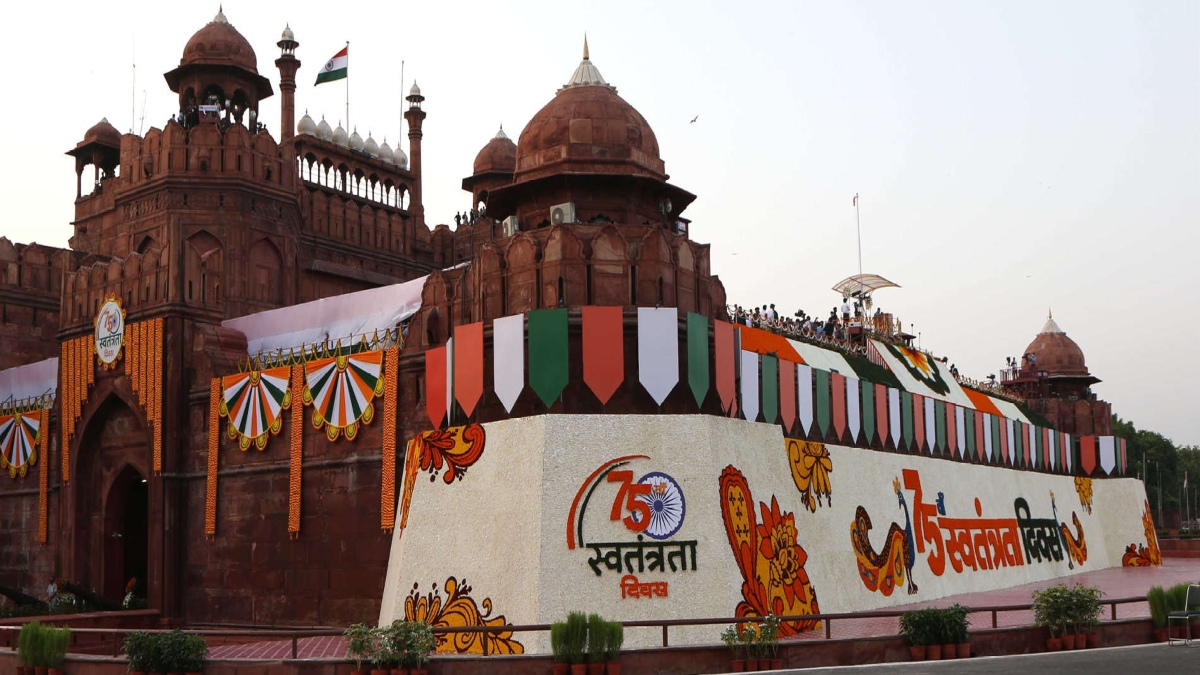 The Nation celebrated ‘Azadi ka Amrit Mahotsav’, marking the 75th year of Independence from the foreign rule. The whole country has been gripped by patriotic fervour. A series of events have being organised across the country by different ministries of Government of India, various state governments & Union Territories, the Armed Forces and general public alike to mark this momentous occasion.Prime Minister Narendra Modi lead the Nation in celebrating this historic 75th Independence Day from the ramparts of the Red Fort in New Delhi. He hoisted the National Flag and delivered the customary address to the Nation. It may be recalled that the Prime Minister had launched ‘Azadi Ka Amrit Mahotsav’ from Sabarmati Ashram at Ahmedabad in Gujarat in March 2021 to celebrate 75 years of India’s Independence. The celebrations will continue till August 15, 2023.

After inspecting the Guard of Honour, Prime Minister Modi proceeded to the ramparts of the Red Fort where he was greeted by Raksha Mantri Rajnath Singh, Raksha Rajya Mantri Ajay Bhatt, Chief of Defence Staff General Bipin Rawat, Chief of Army Staff General M M Naravane, Chief of Naval Staff Admiral Karambir Singh and Chief of Air Staff Air Chief Marshal R K S Bhadauria. The GoC Delhi area escorted the Prime Minister to the dais on the rampart to hoist the National Flag. After being hoisted, the Tricolour received a ‘Rashtriya Salute’. The Navy Band, consisting of 16 men played the National Anthem during hoisting of the National Flag and the ‘Rashritya Salute’. The Band was conducted by MCPO Vincent Johnson.Lt Commander P Priyambada Sahoo assisted the Prime Minister in hoisting the National Flag. It was synchronised with the 21 Gun Salute fired by the valiant gunners of the elite 2233 Field Battery (Ceremonial). The ceremonial battery is commanded by Lt Col Jitendra Singh Mehta and the Gun Position Officer was Naib Subedar (AIG) Anil Chand.

The National Flag Guard comprising five officers and 130 men from the Army, Navy, Air Force and Delhi Police presented Rashtriya Salute at the time of hoisting of the National Flag by the Prime Minister. Commander Kuldeep M Neralkar from the Indian Navy was in command of this Inter-Services Guard and Police Guard. The Navy Contingent in the National Flag Guard is commanded by Lt Commander Praveen Saraswat, the Army Contingent by Major Anshul Kumar and the Air Force contingent by Sqn Leader Rohit Malik. The Delhi Police contingent will be commanded by Additional DCP (South West District) Shri Amit Goel.

Thirty-two Olympic winners, including javelin thrower Subedar Neeraj Chopra, India’s first ever Gold Medallist in track and field, along with two Sports Authority of India (SAI) officials were invited to participate in the celebrations at the Red Fort. Around 240 Olympians, support staff and SAI & sports federation officials were also invited to grace the Gyan Path in front of the Ramparts. In Tokyo, India recorded its best-ever medal haul in the Olympics by bagging a total of seven medals – one Gold, two silver and four bronze. To honour the Corona warriors who played a vital role in fighting the invisible enemy, COVID-19, a separate block on the South side of the Rampart was created.

For the first time ever, this year as soon as the National Flag was hoisted by the Prime Minister, flower petals were showered at the venue by two Mi 17 1V helicopters of the Indian Air Force in Amrut Formation. Captain of the first helicopter was Wing Commander Baldev Singh Bisht. The second chopper was commanded by Wing Commander Nikhil Mehrotra. After the showering of flower petals, the Prime Minister addressed the Nation. At the conclusion of the speech of the Prime Minister, the cadets of National Cadet Corps (NCC) sung the National Anthem. Five hundred (500) NCC cadets (Army, Navy and Air Force) from different schools took part in this festival of National Fervour.