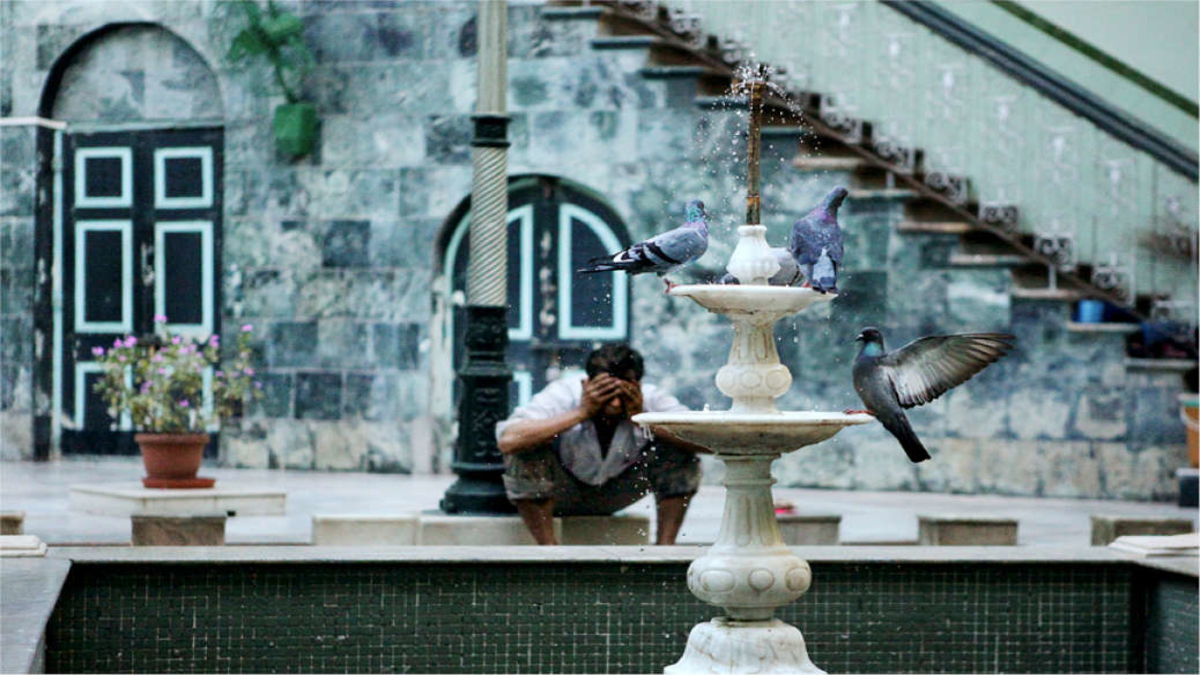 Photography is a highly individualistic art—one that gives a clear insight into the photographer’s vision. Delhi-based Hasnain Soomar certainly lives by this adage, and his latest exhibition of photographs titled ‘The Meeting Point’ proves it. The exhibit is on display at the Capital’s famed Dhoomimal Art Gallery till 10 February 2022.

“The Meeting Point is a multi-dimensional convergence of memories, duality, reality, and moments of simple pleasures expressed through the lens of Hasnain Soomar,” explains Uday Jain, the Director of Dhoomimal Gallery. “Inspired by Raghu Rai’s coffee table books, Soomar rediscovers and presents India through his personal lens,” he adds.

Soomar studied at the Chelsea College of Art and Design in London. He has worked on a number of feature films with Karan Johar, Ramgopal Verma, and Kaizad Gustad, and made a name for himself in fashion photography, having worked with Farrokh Chothia. He also teaches the art of photography to children with special needs, those from lower-income households, as well as the families of the craftspeople of India.

“I take inspiration from walking in historic places, crowded streets, large spaces, and being open to the possibility of finding a photograph anywhere. The uncertainty of things, people, and situations walking into my frame, and the challenge to make it all work as a photograph are what I thrive on,” explains Soomar speaking about his work.

Dhoomimal Gallery is the oldest gallery of modern art in India and is based in Connaught Place in Delhi since 1936. The gallery was started by Uday Jain’s Grandfather Shri Ram Babu. The gallery’s new swanky look after the renovation has been appreciated by many.

“I had bought Hasnain’s work from an exhibition in Mumbai which had been curated by Farah Siddiqui Khan. I instantly liked his works as they were spiritual but not religious which I feel is the need of the hour. A few months later, I met Hasnain in Delhi and thought we must show his work. It’s one of our first photography shows,” explains Jain speaking about the collaboration for ‘Meeting Point’.

For this collection, Soomar travelled to ashrams, ghats, mosques, and Mughal monuments, and captured the symbolism inherent in scripted walls—both in Hindu and Islamic architecture, while remaining a silent and distant observer. Some images were captured during the pandemic and highlight the importance of personal spaces and solitude. “These might give one the feeling of discomforting isolation and a human disconnect. At the same time, there is also a positive feeling of the rise of a new era of solace, higher optimism, spirituality, hope, humanity, peace, wellness, and most importantly inner and personal happiness. This duality is what I found most intriguing,” shares Soomar.

Soomar highlights the jaalis as being symbolic of the filters used in social media. As people focus on how they want to portray themselves, he feels there is no stopping the ultimate spiritual freedom, which is bound to come through. The jaalis also symbolise his attempt to filter the fear within and without, allowing light to travel through the core of our being. He shares, “All the photographs in the series come from deep spiritual space. They look mundane on the surface but capturing these on my lens was a meditative experience in itself.”

A man at the mosque performing the Wazu—the cleansing ritual before offering a prayer—is described as an image that addresses the present and the future, creating a meeting point between what is and what is to be. The birds dancing around the water captures a moment of discovering unbridled joy in performing a routine task. Two boys jumping into the river are a reminder of the ultimate taste of freedom from all fears and limitations.

“For me, ‘Meeting Point’ is where opposites unite and merge in a way that darkness gives way to light, fear to hope, and movement to stillness,” he says.

Putting this exhibition together took almost three to four years, and now Soomar is ready for his next venture—showcasing paintings that are a mix of abstraction and calligraphy. These works are also based on spiritualism, which is the leitmotif of his work.

Dhoomimal Gallery is preparing for the upcoming India Art Fair, which was unfortunately cancelled last year due to Covid-19. “We are currently also showing steel sculptures by Shovin Bhattacharjee which have been very well received. Alongside the India Art Fair exhibit, we will put up a show on linearity titled ‘Lines by Lines’, which captures the essence of time travel in the works of modern artists like Souza, Swaminathan, Gaitonde, senior contemporaries like Zarina, Nasreen, and Rana, as well as young contemporaries like Parul Gupta and Noor Ali,” explains Jain.

The photography exhibit ‘Meeting Point’ by Hasnain Soomar is on display from 10 December till 10 February from 11 am to 7 pm at Dhoomimal Gallery 8-A, Block A, Connaught Place, New Delhi.

A WORTHY SLICE OF LIFE