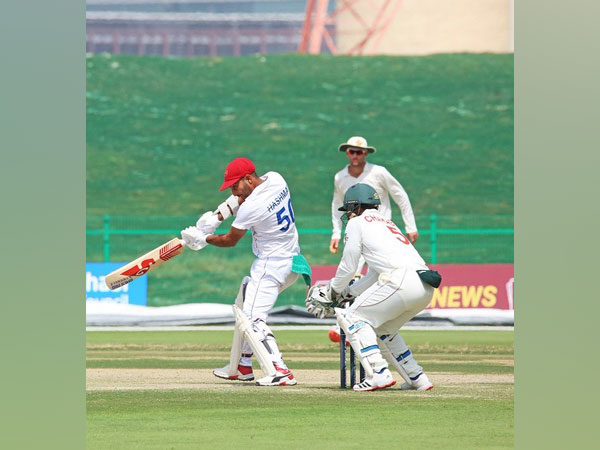 Abu Dhabi [UAE], March 11 (ANI): Batsman Hashmatuallah Shahidi on Thursday became the first Afghanistan cricketer to hit a double ton in an innings of a Test match. The 26-year-old cricketer achieved the feat in the ongoing second Test against Zimbabwe here at the Sheikh Zayed Stadium.
Shahidi is also only the third Afghanistan batsman to hit a century in the longest format of the game. Rahmat Shah and skipper Asghar Afghan are the other two batsmen who have hit a Test ton.
Shahidi on Thursday became the second Afghanistan batsman to cross the 150-run mark in a Test inning. Skipper Afghan is the first Afghanistan batsman to hit 150 and interestingly both those feats have been achieved by the duo on Thursday against Zimbabwe.
Afghan has also become the leading run-scorer for his side in the longest format of the game, having played most Tests among his teammates.
Coming to the second Test, Shahidi’s record-breaking double ton (200*) has put Afghanistan in a commanding position against Zimbabwe on day two.
Zimbabwe has scored 50/0 at the end of day two and trails by 495 runs. The side didn’t lose a wicket, but the day belonged to Afghanistan’s first double centurion in Tests, Shahidi.
Afghanistan was dismissed for 131 and 135 in the first Test, but the side made a comeback with an improved batting performance in the second game.
Afghan and Hashmatullah displayed dominant performance as they added 81 runs to their overnight total without losing a wicket in the first session on day two.
The duo continued to pile further misery on Zimbabwe before spinner Sikandar Raza finally got the breakthrough when he trapped the skipper in front of the stumps to reduce Afghanistan to 428/4.
Afghanistan declared their innings on 545/4 after Shahidi completed his unbeaten double ton. (ANI)