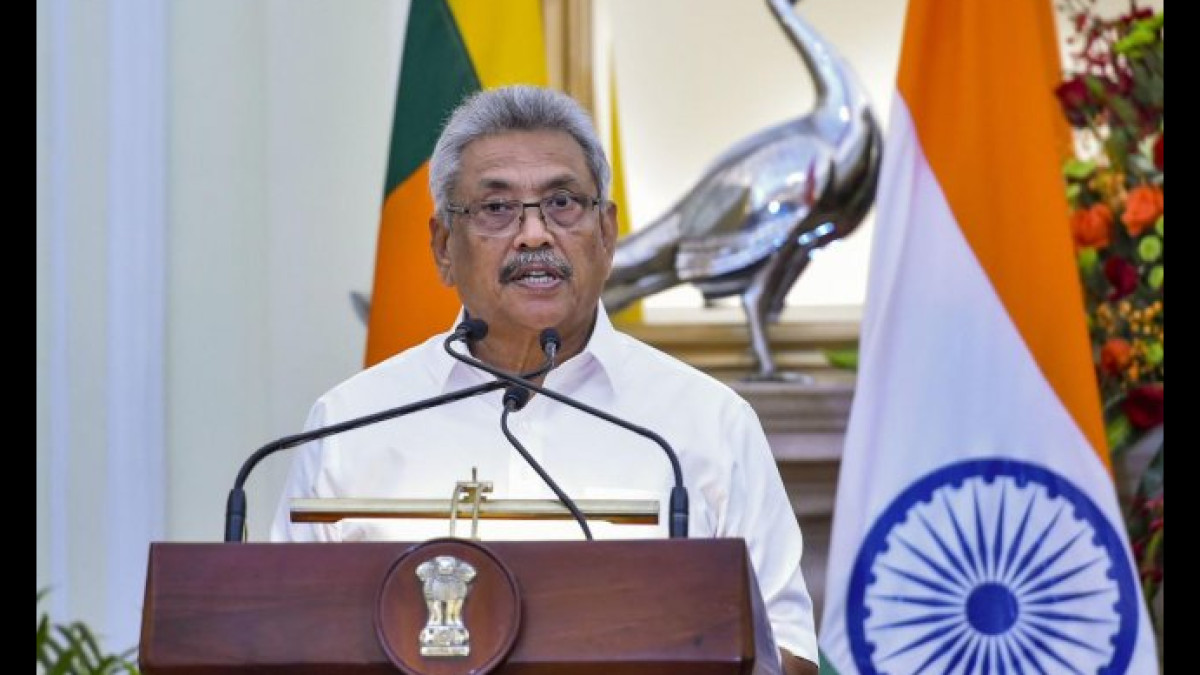 Amid pressure from the public uprising in Sri Lanka, the country’s embattled President Gotabaya Rajapaksa on Thursday tendered his resignation to the Speaker of the Parliament.

Sri Lankan Speaker’s office said that the Speaker of Parliament has received the resignation letter of Rajapaksa. Meanwhile, Singapore’s Ministry of Foreign Affairs confirmed that Rajapaksa has been allowed entry into Singapore on a private visit and he has not asked for asylum nor has he been granted asylum.

“In response to media queries, it is confirmed that Mr Rajapaksa has been allowed entry into Singapore on a private visit. He has not asked for asylum and neither has he been granted any asylum. Singapore generally does not grant requests for asylum,” said the Singapore MFA.

Rajapaksa who flew from the Maldives arrived in Singapore on board a Saudia Airlines flight on Thursday evening, media reports said.

The flight touched down at Singapore Changi airport at 7.17 pm (local time). Rajapaksa is however expected to be in Singapore only in transit and is expected to fly into the Middle East later in the day, reported Daily Mirror.

According to earlier reports, Rajapaksa and his wife were expected to stay in Singapore and not travel further to the Middle East. As per various media reports, the Sri Lankan President and his wife, who took Saudia Airlines flight SV788 to Singapore, were

expected to travel to Jeddah.

Rajapaksa, 73, had gone into hiding after crowds of protesters stormed his residence on July 9 and he had announced that he will hand over his resignation letter on Wednesday.

Earlier, Rajapaksa along with his wife escaped to the Maldives. Subsequently, the speaker appointed Prime Minister Ranil Wickremesinghe as the interim President of Sri Lanka.

Meanwhile, in Sri Lanka, the curfew has been imposed from 12 pm on July 14 till 5 am on July 15, within the Colombo District, the government information department announced.

Earlier in the day, “GotaGoGama” protesters announced that they will peacefully hand over government-occupied buildings including President’s House, Presidential Secretariat, and Prime Minister’s Office, aiming to restore peace in the country.

Sri Lanka Army deployed tanks near Parliament on Thursday to prevent protesters from entering the Parliament.

Sri Lankan political parties after holding a discussion will reach a consensus and propose a name for the position of Prime Minister to the Speaker of the Parliament, local media reported.

Sri Lankan MP from Colombo Harsha de Silva said that after holding a discussion a name for the position of Prime Minister will be proposed to the Parliament Speaker Saturday at 10 am.

Taking to Twitter, the MP wrote, “Responding to request by PM Ranil Wickremesinghe to the Sri Lankan Parliament Speaker to propose a name by consensus for PM, opposition parties will today discuss with various parties and groups in government to get such consensus. We will propose this name to the Speaker at 10 am tomorrow.”

Meanwhile, the Sri Lankan Army soldiers are said to have been authorised to use necessary force to prevent the destruction of property and life amid the ongoing protests in the island nation in view of the severe economic and political crisis, Daily Mirror reported citing Army media.

On July 9, demonstrators forcibly entered the office of the President and the Prime Minister and his residence, and a fierce face-off between protesters and security forces was reported in Colombo.

The country is facing a severe shortage of fuel and other essential supplies and is in the throes of its worst-ever economic crisis with soaring inflation. The oil supply shortage has forced schools and government offices to close until further notice.

The economic crisis will push many families into hunger and poverty – some for the first time – adding to the half a million people who the World Bank estimates have fallen below the poverty line because of the pandemic.