Gandhi Statue vandalised in New York, not the first time - The Daily Guardian 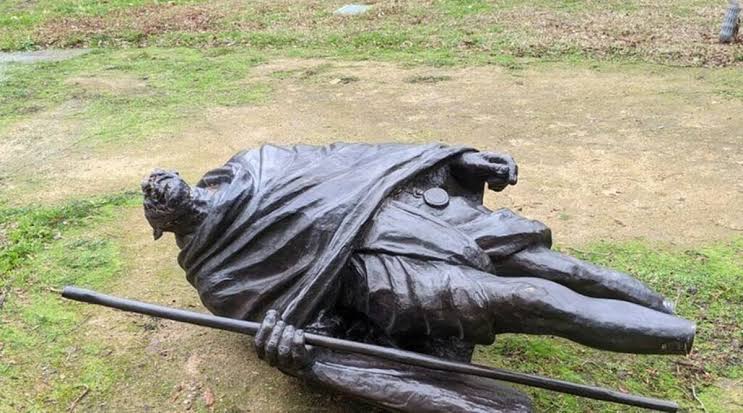 This is a representative image (File Photo)

According to allegations in the news on Friday, unidentified individuals have committed a probable hate crime by smashing a hand-crafted statue of Mahatma Gandhi at a Hindu temple with a sledgehammer after vandalising it earlier this month. According to reports, surveillance video shows a person breaking the head off and toppling a statue of Gandhi on Tuesday after bashing it with a sledgehammer.

The statue is stomped on and repeatedly pounded by a group of six people moments later before they flee, according to the report “To see them coming after us like this is very painful,”  Lakhram Maharaj, the founder of Shri Tulsi Mandir in South Richmond Hill remarked.

On Wednesday morning, Maharaj discovered the Gandhi statue was in ruins. the letter “dog” was spray painted down the street and in front of the temple, it claimed.

The identical Gandhi statue was vandalised two weeks prior, according to the investigating authorities. According to the story, Assemblywoman Jenifer Rajkumar remarked that the vandalism of the Gandhi statue “just flew in the face of all of our ideals and it’s quite troubling for the community.”

According to media reports, the New York Police Department is looking into both occurrences as potential hate crimes. Many people in the neighbourhood, according to Maharaj, are now terrified of visiting the temple.

“I cannot show the congregation that I am worried because if I show them that I’m worrying and I’m not strong, how will they be strong?” the report quoted him as saying. The temple authorities could not afford to replace the Gandhi statue, because it was handcrafted and cost about USD 4,000, the report said. “I want to know why they did it,” Maharaj said. “This is not the first time that a statue of Gandhi has been desecrated in the US.”

An eight-foot-tall statue of Gandhi that was in Union Square in Manhattan was vandalised in February of this year by unidentified people. In front of the Indian Embassy in Washington, DC, Khalistani supporters desecrated a Gandhi statue in December 2020.

TVM man detained for attempting to assault a woman

With a picture of himself with long hair, Salman Khan puts fans in suspense regarding his upcoming movie.