FIRE BREAKS OUT AT HOTEL IN LUCKNOW, 2 DEAD - The Daily Guardian 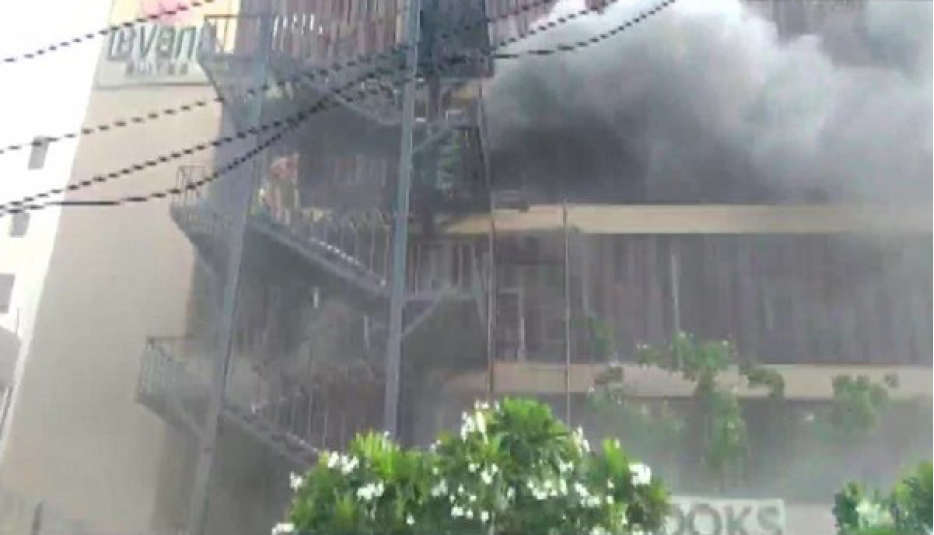 As many as two people died and 10 others are injured after a major fire broke out at Levana hotel in the Hazratganj area of Lucknow in Uttar Pradesh on Monday, said Manoj Agarwal, CMO Lucknow.

“The incident of fire in a hotel was reported this morning, after which the rescue operation is on. A fire incident took place in Levana Hotel in Hazratganj this morning, after which patients are being admitted to the hospital. So far 10 people have been admitted to the Civil Hospital, out of which 2 people are brought dead,” Agarwal said. However, rescue and relief operations are underway at Hotel Levana as several people are feared to be still trapped.

Meanwhile, Uttar Pradesh Chief Minister Yogi Adityanath took note of the fire that broke out in a hotel in Lucknow on Monday and﻿ announced free treatment for the injured. “The Chief Minister has directed the officials of the district administration to provide proper treatment to the injured. Along with this, the District Magistrate and senior police officers have been instructed to reach the spot immediately and speed up the relief and rescue work,” read a statement by the chief minister’s office. With an aim to douse the fire at the earliest, all the gas cylinders are being taken out from the hotel while flammable items are also being removed from the spot.

Police and firefighters are constantly engaged in rescue operations. “Cause (of the fire) is being ascertained. There’s a possibility that it happened due to a short circuit. 18 of the total 30 rooms were occupied & probably 35-40 people were there. The people who were stuck were evacuated and they have been sent to Civil Hospital,” said District Magistrate, Suryapal Gangwar.

“Rooms are filled with smoke making it difficult to go in. Work is underway to break window panes and grills. No info on any casualties so far, 2 people have been rescued, but there is no response from 1-2 rooms. Attempts are being made to enter those rooms,” said DG Fire, Avinash Chandra.

Three ambulance vehicles arrived at Levana Sweets Hotel after the incident was reported while the injured are being taken to the hospital. The security personnel and firefighters were seen entering the hotel with oxygen masks. An SDRF team also reached the spot.

The Union Defence Minister Rajnath Singh also took note of the incident. “I came to know about the tragic incident of fire in a hotel in Lucknow. I have inquired about the situation from the local administration. Relief and rescue operations are on. My office is in constant touch with the local administration. I pray to God for the speedy recovery of those injured in the incident,” tweeted Singh. A fire broke out at a hotel in Lucknow’s Hazratganj area in the morning hours of Monday.