Dussehra brings business back on track for effigy makers 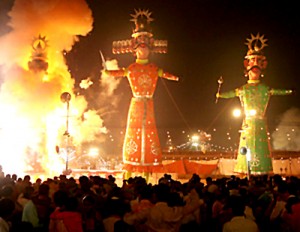 Every year, Dussehra is celebrated to commemorate the triumph of good over evil as Lord Rama killed Ravana on this day. The festival is celebrated in full swing across the country by burning the effigies of Ravan, Kumbhkaran, and Meghnath.

After a hiatus of a few years, the effigy business is getting back on track.

Earlier, Naveen, a local artisan from Titarpur in New Delhi, revealed, “People are coming back in huge numbers to book Ravan effigies. Due to Covid, during the past few years, the business was not so good, but things are getting better now and customers are back. But now, the rates of effigies are a bit higher as compared to previous times. Now it costs Rs 500 per foot. We began the preparation two months ahead of the festival and we start the deliveries two days before Dussehra.”

“During Covid, Ravan idols were made in fewer numbers. We used to create only small mannequins of 5 feet and 10 feet for the common people, who could burn those effigies on the streets. But this year, the situation is quite different. We are celebrating every festival and the effigy business is also going really well. The craze among the people for Dussehra is very high. We are flooded with bookings this year. This year, we will see a good hike in sales. We have been working day and night for the past two months to create these effigies. We create effigies from five feet to fifty feet and the pricing begins from Rs 500 per foot, “Sonu, a local artist said.

On being asked whether the firecracker ban has affected the sales in Delhi or not, Naveen said, “No, it doesn’t matter. We only construct the effigies. It’s the customer’s choice to put firecrackers in them or not. They do it by themselves. People opt for eco-friendly firecrackers to create less pollution during Dussehra. “

Effigy maker Poonam said, “Yes, we are facing a big loss due to the firecracker ban by the Aam Aadmi Party in Delhi. Every year, CM Kejriwal puts a ban on firecrackers. During Diwali, everyone bursts crackers, but only during Dussehra, he puts a ban on them. We don’t put crackers in the effigies; people bring them and put them on their own. But because of the ban, there has been a huge downfall in the number of clients. Mostly, the customers cancel their already booked orders due to the ban. If the government doesn’t want us to do our business, then simply tell us. We don’t want to face loss at the last moment. “

“The number of firecrackers has now been reduced from 500 to 300 by CM Kejriwal. We don’t put crackers in the mannequins; that’s the customer’s call whether to put crackers or not,” said Mahendra Karari, Ravan effigy creator.

Apart from making effigies during the festive season, local vendors indulge in their different businesses for the rest of the year for their source of income.

“Dussehra festival comes once a year, and we have our other source of income as well. I am a driver for the whole year. But during Dussehra, I have made Ravan since my childhood in Titarpur, said Naveen.

Karari said, “We work in the hotel line during the whole year, and some of us work in brass bands during the marriage season, and some people work at local sweet shops.”

In some regions, the celebration, also known as Vijayadashami, celebrates Goddess Durga’s triumph over the buffalo Demon Mahishasura.