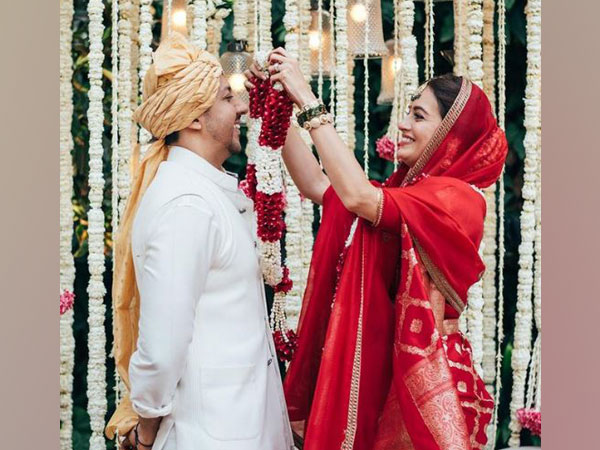 New Delhi [India], February 16 (ANI): Bollywood actor Dia Mirza shared the first official pictures from her wedding with businessman Vaibhav Rekhi. The couple got married on Monday in an intimate ceremony.
The ‘Rehnaa Hai Terre Dil Mein’ star, who tied the knot in a private ceremony attended by family and close friends, shared some mesmerising pictures of the day on her Instagram handle.
She captioned the posts as, “Love is a full-circle that we call home. And what a miracle it is to hear its knock, open the door and be found by it.”
Diya added, “Sharing this moment of completion and joy with you..my extended family. May all puzzles find their missing pieces, may all hearts heal, and may the miracle of love continue to unfold all around us. #ThankYouPreeta #SunsetKeDiVaNe” 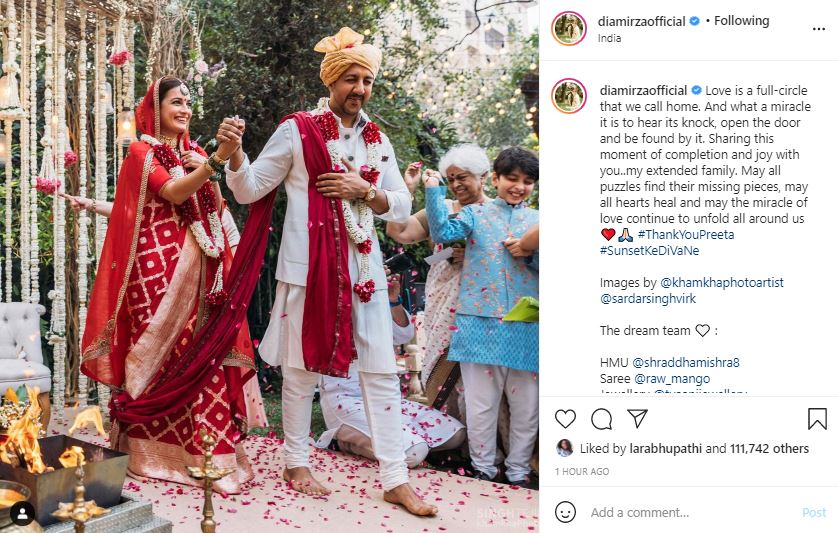 In the pictures, Dia can be seen wearing a gorgeous red saree with a red veil over her head. She accessorized her look with a large golden necklace paired with green bangles. Her husband, Vaibhav also looked dapper in his white wedding outfit and golden saafa (turban). 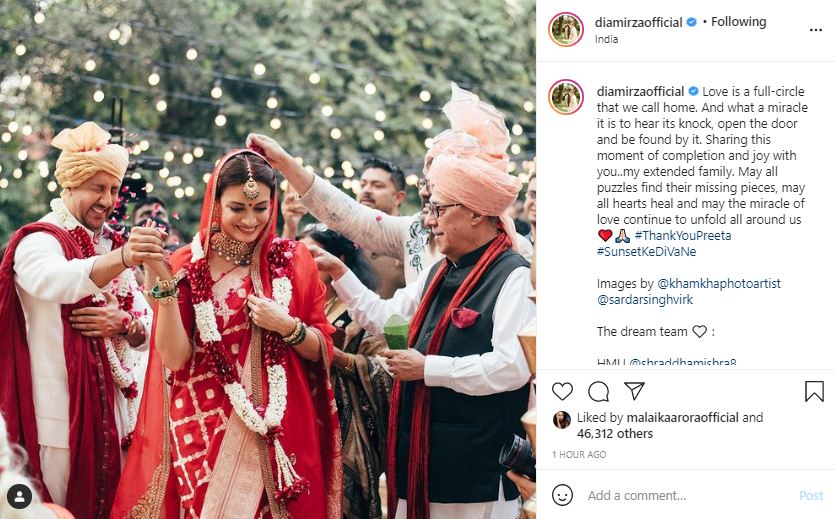 While the first and second pictures showed the couple taking ‘pheras’, a third one showed them at the ‘varmala’ ceremony and the fourth one had them sitting at the ‘mandap’.
This is the second marriage for both of them. Dia was earlier married to film producer Sahil Sangha. The couple parted ways back in 2019, after being together for 11 years. She has been rumoured to be in a relationship with Vaibhav for quite some time, but they never spoke about it publicly. (ANI) 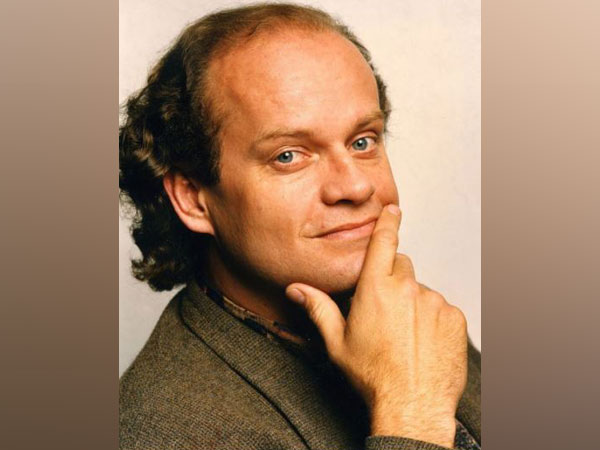 Washington [US], February 25 (ANI): The American streaming service Paramount plus, on Wednesday (local time) announced the return of the 1993 American hit sitcom ‘Frasier’ with original series star Kelsey Grammer reprising his role as Dr Frasier Crane in the show.
According to People, Kelsey who has won four Emmy Awards, two Golden Globes, a Screen Actors Guild Award and ties the record for the longest-running television character for his role in ‘Frasier’ has been roped in by the makers of the show’s revival.
Excited about the project, Grammer said in a statement, “Having spent over 20 years of my creative life on the Paramount lot, both producing shows and performing in several, I’d like to congratulate Paramount+ on its entry into the streaming world.”
He added, “I gleefully anticipate sharing the next chapter in the continuing journey of Dr Frasier Crane.”
The 66-year-old star has played the character since 1984 when he was introduced on the 1982 American comedy show ‘Cheers’ as Diane Chambers’ love interest. He also made special appearances in the 1990 sitcom ‘Wings’, which was produced and created by Cheers veterans.
His career took a boost after he bagged the lead role in ‘Frasier’, which ran for 11 seasons, for which he whooped 37 Emmys under his belt.
Earlier in 2019, when the makers of the show didn’t reveal an official statement about snagging the project, Grammer himself spilt out the beans about the revival of his much-loved show to fans.
People reported that the star, in an interview on ‘In Depth with Graham Bensinger’, that airs on Fox channel told that, he had hatched the plan of making a prequel of the show. “We’re sort of on standby a little bit. Working out a couple of possible network deals that we’re circling. Frasier is sort of in a second position to that at this point. So there’s still stuff going on. But a revisit to Frasier, Frasier’s world is I think definitely going to come,” Grammer told host Graham Bensinger.
Not disclosing much about the upcoming reboot, he only told that the series will be shot in a new city and will be based on the lead character’s desire to find love. (ANI)

Jeremy Renner to star in Taylor Sheridan’s ‘Mayor Of Kingstown’ 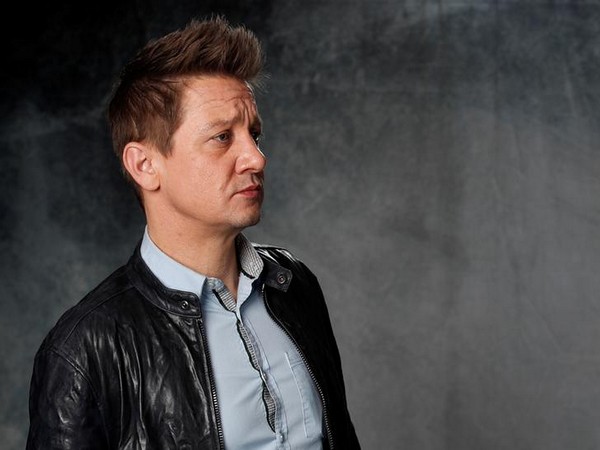 Washington (US), February 25 (ANI): Two-time Oscar nominee Jeremy Renner has been tapped to star and executively produce Taylor Sheridan’s latest series ‘Mayor of Kingstown’.
According to The Hollywood Reporter, the prison drama ‘Mayor of Kingstown’ was originally picked up straight to series in January 2020 at Paramount Network and will now move to streamer Paramount+.
Additionally, Antoine Fuqua has also boarded the series taking up the role of executive producer. This news was announced Wednesday (local time) during the Paramount+ investor day presentation.
Sheridan recently inked a new nine-figure overall deal with ViacomCBS that sources say includes series of additional projects for the streamer.
‘Mayor of Kingstown’ follows the McLusky family, who are power brokers in Kingstown, Michigan where the business of incarceration is the only thriving industry.
Tackling themes of systemic racism, corruption and inequality, the series provides a stark look at their attempt to bring order and justice to a town that has neither. Renner will play the head of the McClusky family.
As per The Hollywood Reporter, ‘Mayor of Kingstown’ is the latest linear series to move to Paramount+ as ViacomCBS bolsters the platform with originals in a bid to draw subscribers to the platform. (ANI) 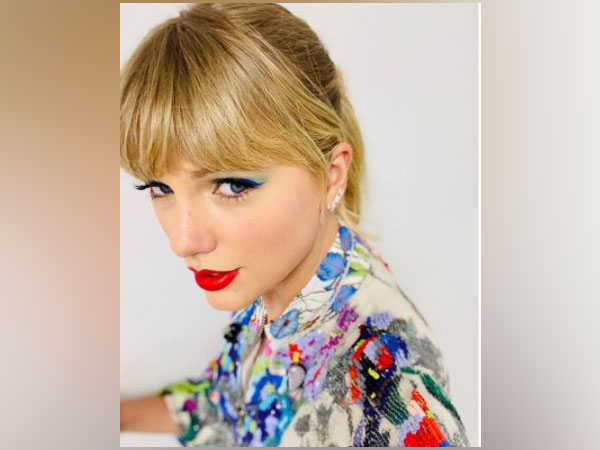 Washington (US), February 25 (ANI): American singer and songwriter Taylor Swift’s intellectual property management company has taken action against an immersive fantasy theme park in Pleasant Grove, Utah after it filed a lawsuit against the artist earlier this month.
According to The Hollywood Reporter, Evermore Park had sued Swift over the use of the “Evermore” trademark, which was the title of her 9th studio album released on December 11.
Now a new lawsuit filed by TAS [Taylor Alison Swift] Rights Management is focused on a different matter. The company claims Evermore Park wilfully used Swift’s songs without the proper licenses for some time before it filed its lawsuit.
Swift’s attorneys claim that more than a year before the park filed its lawsuit, TAS had been tipped off that the singer’s songs were being performed and played there without the requisite licenses.
The park has also reportedly played, without licenses, the works of Katy Perry, Abba, The Beatles, Billy Joel, Britney Spears, Green Day, Gotye, Journey, Nirvana, Semisonic, Third Eye Blind, Tom Petty, Queen, Weezer and Whitney Houston, among others, according to court papers filed by Swift’s legal team.
This legal filing comes 3 weeks after the park sued the singer, TAS and Taylor Nation LLC in federal court in Utah, accusing them of infringing the park’s name by using it as the title of her Evermore album and accompanying merchandise.
As per The Hollywood Reporter, Swift has asked the court to order that the park pay damages and be permanently enjoined from playing her works. Her team has also demanded a jury trial. (ANI) 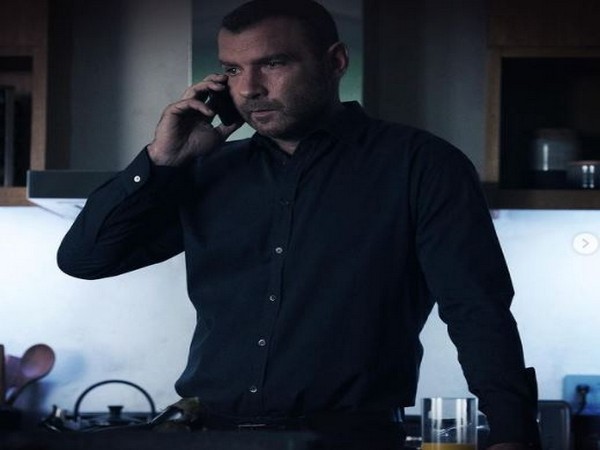 Washington [US], February 25 (ANI): Teasing fans on Wednesday (local time), the makers of the 2013 Emmy-nominated show ‘Ray Donovan’, announced its revival with a feature-length film.
According to People, after a year of dropping the plans to revive the much-loved 2013 drama series, Showtime has finally made a decision to bring back the show for the fans with a proper and planned closure to the drama starring American actor Liev Schreiber in the lead.
Gary Levine, Showtime’s co-president of entertainment, said in a statement that, “When Ray Donovan went off our air after seven great seasons, we heard from so many of its loyal fans that they were not ready to say goodbye to Ray and the wonderfully dysfunctional Donovan clan.”
“And so, for them, we are delighted that Liev and David are creating a thrilling new chapter of this iconic series,” he added.
The series had aired seven episodes which have 82 episodes in total. The first episode was aired on June 30 in 2013. The story revolves around Ray Donovan who works as a mediator for a law firm that handles celebrities and wealthy clients. While Ray is an expert in solving other people’s problems, he has no control over his personal issues.
People reported that Liev Schreiber, Jon Voight (Ray’s dad, Mickey), and Kerris Dorsey (Ray’s daughter, Bridget) will all reprise their roles in the upcoming project.
Hollander, along with helming the project, will also co-write the script with Schreiber.
Meanwhile, the production of the revival is tentatively scheduled to begin later this year in New York. (ANI) 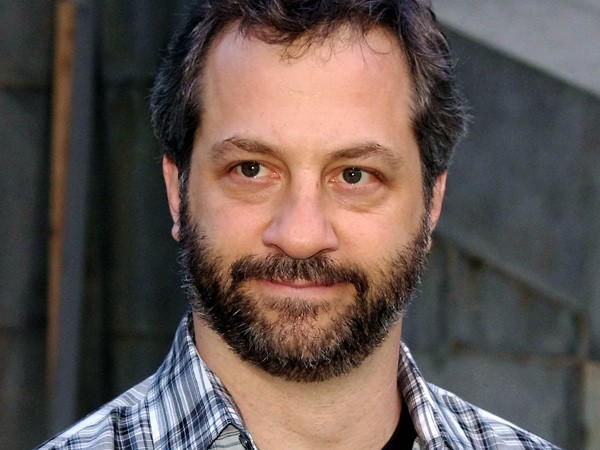 Washington (US), February 25 (ANI): American filmmaker Judd Apatow and comedy collective twins Kenny and Keith Lucas are teaming for a semi-autobiographical film for Universal Pictures, which will centre on the siblings’ lives as identical twins growing up in New Jersey.
According to Variety, with Apatow set to produce, the Lucas brothers are writing and starring in the film. Jarrad Paul and Andrew Mogel will co-write the untitled movie.
Apatow’s track record for developing semi-autobiographical comedies, speaks heaps about the filmmaker’s capabilities. His latest directorial effort was ‘The King of Staten Island’, a well-reviewed movie based on the life of “Saturday Night Live” star Pete Davidson.
As per Variety, the upcoming film marks the second movie that the Lucas brothers have in the works at Universal. As previously announced, they are developing a comedy with Phil Lord and Christopher Miller, who directed the brothers in ’22 Jump Street’. (ANI)

Lady Gaga’s dogwalker shot, 2 of her Bulldogs stolen after robbery 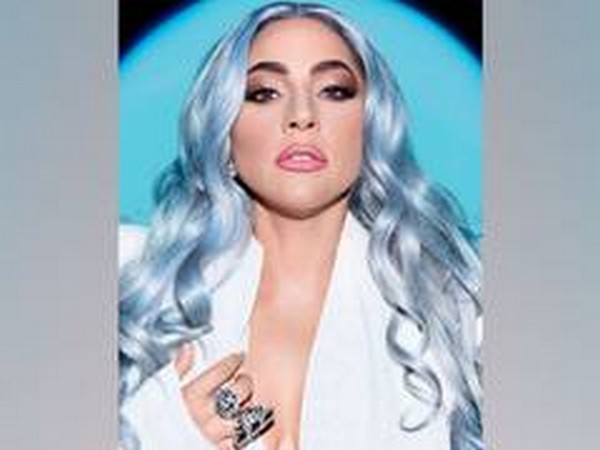 Washington [US], February 25 (ANI): Lady Gaga’s dog walker was shot in the chest and has been hospitalised on Wednesday night (local time). Two of the pop star’s French bulldogs have also been stolen after the robbery incident.
A reporter for Lady Gaga from Italy released an official statement confirming that the two dogs, were the singer’s French Bulldogs named Koji and Gustav and the victim was Gaga’s dog walker.
According to a statement given by Los Angeles police to People magazine, the incident took place at 9:40 Wednesday night.
As per reports, the dog walker was walking with three of the star’s pet dogs when a gunman shot him once in the chest. The robbers took two dogs and fled the scene. The third dog was rescued by the officers of the area.
Gaga has also offered reward money of USD 500,000 for information about the dogs.
Her reporter in a statement said, “Those with information on the case should email KojiandGustav@gmail.com.” (ANI)