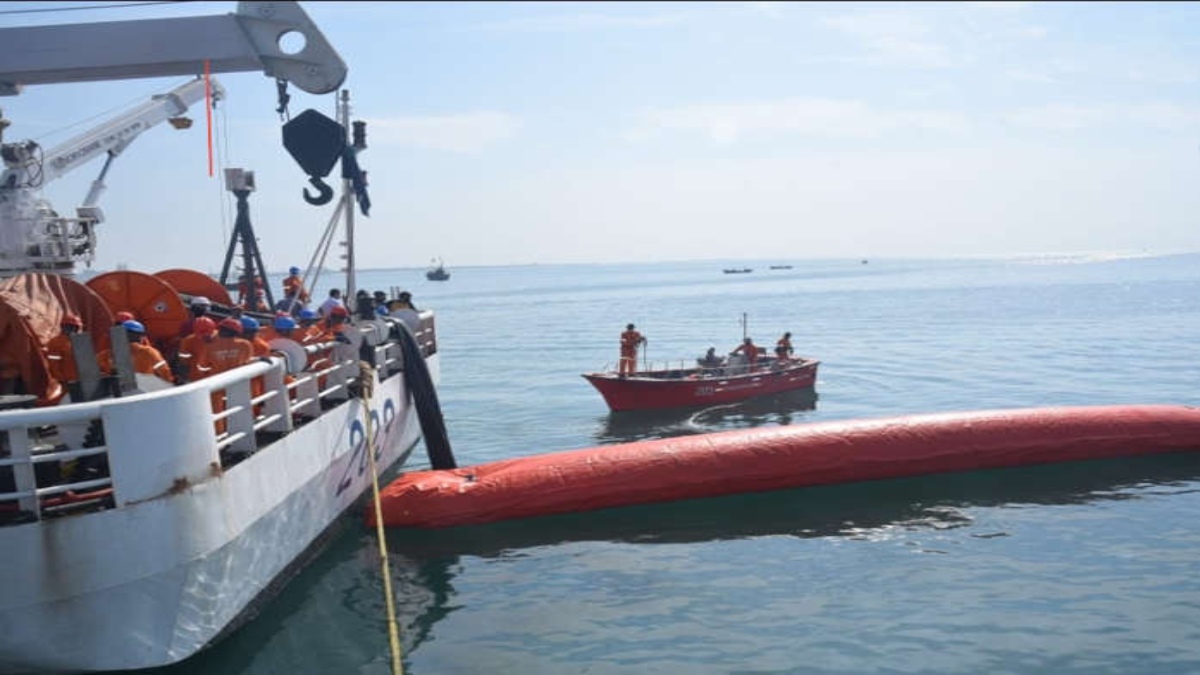 The same was conducted to revalidate the response mechanism for oil pollution incidents and enable the Indian Coast Guard to fine tune the Regional and National Oil Spill Disaster Contingency Plan.The Workshop was inaugurated by DIG S.K. Verghese, Commander, District HQs Number 1 (Gujarat). The event was attended by Deputy Commissioner (Customs), Porbandar, Deputy Conservator of Forests, Jamnagar, Port Officers from Gujarat Maritime Board and other non-major ports, officials from Petrochemical industries and other stakeholders. The workshop was conducted in two phases. Phase-I comprised of Table-top Exercise simulating oil spill while practical demonstration of oil spill equipment onboard by ICGS Samudra Pavak for containment and recovery of oil spill was covered in second phase.

During phase-I, various lectures and presentations were conducted by Indian Coast Guard and stakeholders followed by table top exercise of oil spill by oil tanker off Porbandar wherein Tier-I oil spill of 700 tons was reported to be spreading to Porbandar coast. Participants were exercised to take actions wherein the efficacy of all stakeholders including the coastal state, port facility and district administration in case of oil spill contingency was ascertained. During Phase-II, Indian Coast Guard Ship Samudra Pavak demonstrated the operation of ocean/river booms, side sweeping arms, skimmers & spill spray arm and its capability in containment, recovery and stoppage of oil spill. 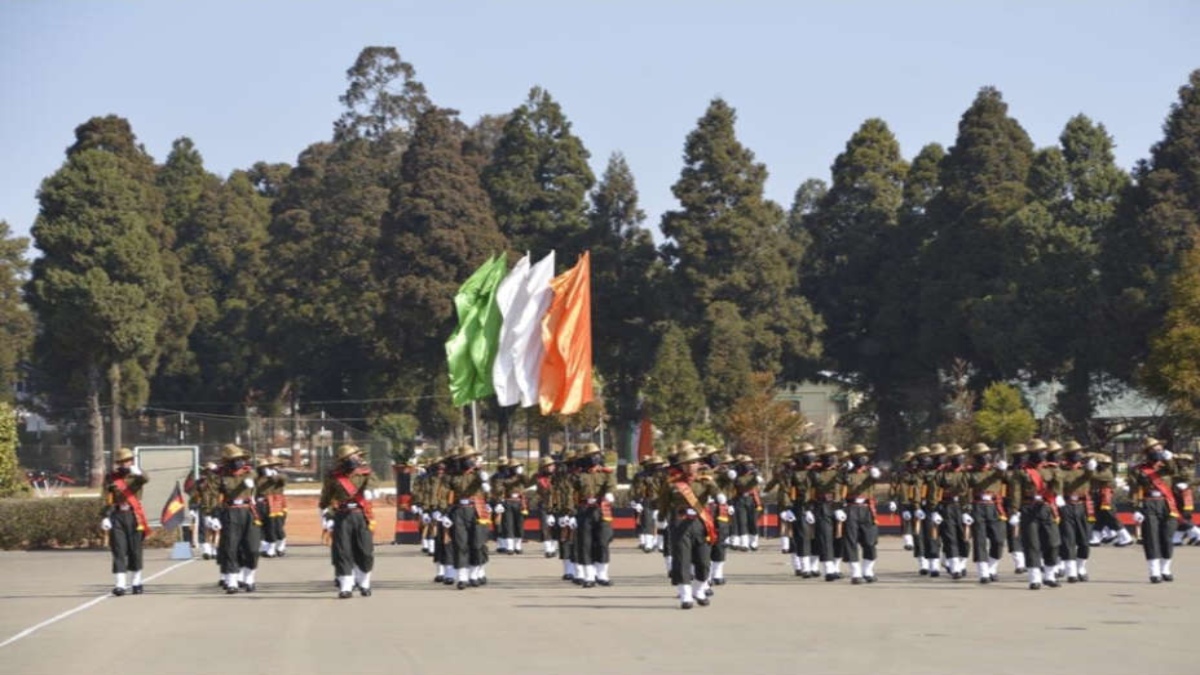 The Assam Regimental Centre held attestation parade of 331 batch in Meghalaya’s Shillong. 225 Recruits have now been attested in a scintillating ceremony conducted at Parson Parade Ground. The parade was reviewed by Major General P.S. Behl, Colonel of “The Assam Regt and Arunachal Scouts”. The ceremony was conducted with Covid-19 protocols.

The ceremonial attestation parade marks the completion of the training schedule for recruits in The Assam Regimental Centre. These young soldiers will be joining Assam Regiment Units at various locations.

Major General P.S. Behl, the Chief Guest and reviewing officer of attestation parade extolled the virtues of selfless service to the nation and recounted the contributions of the North East and Assam Regiment towards nation building. Complimenting the passing out batch for their immaculate standards, he exhorted the warriors from the North East to persevere in pursuit of excellence.

The reviewing officer also complemented the staff for having conducted the training following Covid protocols and using innovative methods which will help the young soldiers in serving the motherland in efficient manner. Swaying to the tilting tune of the Regimental song, the young soldiers erupted in joyous to mark on a successful transition from enthusiastic recruits to valiant soldiers. 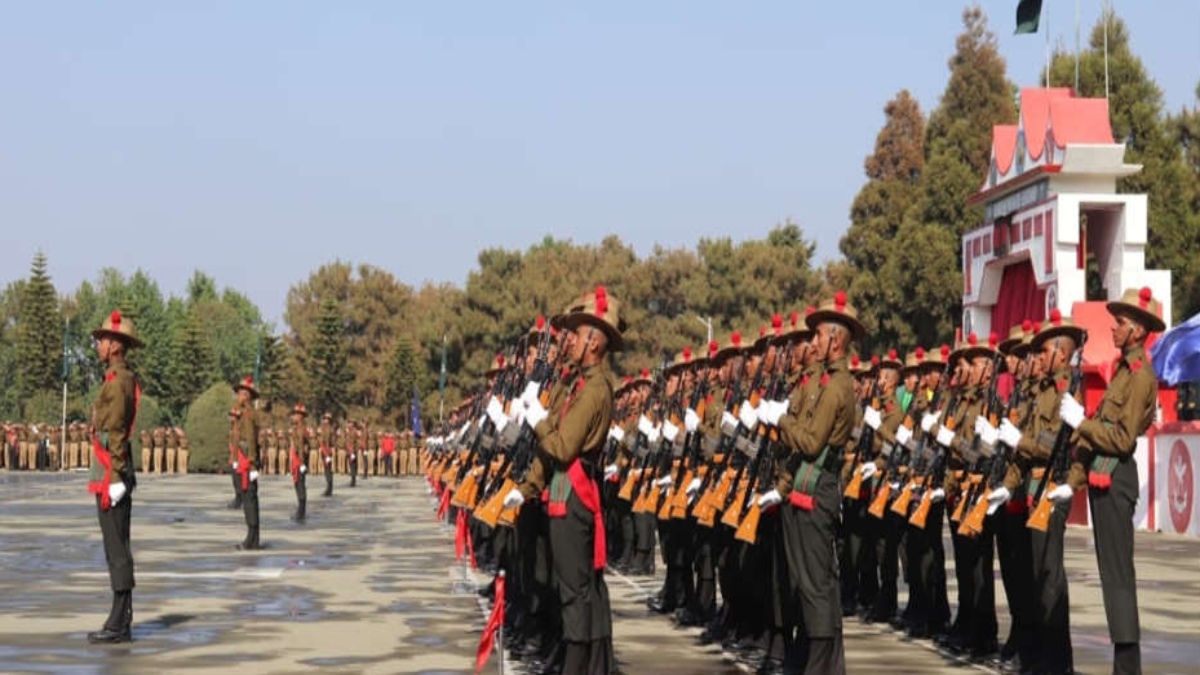 In an impressive ceremony marked by immaculate turnout and precision marching, a total of 248 Recruits took ‘Oath of Affirmation’. These young soldiers will now be dispatched to the numerous locations of Indian Army, always dedicated to protect our  Motherland whenever the need arises.

The parade was reviewed by Brigadier M Narendranath Sajan, Commandant 58 Gorkha Training Centre wherein he exhorted the Young Soldiers to strive to be the finest of Indian Army and congratulated them on this important juncture of their life. During his address, the Commandant stressed upon the importance of valour, honour, ethos & fine traditions of Indian Army.

He also complemented the staff for having conducted the training following Covid protocols and using innovative methods which will help the Young Soldiers in serving the Country in more efficient manner. In the presentation ceremony Recruit Abhishek Sakia was awarded the Overall Best Recruit & Recruit of 8 GR and Recruit Manish Ale Magar was awarded Best Recruit of 5 GR (FF). 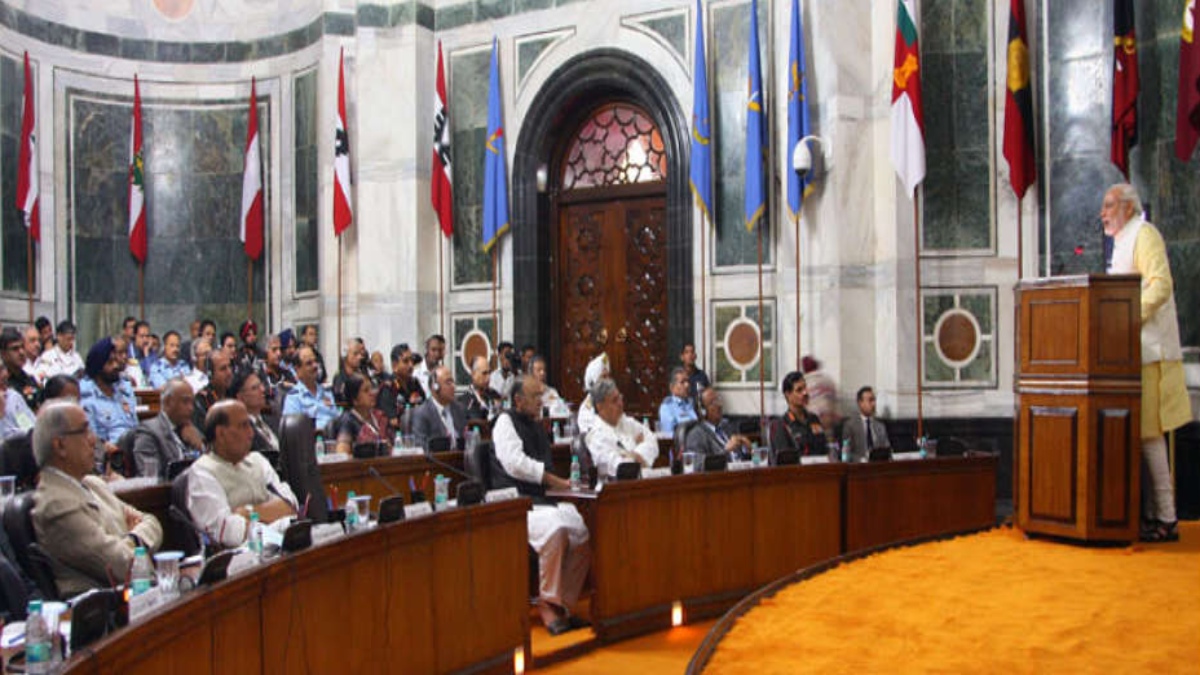 The Combined Commanders’ Conference (CCC); a premier brain-storming event of the Military Commanders from the three Services is being conducted this year at Kevadia in Gujarat. The three day conference from 4th to 6th March has the combined apex level military leadership of the country reviewing the security situation and defence preparedness of the Armed Forces, and deliberating pertinent organisational issues for evolving a joint military vision for the future.

Defence Minister Rajnath Singh will join the military commanders along with the team of Secretary level officers from the Ministry of Defence for deliberations from Day two of the conference. The Valedictory Session on the third and final day will be chaired by Prime Minister Narendra Modi with the National Security Advisor Ajit Doval also in attendance.

In a major change from the past, the scope of the conference this year has been expanded to make it a multi-layered, interactive, informal and informed event with the added participation of about 30 Officers and soldiers of various ranks from the three Services. Key events encapsulate series of discussions & deliberations on a range of issues pertinent to the Armed Forces and its role in nation building, with the participation of senior most political and bureaucratic hierarchy in addition to the multi-layered participation of military personnel.

It is interesting to note that the CCC in 2014 was held at Delhi. Since then it has been moved out to different venues across the country. The conference was held on board INS Vikramaditya in 2015 and in 2017 at the Indian Military Academy at Dehradun. The last edition of CCC was held in 2018 over a period of two days at Air Force Station, Jodhpur.

There have been several major developments in the Higher Defence Organisation since including appointment of first ever Chief of Defence Staff and setting up of the Department of Military Affairs (DMA), and several important & multifarious issues affecting modernisation & transformation of the Armed Forces are currently under active consideration/ implementation. 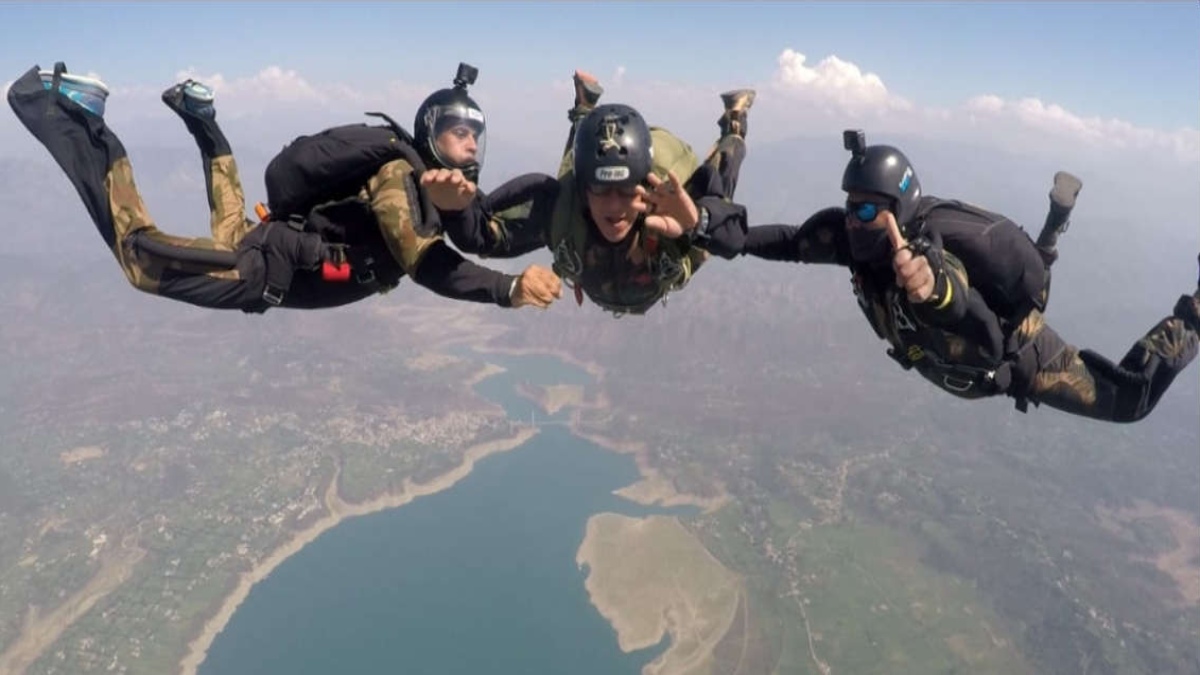 The Indian Special Forces (SF) have, over a period of time, earned immense respect and reputation of being one of the finest Special Forces in the world due to their professionalism, operational expertise, and sacrifice. Special Forces of friendly nations including the US, Australia, countries of Central Asian Region and the Middle East have increasingly shown their desire to train with the battle-hardened Indian SF troops. In response, the Indian Army‘s Special Forces have increased their engagement with their counterparts from friendly nations. 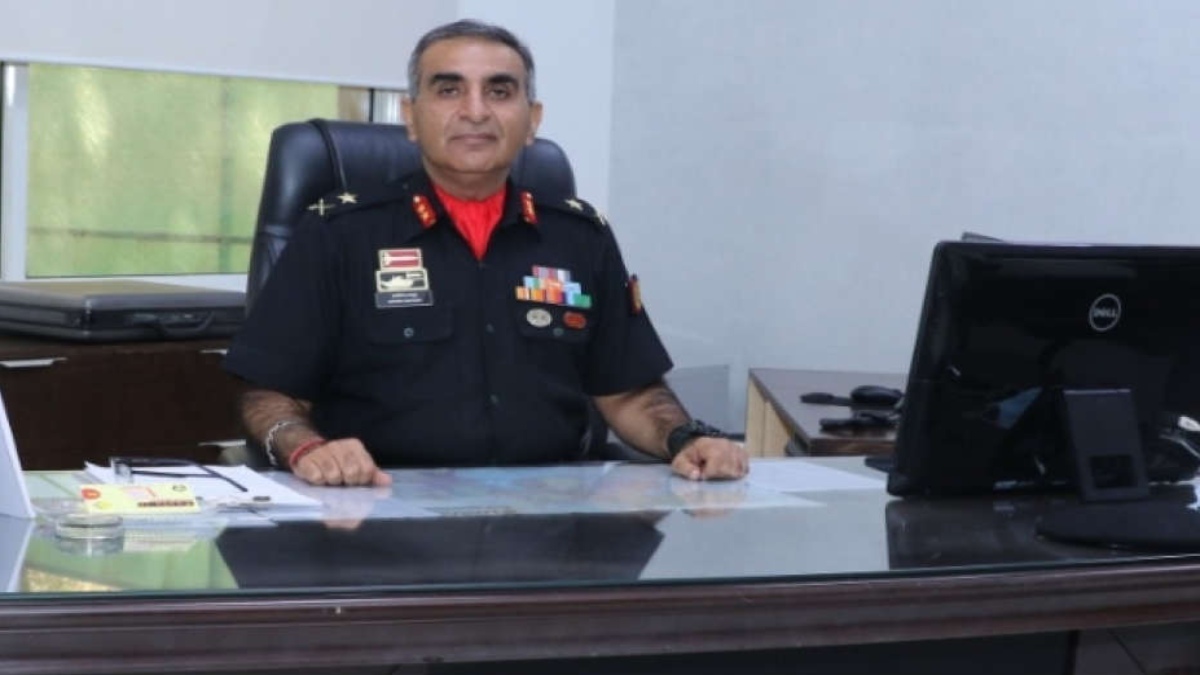 Maj Gen Arvind Kapoor an Armoured Corps Officer, is an alumni of the National Defence Academy, Khadakvasla and the Indian Military Academy, Dehradun. He is a Post Graduate in Defence Studies from Madras University.

The General Officer has rich and varied experience in serving in different terrains. He has also done tenure in NCC as Group Commander, Ahmedabad. The General Officer was posted as Chief of Staff in High Altitude Terrain in a Corps Headquarters, prior to being posted as ADG of Gujarat, Dadra and Nagar Haveli, Daman and Diu.

The General Officer has also attended all important courses of instructions, the notable amongst them include the Defence Services Staff College in Wellington, the Higher Defence Orientation Course at Mhow and the Senior Defence Management Course at Secunderabad. 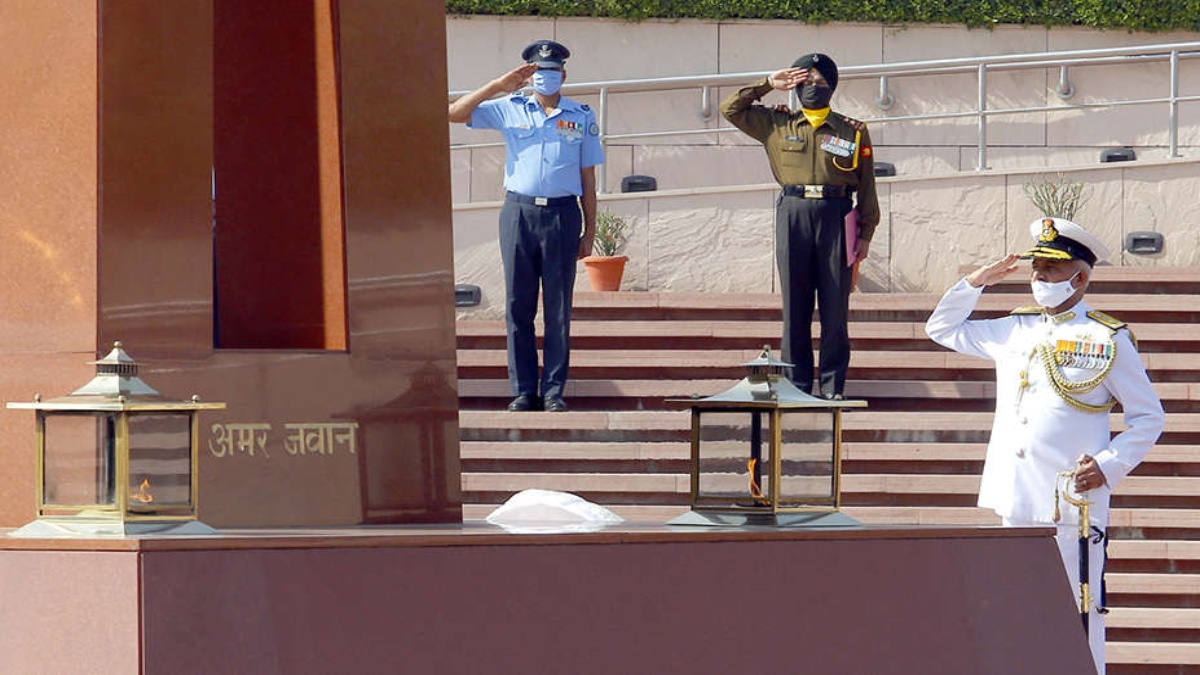 Vice Admiral Atul Kumar Jain has assumed the charge of the Chief of Integrated Defence Staff to the Chairman (CISC). Before taking over the CISC charge, he was the Eastern Naval Command Chief based at Vizag. The new Chief of Integrated Defence Staff to Chairman Chiefs of Staff Committee (CISC) Vice Admiral Atul Kumar Jain paid obeisance to fallen heroes at National War Memorial in New Delhi upon taking charge of the crucial CISC position.

Vice Admiral Atul Kumar Jain was commissioned in the Indian Navy on 1 July 1982. He is an alumnus of Sainik School Rewa, National Defence Academy (Pune), the Defence Services Staff College (Wellington), the College of Naval Warfare (Mumbai) and the National Defence College (Pretoria, South Africa).The Flag Officer is a Gunnery and Missile Specialist. During the earlier part of his career, he has held various operational and staff appointments, both afloat and ashore including Gunnery Officer of Destroyers INS Ranvijay and INS Ranvir.

He has commanded Indian Naval Ships Nirghat (Missile Boat), Khukri (Missile Corvette), Rajput (Destroyer) and the indigenous Guided Missile Destroyer, Mysore. He also had the privilege of being the commissioning Executive Officer of INS Brahmaputra and the Fleet Operations Officer of the Eastern Fleet at Visakhapatnam.

His appointments ashore include Director Naval Intelligence (Protocol), Director Foreign Liaison and Principal Director Staff Requirement at Integrated Headquarters, Ministry of Defence (Navy), New Delhi.He was appointed as the first Flag Officer Commanding Karnataka Naval Area, Karwar on promotion to the Flag Rank on 3 October 2011 as Rear Admiral. Thereafter, he commanded the prestigious Eastern Fleet and then served as the Chief of Staff, Southern Naval Command. On promotion to the rank of Vice Admiral on 1 April 2015, he tenanted the appointment of Controller Personnel Services (CPS) at IHQ MoD(N) and then served as the Chief of Staff, Eastern Naval Command, Visakhapatnam. The Flag Officer also held the appointment of Deputy Chief of Integrated Defence Staff (Policy Planning & Force Development), at HQIDS, New Delhi and was the Flag Officer Commanding-in-Chief, Eastern Naval Command from June 2020 to February 2021.