Build up to T20 WC starts as India lock horns against No.1 ranked England 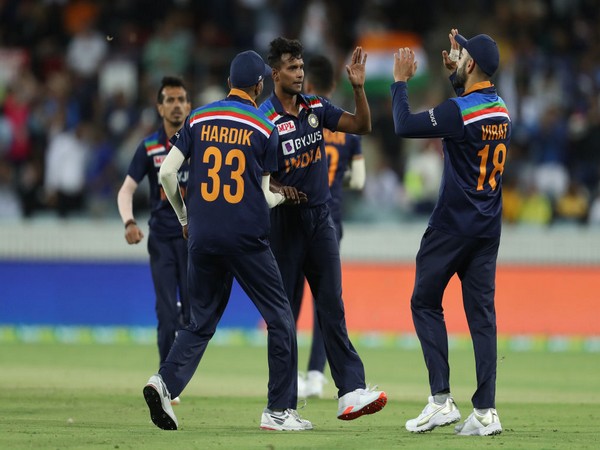 Ahmedabad (Gujarat) [India], March 11 (ANI): The build-up to this year’s T20 World Cup has begun and India would look to fine-tune their skills and decipher their best playing XI when they take on top-ranked T20 outfit England in the upcoming five-match series.
India and England will face off in five T20Is, beginning Friday and this series will give every squad member an opportunity to show their metal against the Three Lions. The Men in Blue have some newbies in their squad and all of them have high potential to start firing from game number one.
The likes of Suryakumar Yadav, Rahul Tewatia, and Ishan Kishan have impressed in the Indian Premier League (IPL) and it has finally seen them being rewarded with a place in the Indian lineup. Who between Suryakumar and Shreyas Iyer play at the number four will be an interesting watch as one would ideally think that the team management will back senior Shreyas going into the series opener.
Both Suryakumar and Ishan have the capability of striking from ball one, but Iyer’s experience and that might work in his favour as India have a power-hitting middle-order with Rishabh Pant and Hardik Pandya to come in.
Rohit Sharma and Virat Kohli would be batting at number one and three, and it only needs to be seen whether India sticks with KL Rahul or they try out Shikhar Dhawan in the first few T20Is.
Batting coach Vikram Rathour has already said that the team plans to know their best XI by the end of this England series, so it can be expected that Kohli would field the XI which he thinks would be best for the T20 World Cup.
Jasprit Bumrah and Mohammed Shami have been rested for this series and right now Natarajan’s participation in the series looks doubtful. The hosts have a problem of plenty to pick and choose from the likes of Deepak Chahar, Shardul Thakur, and the returning Bhuvneshwar Kumar.
Bhuvneshwar who is a yorker specialist at the backend might just get a nod because of his skills which have paid dividends for his IPL franchise SunRisers Hyderabad. Yuzvendra Chahal is a sure shot starter, it just needs to be seen who is given the nod as the second spinner between Axar Patel, Rahul Tewatia, and Washington Sundar.
On the other hand, England has its full strength squad in India and the visitors would be looking to field the strongest XI. The side is already ranked number one and it is for the reason that Morgan has never hesitated in playing specialists in the shortest format.
Batting has been taken care of as it is power-packed from start to end, comprising of Jason Roy, Morgan, Dawid Malan, Ben Stokes, and Jos Buttler. But bowling is a big concern as it has been seen in the past, that England has not been able to contain the run flow.
Jofra Archer’s availability for the T20I series still remains doubtful and if he is not up for selection, then it would be interesting to see who Morgan and coach Chris Silverwood choose as the seamers. Chris Jordon is one sure starter but who plays among Reece Topley and Mark Wood needs to be seen.
India’s T20I squad: Virat Kohli (captain), Rohit Sharma (vc), KL Rahul, Shikhar Dhawan, Shreyas Iyer, Suryakumar Yadav, Hardik Pandya, Rishabh Pant (wk), Ishan Kishan (wk), Yuzvendra Chahal, Varun Chakravarthy, Axar Patel, Washington Sundar, Rahul Tewatia, T Natarajan, Bhuvneshwar Kumar, Deepak Chahar, Navdeep Saini, Shardul Thakur.
England’s T20I squad: Eoin Morgan, Liam Livingstone, Dawid Malan, Jason Roy, Moeen Ali, Sam Curran, Tom Curran, Ben Stokes, Jos Buttler, Jonny Bairstow, Sam Billings, Jofra Archer, Chris Jordon, Adil Rashid, Mark Wood, Reece Topley (ANI)