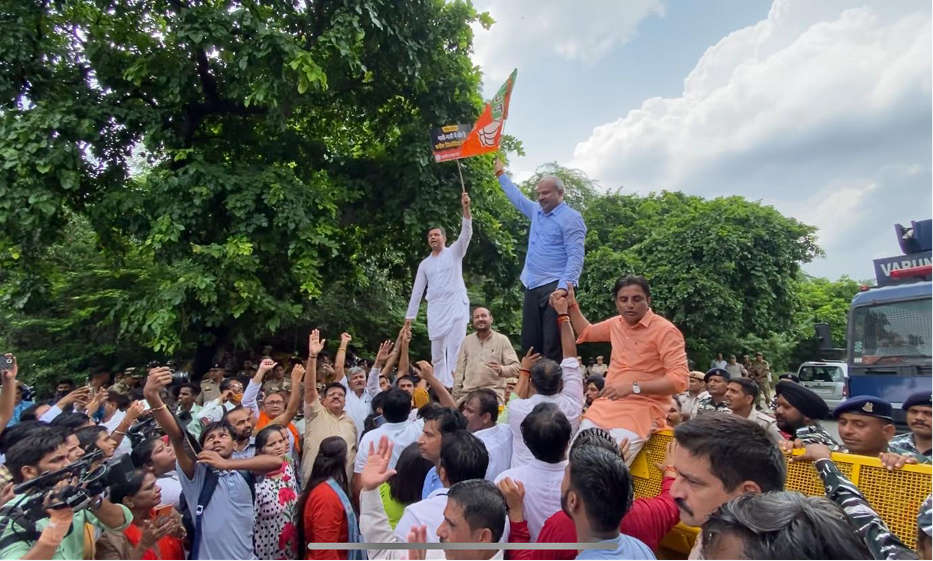 BJP Delhi leaders and a large number of workers staged a massive protest against corruption in the new excise policy outside the Delhi assembly.

A special session was called by the AAP to address issues like excise policy and poaching of MLAs.

The police used water cannons to stop the protestors. Addressing the protest, Adesh Gupta said that another name for corruption is Arvind Kejriwal, who is the most corrupt Chief Minister in the country who has only indulged in corruption in his tenure of eight years.

“After all, which development model does Kejriwal keep talking about? Opening liquor vends in the streets of Delhi, colluding with the liquor mafia to stifle crores of rupees, getting women protesting against the opening of liquor vends beaten up by bouncers and playing with the future of Delhi by making youth addicted to alcohol is the development model he talks about.” Gupta said

He further added that

‘Today, when corruption in the excise policy has been exposed, Kejriwal has kept silent.”

MP Shri Ramesh Bidhuri, said that on one hhand,Kejriwal and Sisodia play the drums of providing world-class education in Delhi, and on the other hand, they are destroying families by serving free liquor to the youth by opening vends almost everywhere in Delhi.

Former union minister Shri Vijay Goel said that when not only Delhi but the country was facing a corona pandemic crisis, Kejriwal was preparing a plan to loot Delhi. Instead of providing facilities to Delhi people during the corona pandemic, AAP was preparing to fill their pockets. He further said that it was the compulsion that Kejriwal waived off the liquor mafia›s Rs 144 crore. The party is planning to intensify its protest until Deputy CM Sisodia resigns.