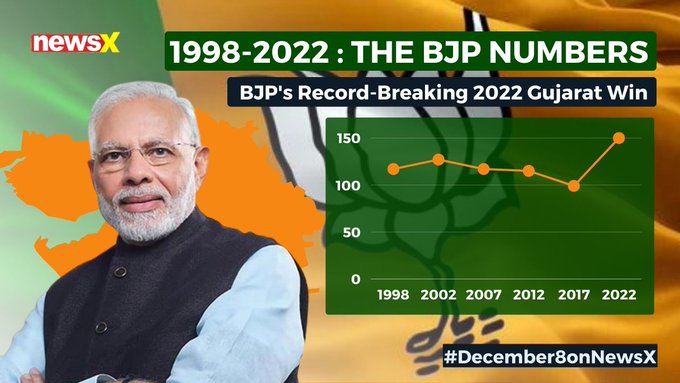 Since 1995 Bharatiya Janata Party has not lost an election in Gujarat and once again BJP has gained a majority in the Gujarat Assembly election 2022. The total number of seats in the Gujarat Constituency is 186 seats.

The Bharatiya Janta Party (BJP) leads in 156 seats, Congress in 17 seats, Aam Aadmi Party in 5 seats, and Others in 3 seats.

On the Gujarat election result Union minister Hardeep Singh Puri said, “I’m commenting on something which was widely expected. It’s the actual manifestation of the kind of development-anchored work that the BJP, under the leadership of PM, has been undertaking. It’s a model for the whole country.”

Talking about Gujarat polls Aam Aadmi Party Deputy Chief Minister Manish Sisodia said, “Through the votes of Gujarat, AAP is becoming a national party. For the first time, politics based on education and health is getting recognition in the country. Congratulations to the people of India.”

Earlier, exit polls predicted a return of the Bharatiya Janata Party in Gujarat by breaking all the records by the ruling party.

However, the Assembly election in Gujarat was held on 1 December and 5 December in two phases.

Furthermore, for 27 years BJP party has been in power and Narendra Modi is the longest-serving chief minister of the state. In 2017 BJP won 99 seats out of 182 seats.