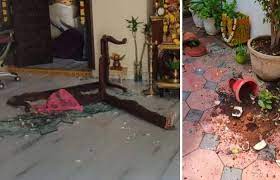 The family members of Arvind Dharmapuri, the BJP’s Lok Sabha MP from Nizamabad, have been attacked and his house vandalized, allegedly by the workers of Telugu Rashtra Samiti (TRS) on Friday, according to a statement from the office of MP Arvind Dharmapuri.
Taking to Twitter, Arvind Dharmapuri wrote, “TRS goons attacked my house in Hyderabad on the orders of KCR, KTR, and Kavita. They were breaking things in the house, creating chaos, and threatening my mother! TRS goons attacked my residence and vandalised the house. They terrorised my mother & created ruckus”. It is alleged that the TRS workers have damaged the house of BJP MP Dharmapuri after he made remarks on the MLC Kavitha Kalavkuntla on Thursday at a press conference. Notably, in a press conference yesterday, the BJP MP attacked TRS MLA and Telangana CM’s daughter, K Kavita, and claimed that she has received an offer from Congress president Mallikarjun Kharge to switch sides and join Congress.
Dharmapuri, in the said press conference, also mentioned KCR as the “Silly CM in the entire country!!”.
The exchange of words between K. Kavita, Dharmapuri, CM KCR, and his son KTR has been going on for a long time. In yesterday’s statement, Dharmapuri questioned KTR over his statement of the BJP trying to lure his sister and asked, “KTR, what should we do after buying Kavita?? We are not a party that is running a business to get Kavita!!”.
In response to Dharmapuri’s remark, K. Kavitha stated that he has done nothing for Nizamabad and that she will compete against him from wherever he runs for office.
Meanwhile, Telangana Rashtra Samithi workers allegedly attacked Nizamabad BJP MP Dharmapuri’s Banjara Hills residence. During the time of the attack, the BJP MP was in his Lok Sabha constituency.
Notably, the BJP MP has been vocal about the policies of the K. Chandrashekar Rao-led Telangana government and has attacked him on several occasions over his policies and governance.