BJP leaders escorted out of Delhi assembly - The Daily Guardian 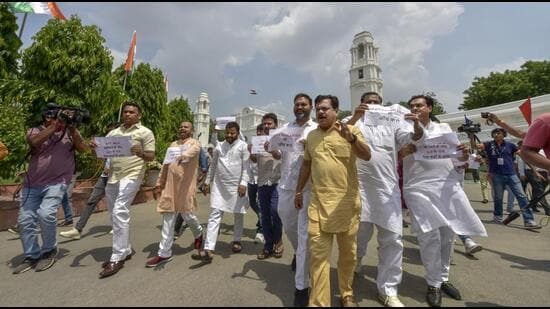 Vijender Gupta, Mohan Singh Bisht, and Abhay Verma, three members of the opposition Bharatiya Janata Party (BJP), were escorted from the Delhi assembly after they objected to deputy Speaker Rakhi Birla’s denial of their motion to call attention, which was presented before the confidence motion for chief minister Arvind Kejriwal was discussed and voted on.

The opposition leader, Ramvir Singh Bidhuri, objected to and dubbed the motion of confidence a charade. Hence, all 62 of the Aam Aadmi Party’s (AAP) legislators, according to him, have faith in Kejriwal’s council of ministers, so there is no need for it. “The annual cost of running the house is Rs. 77 crore. Therefore, the House should talk about Delhi-related matters.”

The BJP members continued to demonstrate because they said their requests for discussions on topics, such as the excise policy, had not been taken into account. Other BJP members staged a walkout while Gupta, Verma, and Bisht were marshalled out.

According to Birla, the opposition was not sincere in bringing up its concerns in the legislature. “No member personally brought them up if there were any problems. All opposition issues will be discussed; after the motion of confidence vote, no other items will be discussed.”