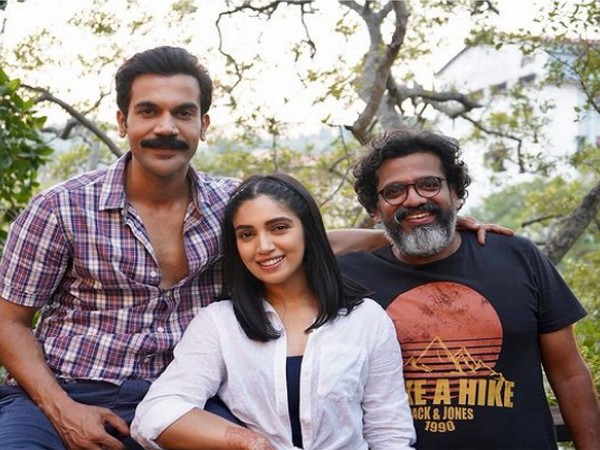 New Delhi [India], March 6 (ANI): Bollywood actor Bhumi Pednekar announced the wrap-up for her next family comedy movie ‘Badhaai Do’ on Saturday.
The movie that will see powerhouse entertainers Rajkummar Rao and Bhumi Pednekar sharing the same screen for the first time, is finally wrapped.
Announcing the same, the 31-year-old actor took to her Instagram and shared two pictures with her co-star Rajkummar and filmmaker Harshavardhan Kulkarni.
In the caption, she wrote, “It’s a wrap for Shardul & Sumi 🙂 This picture does no justice to what we & the entire team felt while shooting this film – Pure love for each other, constant laughs & memories for a lifetime #BadhaaiDo @rajkummar_rao & #harshwardhankulkarni you both are,” using a red heart emoticon.

She further thanked and acknowledged her whole team and wrote, “And my entire team – Thank You For Making This Such A Memorable One. I feel lucky to have worked with you guys.”
Ever since the sequel of ‘Badhaai Ho’ has been announced, fans have been elated to witness the comedy-filled family entertainer. With the addition of Rajkummar and Bhumi as the lead stars for ‘Badhaai Do’, the film already promises to impress.
‘Badhaai Ho’, back in 2018, was one of the most successful movies that also won a National Award for the Best Film in 2019 for its unconventional storyline and impactful yet convincing performances.
While Rajkummar plays the role of a cop in the second installment, Bhumi will be seen playing a PT teacher with big dreams in the film.
‘Badhaai Do’ is a family comedy that revolves around an unlikely relationship and promises double the fun and emotions. While the story and characters of ‘Badhaai Do’ are different from that of ‘Badhaai Ho’, there is a common theme between both films as both are family-oriented films that will be endearing to the audience.
Helmed by Harshavardhan Kulkarni, the film went on floors in January this year. (ANI)